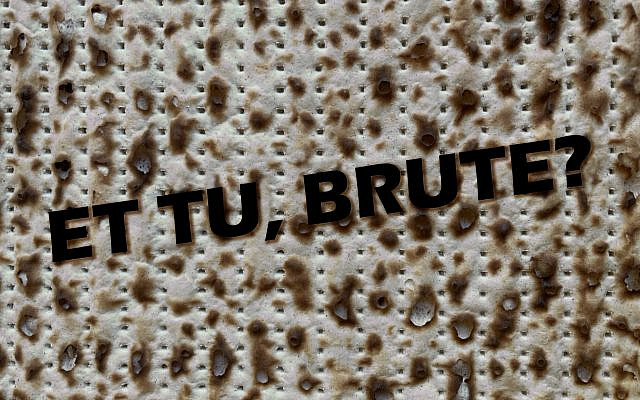 It was reported that Doug Emhoff, the Second Gentleman and husband of Vice President Kamala Harris, hosted a pre-Passover Seder at the White House. Apparently, his remarks were influenced by a National Council of Jewish Women’s (NCJW) Haggadah.

Let’s stop for a minute and consider the betrayal, irony, and hypocrisy imbedded in what might look like a well-intended ecumenic outreach.

The tradition of White House Seders goes back to 2009 and President Obama. He also hosted Channukah celebrations. When not throwing fun parties, Obama, along with Samantha Power, in spite of publicly proclaiming “having Israel’s back,” stabbed Israel in the same proverbial back with their 2016 lame duck support for the unfair and one-sided anti-Israel United Nations Resolution 2334.

Daniel Greenfield’s recent article in the Jewish News Syndicate, The National Council of Jewish Women’s apologists for anti-Semites: What do Stalin, Omar, Sarsour and Clarke Have in Common details the sad story of the NCJW’s endorsement of Kristen Clarke for Assistant Attorney General for Civil Rights Division. Clarke has an abominable anti-Semitic and anti-Israel record that includes lowlights of endorsing Tony Martin, supporting Sarsour and Mallory, and advocating for #JusticeDelegation.

Is the NCJW blind to these issues or have they simply sold out to a far-Left agenda that cozies up to fashionable woke-cancel-intersectionality doctrine? Does the NCJW, in the name of political correctness and endless forgiveness, hungerly consume some sanitized version of history?

So, while the White House Seder’s festive meal was served, you can wonder if the virtual guests worried about the rogue’s gallery of recent anti-Israel appointments that the Biden Administration has selected. In addition to the Iran-placating JCPOA troupe of John Kerry, Wendy Sherman and Tony Blinken, consider the selection of Rob Malley, Maher Bitar, Colin Kahl and Matt Duss. They all have very troublesome anti-Israel records and now are in positions of power and influence…and we should be very worried.

To unravel the sleeve even more, consider that Jonathan Greenblatt, Anti-Defamation League’s CEO wrote in a letter on Feb 19, “Clarke will bring much needed and well-rounded experience in the defense of civil rights to the position of Assistant Attorney General for Civil Rights.” The ADL, under the leadership of the ex-Obama White House aide Greenblatt, has simply become a public relations arm for the Far-Left Democrats.

Some “Jewish” organizations have moved so far from their roots that they have lost their credentials as pro-Jewish or pro-Israel. The revered Hebrew Immigration Aid Society transitioned to the acronym HIAS jettisoning the “Hebrew” nomenclature. Today, the bulk of HIAS’s effort and funding now goes to settling non-Jews. Ironically, Dianne Lob, the past Chair of HIAS will be the next Chair of the Council of President of Major Jewish Organizations.

The fable about two frogs comes to mind.The first frog fell into a pot of boiling water and quickly jumped to safety. The second frog who found himself in tepid water that was slowly heating, remained and was soon cooked to death. America’s steady drift to the Left, led insidiously by the media and academia and big tech, is laced with race theory, revisionist history and anti-nationalism dogma dangerous to Jews and Israel.

Partisan progressive politics focuses only on the faults of the opposition and precludes thoughtful, fair-minded advocacy? Too many have accepted postmodern gibberish that portrays tiny Israel as a colonial despotic empire. Most dangerously, they have turned the two millennia long suffering Jews into a White Supremist/Privilege terrorist horde. These societal trends may be slow, but like the second frog, our world is being irrevocably altered and the implications may be fatal.

We must encourage all Jewish and pro-Israel organizations, including synagogues, educational, charity, social and political action entities, to wise up and recognize the menace of cultural “witch trials” stoked with feelings and opinions that replace cold, hard facts. Our legacy is revealed in the Bible and our story is validated by the archeology of Israel. Self-doubt and self-deprecation give comfort to the enemy.

The famous line from William Shakespeare’s Julius Caesar, “Et tu, Brute?” (And you, Brutus?) feels relevant. It captures the horror of raw betrayal by a trusted friend.