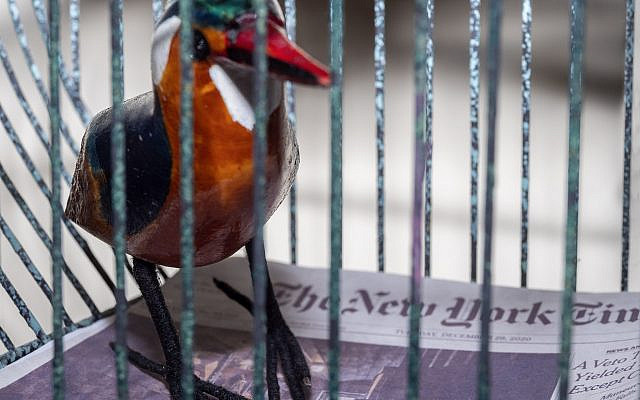 If I had a pet bird, lining the bottom of the birdcage to catch droppings would be pages from The New York Times.

The New York Times claims to be America’s “newspaper of record,” but does it fulfill the requirement to deliver the highest standard of journalism? Does this publication demonstrate balance, accuracy and a consistency not altered by the ebbs and flows of society and politics? Is it a standard of excellence? Is it a just mouthpiece for one of the political parties?

You don’t have to look further than contrasting The New York Times deafening silence on Congressman Eric Swalwell to their abetting the woke-inspired character assassination of young Mimi Groves by an 18-year-old University of Tennessee student. The absence of the Swalwell story and the grungy Groves reporting provides rock solid evidence that something is very wrong at the Times.

The “case” of Democrat California Congressman Swalwell is movie worthy. If it was a film, I would offer a spoiler alert for this R-Rated release. Just in case you haven’t read about Swalwell, he was sleeping with a cute Chinese spy who raised money for his campaigns. Once elected to Congress, he was appointed to the Intelligence Committee by Speaker of the House Nancy Pelosi. Congresswoman Pelosi continues to staunchly defends her decision claiming not to see any national risk.

This same Eric Swalwell spent your taxpayer money prosecuting a failed case against Donald Trump for Russian collusion. Over the past four years, Swalwell never missed an opportunity to grab airtime to breathlessly, and with morally superiority, warn of the sure fire, but ultimately debunked, criminal activities of our President, the unratified impeachment and his misgivings about Judge Kavanaugh. The New York Times never missed a morsal of these stories.

Regarding Mimi Groves, her offending three second video snippet contained the “N-word” …not directed at anyone specifically. The “stink bomb” evidence was held by fink Jimmy Gallagan for three years, and then released just as she was seeking college admission. The New York Times ensured national attention when it chose to report on this creepy little story.

So, why does The New York Times not have the curiosity or the ink to post at least some commentary about the highly questionable behavior of Swalwell? You would think national security risks, sex, influence peddling and coverups would do the trick. Is their choice indicative of some greater rot in our society? Does their dishonest treatment invalidate the “All the news that’s fit to print” motto and harm America?

We are continuing our dizzy waltz in a maddening world and we want to trust heretofore revered institutions like our universities and newspapers. American schools are becoming tools for indoctrination, and not education. Papers like The New York Times, big tech and mass media outlets provide highly targeted and selective propaganda, not journalism. The frustrating hypocrisy, cynicism and woke-revisionist double talk drive us crazy and we are left gasping for sensibility in an air of unreality. It’s political and social hypoxia.

Maybe there are just too many rats on this ship…maybe there is a malign gene that causes people to not know how to live reasonably and enjoy the benefits of advanced civilization. Now mind games, psychological warfare and 1984 double speak are the weapons of choice. It is “reality” in short supply. It is a communal road rage stoked by hatred a of facts and history.

Our form of democracy includes a ticking time bomb referred to as the “tyranny of the majority.”  Without unfettered knowledge, the critical eye of the Fourth Estate, and a respect for the truth, our citizens will be manipulated and misinformed. They will not thoughtfully cast their votes and will get the leaders we don’t deserve.

Is The New York Times a tool for obfuscation and guilty of subversion?