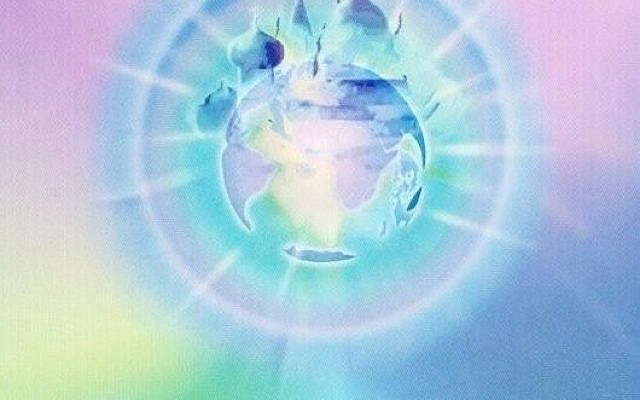 Successful Mandala meditation will result in illumination, transfiguration and self-realisation. Its aim is to enter into the reality of the New Heaven and the New Earth as New Human Beings! Source of the picture: Back cover of the book The Testament of Truth – Manifesto by Leon Moscona; design Svetlana Gushmakova.

One of the main tasks of the Mandala of the Heavenly Jerusalem is to provide a basis for reflection, meditation and initiation.   For this purpose, it converts some of the greatest visions in the spiritual history of humankind, such as those of Moses, Krishna, Buddha,  Jesus Christ, Muhamad, Beinsa Douno and others into a constructive field for inspiring spiritual work.

As we saw in the previous Post, Heavenly Jerusalem as a Majestic Zodiac-Mandala,  each one of the twelve Gates in the Holy City is a Gate of a particular initiation and leads to the Celestial Temple of that initiation. We can call them Temples, Palaces, Mansions, Gardens, Worlds, but in essence they encompass the totality of the Universe and enshrine life in the presence of the Living G-d.  Each celestial Temple represents a unique aspect of Creation and the wholeness of the human being as its micro-model.  Figuratively speaking, we can relate each celestial Temple to a unique metaphysical architecture modelling the Universe.  Here it is interesting to note that many earthly temples, such as the Buddhist Pagodas, the Hindu Temples,  the Gothic Cathedrals and others, reflect symbolically some essential features of the structure of the Universe in accordance with their traditions.

The Highest Priests and Priestesses in the Temples are the Masters themselves and their Feminine Counterparts.  They manifest one or another universal aspect of G-d and fill the whole Temple with Divine Light, Love, Wisdom and Truth.  The Masters, surrounded by their closest disciples (the Elders, Bodhisattvas, Gurus, Saints, Friends), in union with their Feminine Counterparts, perform an eternal  Divine Service before myriads of their followers.  They shine with dazzling white Light which integrates all colours of the Divine Rainbow and  reveals the ultimate Truth about G-d, Creation and the Human Being.  All Temples have a common transparent altar – in front of the Throne of God, from where the Masters and their Feminine Counterparts perform the eternal Service.  In each Temple, however, the altar (the concept of the Throne of God) takes a different form, the one most appropriate and inspiring for the followers of the particular tradition, but transparent to the others. In these Celestial Temples we could receive the initiations of the Masters.

In this Post it is impossible to describe, even to list, the great variety of types of meditations based on the Mandala.  For illustration let us take just one example of a Mandala Meditation.  Figuratively speaking, we can name this meditation ‘Knocking at the doors of the Heavenly Jerusalem’.

If we meditate on mantras and spiritual formulas from the various religions, they will serve as keys which will enable us to enter into the spiritual worlds of these religions. For instance, the sacred sentence I am that I am in Judaism is the key to the Hebrew monotheism and to the essence of the Absolute Origin of Creation.

Yet another example is the key formula in the Quran – Lä iläha ill’ Alläh.  ‘The most fundamental formula of the Quran is the first Shahädah, that is, witness or testimony, La iläha ill’ Alläh, which is the fountain head of all Islamic doctrine, the alpha and omega of the Islamic message.  In it is contained all of metaphysics.  He who knows it knows everything in principle.  It is both the doctrine and the method, the doctrine because it negates all relativity and multiplicity from the Absolute and returns all positive qualities back to God, the method because it is the means whereby the soul can combat against the enemies within.’ (Seyyed Hossein Nasr, Ideals and Realities of Islam, Unwin Hyman, London, 1988, p. 61)

So, by meditating on the quoted sacred sentences, we can link with the Kabbalistic, Buddhist and Muslim worlds, and taste the flavour of their approach to the essence of the ultimate reality. Thus, metaphorically speaking, we will knock at the doors, and even enter, in their Temples. In a similar way, we can find appropriate mantras or formulas fitting for other spiritual traditions – for example, Om Tat Sat Chit Ananda (Hinduism), I am the Resurrection and the Life (Christianity), God is Love, God is Wisdom, God is Truth (the Tradition of the Master Beinsa Douno), etc.

Christianity:      I am the Resurrection and the Life

The Master Beinsa Douno:  God is Love, God is Wisdom, God is Truth

The Holy Spirit: Holy, Holy, Holy Is the Lord God Almighty Who was, Who is, and Who is to come

Beginning with the singing of OM three times in rich harmony concentrates the mind on the highest vibration of the Universe and creates the spiritual atmosphere within the group.  After 3-5 minutes the group continues by saying three times the first sacred sentence, I am that I am.  The purpose of this sentence is to activates the vibrations of the Name of G-d.

For 5-10 minutes (depending on the spiritual stream within the group and the spiritual contact of the leader of the meditation, if there is such) the group concentrates and meditates on the Kabbalistic spiritual world.  The purpose of this short meditation is to link with the love and light emanating from the World of Creation, to feel the blessings of G-d, to enter into the Heavenly Jerusalem through this gate and to receive the living fruits of illumination from the Kabbalistic Celestial Temple. We have to experience this Temple as one of the ‘many mansions’ in the Heavenly Jerusalem.  In a similar way, we meditate on each of the other spiritual formulas and then finish the meditation with singing OM.

Groups performing this Mandala meditation can of course vary the formulas and the mantras.  Moreover, it is very important to include formulas which invoke the spiritual presence of the Feminine Counterparts of the Divine Masters as well. Groups are also encouraged to add appropriate mantras and formulas for other traditions if they know the spiritual gates which these traditions open. Whatever the choice, however, each group should adhere to the  main  purpose of  this  Mandala  Meditation – to link in love, joy and harmony with many existing spiritual traditions, and to knock at their initiatic doors leading to the Heavenly Jerusalem.

The Mandala Meditation can be done not only with formulas and mantras but also with music appropriate for each spiritual tradition. Any time of the day is suitable for performing the meditation but of course the most powerful times are sunrise, noon, sunset and midnight. The Mandala Meditation can also be done in any place, but obviously sacred places, hills, mountains and the outdoors are preferable.  The number of participants may vary from a single person to groups of thousands.

The suggested Mandala Meditation, ‘Knocking at the doors of the Heavenly Jerusalem’, is just one example of a possible Mandala Meditation.  It is evident that the Mandala of the Heavenly Jerusalem contains an enormous potential for reflection, contemplation and meditation.  We can summarise that through Mandala Meditations human consciousness will enter into a new cosmic-spiritual system of co-ordinates in the Kabbalistic World of Creation. In it will be balance, synchronisation and constructive harmony between all polarities: between heavenly and earthly forces, masculine and feminine Divine energies, micro and macro, inner and outer planes of existence of the human being, between the past, present and future in the spiritual history of humankind, between East and West, North and South in human cultures and so forth.

Successful Mandala meditations will result in illumination, transfiguration and self-realisation.  In love, joy and ecstasy we will enter into the reality of the Holy City, the ‘new Jerusalem coming down out of heaven from God’.  It will appear before us as a living heavenly Mandala illuminated by the great light of all the Divine Masters and their Feminine Counterparts.  In this high state of consciousness, we will merge with the universal bodies of the Divine Masters and will receive their initiations in the Temples of the Holy City.  Thus, the prophetic words will be fulfilled: The name of the city from now on will be, ‘The-Lord-Is-Here!’   (Ezekiel, 48: 35); Now God’s home is with mankind!  He will live with them, and they shall be his people.  God himself will be with them, and he will be their God. (Revelation 21: 3)