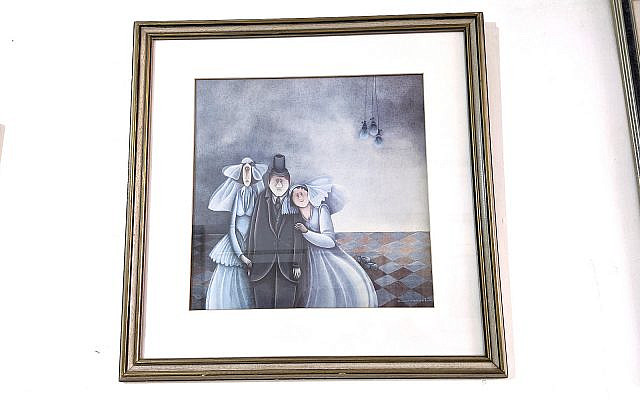 I’ll start from the end because it’s more interesting and since most of you don’t read past the first few lines (I don’t blame you, I blame Bezos or Zuckerberg, or Mother Theresa or whoever the heck ruined our collective attention span.)

They’re demolishing a block of old buildings in Or Yehuda, the gem of a town I’ve called home for the past seven years, and preparing it for pinui binui, which is some kind of scam contractors do to get free apartments by renovating or completely rebuilding decrepit apartment houses and replacing them with high-rise eyesores in which the former tenants get an upgraded apartment, an extra bedroom, an elevator and a buttload of added city taxes. Shoot, that was a run-on sentence. See, I told you to stop reading.

Anyway, we’re greeted at the entrance to the ruins by the town’s only homeless person, Gabriel, who lives behind the sign announcing the entrance to this wonderful city. Usually, he’s collecting cardboard boxes (on a mission from the mayor, no less!) or offering slightly expired milk to anyone and everyone who makes eye contact. But on this day he was apparently tasked with “guarding” the entrance to these soon-to-be-demolished square, gray housings. My wife and I politely declined his offer of milk (It’s only a few days past the expiration!) and decided to venture into these abandoned homes to take pictures (and unscrew a vintage mirror in one of the second floor apartments) that my wife had spotted from the street the day before.

We climb the stairs, stepping on broken glass and rubble and make quick work of unscrewing the mirror. Having completed the mission, we decide that, heck, since we’re already trespassing, might as well check out the other floors. Due to some recent run-ins with the law, we coordinated our stories should we get arrested: it was all my mother-in-law’s idea.

Amongst the emptied cabinets (apparently, we weren’t the first ones to ransack) and old relics of lives once lived (school notebooks, broken furniture and magnets from long-forgotten bar mitzvahs and weddings), my wife finds a lone framed picture on the wall by her favorite Israeli artist, Avigail Yoresh. It’s hanging on the wall, in perfect condition as if waiting for her. It made her giddy and cheerful, something I’ve barely managed in our 12 years of marriage. It was an odd sight, as most of the other framed pictures in these apartments, formerly owned by the poor religious Iraqis and Georgians of Or Yehuda, were shattered frames of the Baba Sali or some other religious icon.

Now let’s go back to the beginning. I’ll get to the middle at some point. Hopefully.

2016. My wife is begrudgingly accompanying me as I take street photos of unsuspecting people in Tel Aviv. I spot a trash can with a piece of framed art and go elbows deep in the trash to pull it out. I see a signature – Avigail Yoresh. She covers her face in shame as I celebrate my find. It depicts a caricaturish groom with two women by his side. After much debate, we couldn’t agree on which one of the women was his mother and which was his bride. In any event, to her chagrin, I carried the picture home and hung it on the wall. Over time, my wife grows to love the painting and finds herself scouring flea markets in search of other Yoresh paintings, which turn out to be equally caricaturish depictions of strange wedding scenes. She becomes obsessed with finding lithographs and paintings by this artist and slowly populates the walls of our small apartment with her Yoresh collection. (This is the part where I should mention that she removes all of my framed posters from movies I directed and artwork inherited from various family members.)

By 2018, we have a freaking Avigail Yoresh museum in our apartment. A veritable shrine to this reclusive artist (who, upon a quick Google search, is still alive and working in Israel, albeit an octogenarian).

Congratulations, you’ve made it to the middle, Almost done. folks.

2019. Just before COVID. I got the idea to track down the artist and ask her what the relationship is between the groom and the two women in the original framed picture I found (now hung at the center of the collection). My wife makes a few phone calls and manages to track down the artist herself. God bless the internet and our lack of privacy. Turns out she lives in some village which my wife mistakenly thought was near Netanya (a 20-minute drive on a Saturday) but which is actually near the Lebanese border. Her home is also a museum of her work, so one can (by appointment) take a tour. We scheduled it for a Saturday, stocked up on wine as gifts, dropped the kids off with the mother-in-law and took a road trip up north. I thought it would be a good idea to make a documentary about the whole affair with the theme being what is the relation of the two women to the groom in the original picture. That’s kind of my art: making videos.

Almost done with the middle. Stick with it. It gets better. Nope, that’s a lie. But keep reading if you wish.

We’re greeted by the artist herself and her husband, a pillar in the art/animation community of Israel and a founder of one of Israel’s leading animation departments. We are received generously in their beautiful home overlooking the mountains, and given an intimate tour of the amazing collection she has amassed over the years, which includes sculptures, miniatures, and, of course, her specialty, surreal marriage scenes. We tour her humble studio and listen to her as she recaps her artistic influences. I sat her down for an interview and asked her the question we’re all dying to know: which one is the bride and which one is the mother-in-law in the framed lithograph we found on Ahad Ha’am street in 2016?

She smiles and says they’re both in love with him and he has to choose one. So turns out we were both wrong. They treated us to homemade cakes, tea and even gave us booklets and postcards of her work. “Not many people come by anymore,” she says, quite gleefully. She was popular in the 1970s and her current fans are all either dead or on their way. We were the youngest ones to have shown up. And she is quite reclusive.

I’m no Ken Burns, Errol Morris or even DA Pennebaker, but I thought I had made a short little thought-provoking documentary about the whole saga, including interviews with the artist. I sent her a rough cut and after prolonged radio silence, she insisted, in no uncertain terms, that I NEVER show anyone this video. EVER.

Why? Who knows. But my wife sides with her (as is to be expected) and reminds me that she’s reclusive and there’s a reason she doesn’t want this seen that has nothing to do with me, my abilities as an artist or the quality of the documentary.

That was the middle. Let’s jump back to the end. 2021. The abandoned apartment and that framed picture of a marriage procession hanging unscathed in a house that looks like it’s in Aleppo, Syria, and had just been hit by a cruise missile.

What are the odds?

We now live in a shrine to this artist, who (and maybe it’s my own insecurities as someone who tries to create art in various forms) thinks my work is subpar yet her works keep ending up in trash cans and in abandoned buildings. Needless to say, it’s doing wonders for my self-esteem and my sense of impostor syndrome…

Moral of the story; if you see a piece of art in the trash just freakin’ leave it there.

Or something more profound, I don’t know. I’m not an artist.

Note for non-Hebrew speakers, the word yoresh translates to heir. The couple referred to themselves as The Yoreshim, i.e., The Heirs.

Also, for legal purposes, this is all fiction. We never trespassed anywhere. Please, I don’t want to go back to jail…