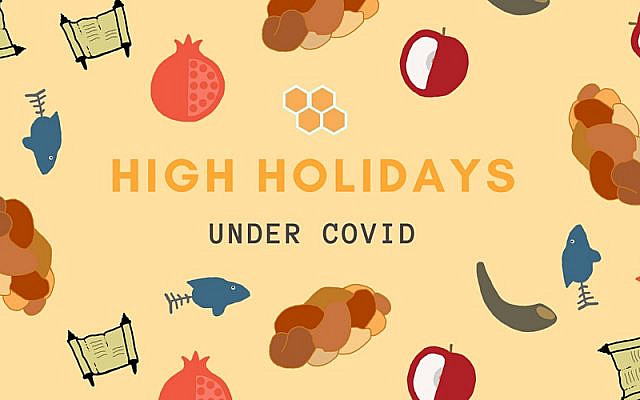 As the New Year of 5781 is approaching, I am reflecting on the past and beginning to think about the year to come.

I believe it goes without saying that 5780, or certainly the last six months of, were unlike any we had ever seen before. For many of us, myself included, much of 5780 was filled with fear, cancellations, disappointments, frustrations, loss and sadness. And despite this, I find myself constantly smiling at the incredible silver linings that worked their way into my life in the midst of what was going on. I had much more quality time with family, read double the amount of books I had in the previous months, explored and fell in love with new places close to home, learned to bake challah and so much more.

When we first went into quarantine in March, I thought a lot about those in hiding during the Holocaust, and gained strength from knowing that what we were going through was not nearly as bad as back then and hence my blog posts flowed easily. Yet as the months continued and we were outside more and learning to live with our new normal, somehow those blogs just didn’t come as naturally.

But now we are at a new juncture in the current pandemic, and in many ways we are beginning anew. A new season, a new school year, slowly going back to our offices and our lives, and a new Jewish Year.  Instead of pausing or winding everything down like last spring, we are now starting out in a way we never imagined possible last March. As Rosh Hashanah and Yom Kippur are now upon us, and for the most part we are still distanced, those parallels, and even more the strength to continue on this new and different journey, are coming back to me.

The High Holidays under Nazi occupation – whether in the early days of Nazi rule, in ghettos, camps, or in hiding – were not observed the way they had been. They were not spent with family and friends or in the grand synagogues of the cities of Europe or in the small shtetl villages that dotted the country sides. Although these times were filled with incomprehensible terror, they were filled with all the things that many of us felt in the early months of the pandemic – fear, cancellations, disappointments, frustrations, loss and sadness.

However, I also know that there were secret services taking place, using prayer books hastily written from memory on scraps of stolen papers from Nazi guards, minyans of 10 men gathered in corners under the darkness of night to recite Kol Nidre, woman lighting a small fire from hay and one lone match to begin the New Year and even though they were starving at all times, Concentration Camp inmates that refrained from eating even their minuscule portions during the Day of Atonement. Every bit of defiance that was left during the Holocaust was used to continue to follow Jewish law and tradition; because that was the only way Jews could continue to practice Judaism.

Back in the spring when we were first set to celebrate Passover under quarantine, it was certainly strange and different; it felt so off to many of us. But I was quickly reminded that celebrating holidays and practicing Judaism was not the same during the COVID-19 pandemic as it was during the Holocaust.  Unlike 80 years ago, nothing, no one, was stopping us from being Jewish.  Yes seder tables weren’t as large, temples weren’t crowded, and there were no large weddings and bar/bat mitzvahs.  But were were still able to practice our religion.

For sure, we are approaching this New Year differently, and that means we are still feeling afraid, disappointed and frustrated. But things have changed since the early days of the pandemic. We know to wear masks, and how to be more careful and cautious but still see others. We have places that are open, or at least partially open and we are able to gather in relatively safety.

So as we enter the New Year, instead of focusing on the disappointments and losses of the past six months, let’s think about silver linings.  Let’s think about all we did, and had the freedom to do, and the fact we see a light at the end of the tunnel.