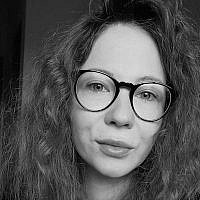 The Blogs
Galina Lochekhina - Mikulinser
Apply for a Blog
Advertisement
Please note that the posts on The Blogs are contributed by third parties. The opinions, facts and any media content in them are presented solely by the authors, and neither The Times of Israel nor its partners assume any responsibility for them. Please contact us in case of abuse. In case of abuse,
Report this post.

Speaking with people about their relationship to the Holocaust in their families is not a simple matter. Whether a survivor, a child, or a grandchild, all have their views and beliefs regarding the effects of the family’s gruesome past in their lives and how it has shaped their identities. For some, a positive outlook on life and resilient response to the difficulties and horrors has prevailed; resilience became the legacy most visible in their upbringings, emphasizing the blessing of living and viewing life as half-full rather than half-empty. For others, the silence around the monstrous events became the mechanism through which life could continue. Frequently, a double wall of silence emerged, whereby survivors did not tell and the offspring did not ask. This is not to suggest that the Holocaust was not present in these families, but only that it could not always be directly addressed. Instead, this inner unresolved grief would express itself in a wide range of emotional responses, including depression, anger, and abuse, but also overprotection, fear, or numbness.

Already by the 1960s, survivors who had lived through the Holocaust and who emerged in clinical research coined the term survivor syndrome or concentration camp syndrome to describe the multidimensional consequences they observed among some of the Holocaust victims. This syndrome comprises a combination of a chronic sense of anxiety, depression, and recurring nightmares, as well as feelings of guilt, emotional disruption, and cognitive disturbances, especially regarding memory and concentration. As William G. Niederland, a German–American psychoanalyst and himself a refugee from Nazi Germany, wrote after several decades of working with camp survivors: “psychological and physical trauma of a person brutally persecuted, incarcerated, and tortured rarely heal.”  A decade later, in 1981, a psychoanalysis researcher named Ilse Grubrich-Simitis pointed out that “physical survival was no guarantee for psychic survival.” A large body of later research supports these earlier findings and shows intense feelings of sadness, helplessness, and rage, alongside feelings of survival guilt among the survivors, decades after the war. However, more recent research tends to emphasize the adaptive strengths of Holocaust survivors, rather than their psychological distress. According to such studies, the Holocaust survivors who are alive today are likely the most resilient of the resilient, having lived long and full lives.

There is no clear agreement among scholars whether the echoes of the Holocaust reach the children of the survivors. Some research proposes that these children appear to be depressed, withdrawn, and exhibit difficulty in establishing and maintaining interpersonal relationships. Others, on the other hand, do not confirm such conclusions and strongly oppose any generalizations. Out of them all, I tend to agree with the words of literary scholar Efraim Sicher, who described the transgenerational transmission of trauma as “the scar without the wound.” He points out that it is not necessarily the wound that is transmitted, but a mark of that wound- a signifier of the not-lived experience.

Similar to the research literature on the second generation, there is no consensus among the academics with respect to the grandchildren of the Holocaust survivors. Yet, recent research concluded that the third generation has a greater opportunity to achieve “psychological freedom,” especially regarding breaking down the “double wall” of silence between the generation of survivors and their children. In doing so, the grandchildren are able to conduct a dialogue that could otherwise have been “blocked” in the family for many years, opening up a discussion about the Holocaust in their daily lives.

As I am now releasing a podcast about everything described above, I have had the time to reflect on how many different echoes of the war exist. Here, it is important to note that we are dealing with human beings and their lives. Therefore, no generalizations of survival experience and subsequent reactions should be made. Every story has its unique features since we act and react to the event in different manners. My aim was never to judge whose reaction was the most appropriate one, nor was it to emphasize which narrative is the incontrovertible truth. Such conclusions I leave for others to decide, whether they be listeners of the podcast or the interviewees themselves. Instead, I aimed to embody the conflicting discourse and deliver it to a diverse audience for a deep and comprehensive experience. I truly hope that each post of mine will make every reader closer to this goal.

To tune in to the conversation about Holocaust echoes and reflect with me, I invite whoever shares my curiosity to listen to the podcast, which will be released on the International Holocaust Remembrance Day- January 27th, 2022. On all digital platforms.

About the Author
Galina Lochekhina-Mikulinser is an emerging scholar and social activist in the field of Jewish Heritage. She is a graduate of the Weiss-Livnat International Program in Holocaust Studies at the University of Haifa and a founder of the podcast "The Holocaust: Three Generations".
Related Topics
Related Posts
Comments