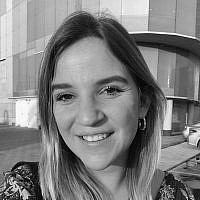 The Blogs
Nicole Bery
Apply for a Blog
Advertisement
Please note that the posts on The Blogs are contributed by third parties. The opinions, facts and any media content in them are presented solely by the authors, and neither The Times of Israel nor its partners assume any responsibility for them. Please contact us in case of abuse. In case of abuse,
Report this post.

It’s been little over a year since operation “Guardian of the Walls”, where terror group Hamas and the Palestinian Islamc Jihad (PIJ) fired thousands of rockets at Israel in the course of 12 days. For the first time in years, rockets reached the city were I lived, Herzliya, just north of Tel Aviv. As a new immigrant, that operation marked my first time hearing a siren, sitting in a shelter, crying and praying that the Iron Dome would do its work. I spent twelve days in anguish, knowing how lucky I was that it was only my first time experiencing anything like this, when the reality is completely different for Israeli citizens in the South living near the Gaza strip. Throughout the year, the sound of an ambulance or police car would still make my heart beat faster, and any news of unrest in Gaza sent my mind on a spiral of bad thoughts and worst case scenarios.

This is why I wasn’t thrilled when, standing outside of Yael’s building last Friday, I saw a Facebook post of a woman in Tel Aviv warning others about possible sirens that night. I quickly started browsing through the news and quickly learned that the IDF had launched operation “Breaking Dawn” against the PIJ. “Not again” was my first thought. Not the sirens, not the shelters, not the sleepless nights of being too scared to close my eyes and miss the red alert, not the fear, not the army massively calling reservists including many of my friends and loved ones, not the senseless loss of life, not the misleading news in the media, not the absurd comments from celebrities who have no idea what is really taking place here, not again…

I then wondered if it was okay to visit Yael at all. I had already made it to her place, but all I wanted to do was turn around and go back to my home in Tel Aviv. Still, I decided it was important to visit her, and went upstairs.

From the outside of her apartment I could hear the overwhelming sound of the army generals discussing the situation, the loud sirens, and the screams and explosions.

Now, there are a few things you should know about Yael. First, she is a Holocaust survivor. Born in Germany in 1936, her and her family escaped from the Nazi threat in 1938 to China, fearful for their lives. There, she spent her childhood and early teenage year in a refugee camp, including many years in dire conditions under Japanese occupation. Then, in 1949, a boat from the Jewish Agency brought her and her family, along the other Jewish survivors, to newly independent Israel. Since, Yael has created a beautiful family and life for herself in Israel. Besides being a proud Israeli Zionist, she is my Israeli grandma, and my good friend.

Secondly, Yaeli loves to watch TV, and she takes this hobby very seriously, watching at the maximum volume and never missing a second of footage. Her TV is usually showing the news, and she always says to me that this is her way of staying informed and connected to the outside world. This has been vital for her as the pandemic forced her into isolation throughout the last few years.

As soon as I came into Yael’s apartment I was overwhelmed by the images and sounds coming from her TV. Yael herself was glued to it and could not stop watching. I could feel my anxiety increasing by second after second. “Yaeli”, I asked timidly, “can we turn the TV off? It’s making me a little bit nervous.”

Yael looked at me in disbelief. “You don’t want to look at your army?” she asked. “Look at us! Look how strong we are! Look how brave we are! Look at this- we are targeting all the terror infrastructure! Look how precise we are!” Before I could even start trying to explain that, of course, I am very proud of our army’s work, she continued “did you know that the IDF goes above and beyond to minimize civilian casualties? This, while the PIJ uses human shields and blends civilian and military infrastructure and launches rockets indiscriminately towards us. Can you believe it? Look how great we are!”

Something clicked. Of course, I know all of this. I am aware of the purpose of the operation, the IDF’s values, the extents towards which they go to achieve their military objectives and defend Israeli citizens, while also aiming to minimize casualties in the Gaza strip. I have always been a passionate advocate of Israel and I proudly completed a three year long army service myself. “I know Yaeli” I said to her, but it really did feel different to hear it from her. This was coming from Yael, who had to escape her country of birth because she risked death for no other reason than being Jewish, who spent her entire childhood as a refugee in China… These distant memories stood in contrast with Yael today, sitting comfortably in her living room, watching the IDF on television with pride in her eyes, cheering like the biggest cheerleader ever, from the comfort of her sofa in her bright Herzliya apartment.

This is the real meaning of “never again”, a strong army that defends Israel’s right to exist and its citizens’ right to live in peace.

I smiled and sat next to Yael. We watched the news together for an hour or so. With Yael by my side I watched, listened, and I felt calm and brave and proud and safe, all at the same time.

If these days have been difficult for me, I cannot imagine how they must feel for those caring for others, for the citizens of Southern Israel, and the soldiers and reservists on duty risking their lives to defend us. Thinking of Yael has really helped me, so I wanted to tell everyone else who is going through a hard time, that there is a sweet Holocaust survivor in Herzliya proudly cheering for you.

About the Author
Nicole Bery is a 26 year old Ecuadorian living in Israel. She was recently released from the army after a three year long service as a lone soldier. She has a degree in Government, Diplomacy and Strategy from Reichman University and will soon complete an MA in Developing Countries from Tel Aviv University.
Related Topics
Related Posts