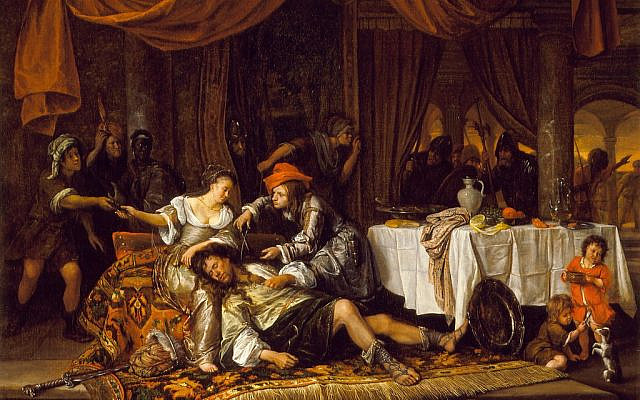 My husband is no Samson, but I have been tempted to play Delilah. His luscious lockdown locks are the envy of London’s Golders Green. Bald men are unashamedly envious and the b’sheitled women swoon – they would give anything for some of his hair to be sewn into their high-end wigs. Personally, I can’t stand it any longer.

It’s been more than a 100 days since a barber has gone near his scalp, yet that’s about to change this weekend as the UK government lifts the restrictions on many public places – most notably barbers and synagogues. I suspect there will be more people praying at the barber than in their local shul, where cumbersome, albeit necessary, plans for re-entry make the intricacies of animal sacrifice look like a picnic.

While those Gazan pillars that Samson destroyed may no longer exist, archaeological proof of Samson’s ripping good looks and Delilah’s come-hither lure was indisputably evident in Cecil B. DeMille’s 1949 Academy award winning movie, Samson and Delilah. Thankfully Hollywood has supplied the Jewish education so lacking across the Jewish world – every youngster knows the story of Jacob’s 12 sons and the fate of Joseph and his Technicolor Dreamcoat. We have an accurate understanding of the fundamental principles of The Ten Commandments and the miracles of Exodus, to speak nothing of the Life of Brian.

Delilah is just another in a long line of temptresses sent to change the course of history. Readers old enough to recall the dulcet tones of Welsh singer Tom Jones, will recall his signature song Delilah and its famous refrain, My, My, My Delilah/Why, Why Why Delilah. In the song, the anonymous aggrieved man realizes that ‘his woman’ Delilah is seeing another man. Distressed by her betrayal, he stabs her to death:

At break of day when that man drove away I was waiting/ I crossed the street to her house and she opened the door/She stood there laughing/I felt the knife in my hand and she laughed no more.

Welsh rugby fans have sung Delilah as their game’s unofficial anthem since the 1970s, but for the last few years, there have been moves to stop this. In 2014, one politician suggested the song “trivialise[s] the idea of murdering a woman,” and in 2016, another politician requested that the song not be sung as the lyrics glorify violence towards women, citing an increase in the number of domestic violence incidents when there are big rugby matches. Just a couple of weeks ago, the issue was raised again against the backdrop of Black Lives Matter advocates arguing that English rugby fans should stop singing ‘Swing Low, Sweet Charity’ due to its association with slavery.  As Welsh journalist Wyre Davies posted on Twitter: “If England rugby fans should drop ‘Swing Low,’  shouldn’t Wales do likewise with “Delilah” (“a song that trivialises the idea of murdering a woman”)?”

Whatever one’s position on singing Delilah, the issue of domestic violence is firmly in the public domain, particularly in recent months as lockdown has exposed and exacerbated the vulnerability of women and children who have been unable to leave their homes. UN Women recently launched the Shadow Pandemic public awareness campaign, focusing on the global increase in domestic violence amid the COVID-19 health crisis. There have been rallies recently in Israel to highlight violence against women and Jewish Women’s Aid in the UK reports a 27% increase in demand for its services compared with the last 3 years. Just this week, they received news of a £250,00 grant over 5 years from London’s City Bridge Trust to help meet the increased pressures in the Jewish community.

Delilah may not have been a victim of domestic abuse, but she was pressured – albeit with a little bribery – by the Philistine lords to find the source of Samson’s strength. Eventually, Samson revealed that a razor had never touched his head, and should he be shaven, his strength will dissipate and he will be weak like any other man. Samson falls asleep and Delilah orders a servant  – not necessarily a trained barber – to cut his locks. It didn’t end well.

Perhaps the most famous Jewish barber is Charlie Chaplin’s unnamed Jewish barber in his 1940 film The Great Dictator. Drafted as a soldier during World War I, he saves the life of  Commander Schultz, but forgets everything. Twenty years later, still suffering from amnesia, he returns to his work as a barber in the ghetto, which is now governed by Commander Schultz. As invading troops capture the barber and are about to hang him, Schultz recognizes him and stops the hanging. Schultz reminds the barber of his war experiences, and slowly he regains his memory. Schultz and the barber are sent to a concentration camp, but manage to escape from the camp in stolen uniforms and the barber, mistaken for Hynkel/Hitler [you have to watch the movie…] is called to give a speech at a huge victory parade. The barber had never given a speech before but announces that he [as Hynkel] has had a change of heart.

“I’m sorry, but I don’t want to be an emperor. That’s not my business. I don’t want to rule or conquer anyone. I should like to help everyone if possible. Jew, Gentile, Black Man, White, we all want to help one another, human beings are like that …Greed has poisoned men’s souls, has barricaded the world with hate, has goose-stepped us into misery and bloodshed..Our knowledge has made us cynical, our cleverness hard and unkind. We think too much and feel too little. More than machinery, we need humanity. More than cleverness, we need kindness and gentleness. Without these qualities life will be violent, and all will be lost…

You, the people, have the power to make this life free and beautiful, to make this life a wonderful adventure. Then in the name of democracy, let us use that power, let us all unite! Let us fight for a new world, a decent world that will give men a chance to work, that will give youth a future, and old age a security. By the promise of these things, brutes have risen to power. But they lie! They do not fulfill that promise! They never will! Dictators free themselves, but they enslave the people! Now let us fight to fulfill that promise! Let us fight to free the world, to do away with national barriers, to do away with greed, with hate and intolerance. Let us fight for a world of reason, a world where science and progress will lead to all men’s happiness.”

My father, a man of few words, gave his barber succinct instructions.

‘Mr. Berkovic, how would you like your hair cut?’ asked the barber.

‘In silence,’ my father replied.

Silence may be golden, but sometimes, it is the words of the barber that are the only ones worth listening to.