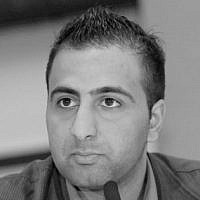 The Blogs
Kasim Hafeez
Apply for a Blog
Advertisement
Please note that the posts on The Blogs are contributed by third parties. The opinions, facts and any media content in them are presented solely by the authors, and neither The Times of Israel nor its partners assume any responsibility for them. Please contact us in case of abuse. In case of abuse,
Report this post.

As Ferguson, Missouri felt the full impact of waves of unrest which began with the shooting of Michael Brown, and once again flared up when Darren Wilson, the police officer who fatally shot Brown, was not indicted, issues of race and justice sadly manifested themselves in the form of violence and looting in many US cities.

Another reprehensible outcome, which shocked even those of us accustomed to battling anti-Israel sentiment and anti-Semitism, was that many anti-Israel activists drew parallels between the situation in Ferguson and that in Gaza, and co-opted the tragedy, joining demonstrations to push their own agenda. Sadly, the opinion that it was all part of a shared struggle gained some traction and was also shared by an NFL player recently on social media.  I don’t expect that I must explain that there are absolutely no parallels between the two scenarios: Israel is not on trial, and it is especially not being put in the dock by people who seek its very destruction.  These events, which have now been reinforced with a second lack of indictment in the death of Eric Garner in New York, do expose the shameless hijacking of the tragedies and struggles of other people to demonize Israel by so-called pro-Palestinian groups.

This is not new: co-opting the struggles of others has long been a tactic to demonize Israel and perpetuate the victimhood of the groups who tack their cause to one completely unrelated.  From using the Holocaust, to the struggles of Native Americans, South African Apartheid, to the myth that the struggle of the Palestinian people mirrors that of the civil rights movement for African Americans, there is no historical trauma that has not been commandeered for propaganda purposes.

Even with claims that the Palestinian ‘struggle’ parallels the civil rights movement having been demolished by activists including Chlöe Valdry and Dumisani Washington, anti-Israel activists have been unceasing in their attempts to pursue the comparison and claim the struggles of African Americans in the United States as synonymous with their own.  We witnessed with the death of Nelson Mandela the hijacking of his memory to further the anti-Israel cause, as once again the suffering of generations of South Africans under the apartheid system was used by anti-Israel voices to claim brotherhood in oppression.  We should all be aghast at the blatant disregard for history, and for what is fact, as such groups persist in stealing the trauma and suffering of many, insulting the memories of thousands who perished, and using a false libel of apartheid against Israel to do so.

I do wonder about the selective outrage of these ‘activists’ wearing their keffiyahs and waving their modified Arab revolt flags (aka Palestinian flag), screaming that US police officers are all racists and that the US will have no peace until there is justice.  They assert that Palestine stands with Ferguson, for justice for all and essentially the African American Community, but are perplexingly mute on the issue of racism in Gaza and the wider Arab world.

Besides demonstrable systemic racism and the frequent oppression of those who belong to any minority group in Gaza, casual racism is endemic and not even acknowledged by those who perpetrate it.  In November 2013, Asma Al-Ghoul wrote for Al Monitor that “Hey, chocolate,” “Hey, cappuccino,” “Hey, Galaxy [brand of chocolate],” “Hey, brown one,” and “Hey, black one,” are jocular expressions used by some in Gaza when a man, woman or child of African descent passes by. Sometimes the racism is expressed nonverbally through looks. Gazans, however, seem unaware of this racism.”

The article goes on describe some of what the 10,000-strong African community deal with in Gaza.  It is almost certain that some well-meaning individuals blame Israel for this, because of course everything is Israel is blamed for much that happens in the Middle East, whether it is involved or not.  This is without even touching on how Hamas profit from the sale of African slaves, yet they apparently claim to stand with African Americans.  The absence of any condemnation of such bigotry from those activists who are uniting the causes of Gaza and Ferguson rings as loud as any bell.

In the wider Arab world, the rampant racism that exists towards non-Arabs is shocking; indeed, from my own experience in Saudi Arabia, seeing Saudis referring to dark-skinned individuals as Abd (Slave or Servant) was sickening.  The broader world seems uncomfortable talking about prejudice that exists in the Muslim world, perpetrated by Muslims against those whom they deem as inferior.  If we are reminded of the 1930s European attitude towards Jews, it is no small surprise.

Those who stand up for the human rights for Palestinians, as such groups so vehemently insist they do, somehow find time to demonize Israel and stand in protest at events in the US, and yet remain stunningly silent on honour killings of Palestinian women.  Is it that the human rights of women do not matter?  Or is it that they are interested only in protesting something for which they can blame Israel?

Al Jazeera and the Washington Post, among others, reported in March 2014 that the number of reported honour killings in the West Bank had doubled to 26.  More than two women every single month were murdered by family or friends in the name of “honour,” yet the so-called protectors of Palestinian human rights on campus and beyond stand mute. A Palestinian murdered in the name of honour by another Palestinian doesn’t elicit calls for justice in their world view.

About the Author
Kasim Hafeez is of British Pakistani Muslim heritage. Growing up he was frequently exposed to Anti-Semitic ideas and developed a hatred of Israel and Jews. By the time he reached University he has embraced radical Islam and was active in campaigning for boycotts of Israel and it’s ultimate destruction. Only after coming across a book that led him to revaluate his beliefs on Israel, he decided to travel to the region to see the situation for himself. That trip changed his life, seeing a reality so far from the hatred and poison he had preached, he felt and obligation to stand up for Israel, as it was the moral and right thing to do. A human rights activist and self proclaimed Zionist, Kasim has spoken at campuses all over the world telling his story and standing up for Israel. He is a fellow of the lawyer project and as of 2014, he took up a position with B’nai Brith Canada
Related Topics
Related Posts
Comments