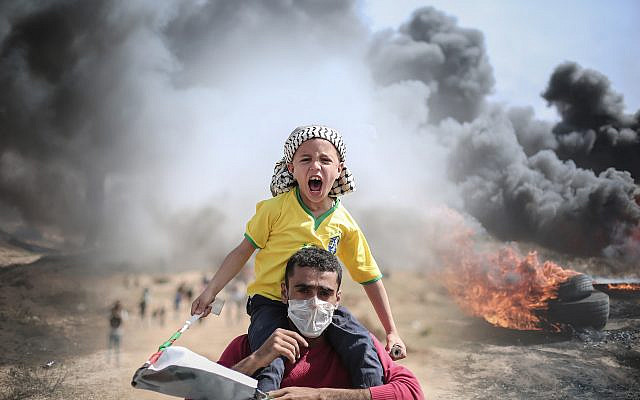 The International Criminal Court (ICC) is moving forward with investigating Israel for “war crimes,” and this is the latest salvo from the Palestinians in their century-long war with Israel.

After the Balfour Declaration of 1917 that voiced support for a Jewish homeland in Palestine, the Arabs throughout the 1920s rioted and brutally killed many Jews that had immigrated to the country fleeing persecution from Europe and Russia. The Arab fedayeen (“those who sacrifice themselves”) terrorized and killed Jews in Jerusalem,  Jaffa, and other Jewish cities and finally, in 1929, the Arabs savagely slaughtered the Jewish community in Hebron.

In 1936-39, the Arabs rose up again and violently revolted, inspired by the fanatical Jew-hatred of the Palestinian Mufti, Amin al-Husseini (who conspired with Hitler) and employed both economic strikes and a violent uprising to try and force the British to restrict both Jewish immigration as well as cease land sales to the Jews.  Again, upwards of hundreds of Jews were killed in the violence.

Upon the United Nations resolution for the partition of Palestine with sections for both the Jews and Palestinians, the Jews accepted the recommendation, while the Palestinians rejected it and proceeded to conduct a full-fledged civil war in 1947-48, including a devastating siege of the hundred thousand Jews living in and around Jerusalem. The Arabs proceeded to murder and plunder the Jewish areas of Palestine resulting in hundreds of more Jewish deaths.

In 1948, with the expiration of the British Mandate and the withdrawal of the British forces from Palestine, and in alignment with the United Nations’ Resolution 181, David Ben-Gurion declared the State of Israel, upon which the surrounding Arab nations, including Egypt, Syria, Jordan, Lebanon, and Iraq, invaded in overwhelming number and force, attacking the Jewish settlements. Literally, 1% of the Jewish population was murdered, including many recent survivors of the Holocaust who stood to defend the fledgling new nation. Unfortunately, this was only the first of many subsequent Arab Wars against Israel that occurred in 1956, 1967, 1973, and 1982. This ongoing belligerency and nation-state war was underscored by the Arab League commitment in Khartoum in 1967 to “The Three No’s”: no peace with Israel, no recognition of Israel, and no negotiation with Israel; and their only “yes” was for relentless war with Israel!

When open warfare on the battlefield did not yield the desired results for the Palestinians and Arab League state benefactors, they instead turned to terrorism wherever and whenever they could strike to the most devastating effect, including oftentimes at civilian men, women, and children. In 1964, the Palestinian Liberation Organization (PLO) was founded with the aim of the complete “liberation of Palestine” through violent struggle. Many other offshoot terrorist groups (PFLP, DFLP, Abu Nidal, Al Aqsa Martyrs Brigade, Palestinian Islamic Jihad, Hamas, etc.), similarly conducted open attacks on Israeli civilians around the world murdering them in buses, pizzerias, discotheques, markets, airlines, even the Olympics, and more. No venue was off-limits for suicide/homicide bombers, shooters, and knife and vehicular attackers. These terror attacks eventually escalated to Qassam rockets, missiles, terror tunnels and abductions of Israelis. These terror attacks continued unabated until Israel began building a separation barrier from the Palestinians in 2002, which has reduced the devastation to the Israeli civilian population.

The First Intifada (a concentrated and prolonged uprising) was in 1987-1993 and was followed by the Second Intifada in 2000-2005. Despite the Peace Treaties being achieved more broadly by Israel with Egypt in 1979 as well as with Jordan in 1994, these prolonged series of Palestinian protests and violent outbursts emerged and continued for years, and are well-known and recognized by images of Palestinians throwing stones and Molotov cocktails, burning tires, and conducting violent attacks. The uprisings were generally-speaking the result of frustration of the Palestinians relegated for decades as political pawns by their Arab brethren to refugee camps and yet failing to achieve their aims for the liberation of Palestine through war, terror, and the failed negotiating strategy of their leaders, like Yasser Arafat, who passed over both the possibilities of the Oslo Accords in 1993 and 1995 that provided for Palestinian autonomy and self-determination, as well as the 2000 Camp David Summit in which virtually all the West Bank and Gaza (with some swaps for land for that which would be retained for Israel’s security) and much of East Jerusalem was offered to and rejected by them. Thousands of Israeli were killed and wounded in these violent uprisings.

Already since 1945, the Arab League conducted economic warfare against the Jews in Palestine and boycotted the Yishuv, and later they forbade state-to-state relations with Israel and business activities with Israelis. After the Arab-Israeli War of 1973, the Arab Organization of Petroleum Exporting Countries (OPEC) extended their economic warfare to the United States, which supported Israel in the Yom Kippur War, and the Arabs imposed a punishing oil embargo on the U.S. Since 2005, this economic violence has been extended to a broader Boycott, Divestment, and Sanction (BDS) movement that seeks to get nations and people around the world to economically hurt Israel and force them to cede to the Palestinians irrational quest for absolutely all of Palestine: “from the river to the sea!”

The Arab League has also brought the fight against Israel to the political arena pushing more United Nations(UN) resolutions against Israel than against all other countries in the world combined, including in 2020 when the morally corrupt UN issued 17 more resolutions against Israel, three times more than the rest of the world, even as Israel made peace with four Arab nations (UAE, Bahrain, Sudan, and Morocco) the same year in the Abraham Accords and other normalization agreements (this on top of their prior peace agreements with Egypt and Jordan that now spans decades). Never-the-less, Israel, a tiny democracy in the Middle East, is more condemned than the hosts of brutal dictatorships and murderous and repressive regimes throughout the world together.

In 2015, Palestinian Authority President, Mahmoud Abbas requested the International Criminal Court (ICC) to do a ludicrous investigation of Israel for “war crimes” since 2014 for activities in the Gaza Strip as well as settlement building in the West Bank. Israeli unilaterally withdrew from Gaza in 2005 giving the Palestinians their autonomy, and it was soon taken over officially by a terrorist organization, Hamas in 2007.  They proceeded to attack Israel with rockets, missiles, and terror tunnels into Israel’s sovereign territory and even attacking and abducting its citizen including famous, Gilad Shalit in 2006 who was held in captivity for five years. In 2014, after years of maximum restraint, Israel launched Operation Protective Edge against Hamas. Additionally, Israel which won the West Bank from its Jordanian occupiers in the 1967 War of self-defense, has built settlements on the land that is deemed vital to its security. Overall, the Israel Defense Forces, anchored in a historical policy of self-restraint (“havlagah”) and safeguarding human life, has an impressive reputation as the most moral army in the entire world!

Israel has throughout its history striven for peace and reconciliation with its Palestinian and Arab neighbors. From the acceptance of the United Nation recommendation for the partition to the Oslo Accords and the Camp David Summit working toward Palestinian autonomy and self-determination, and even making painful concessions at the time for the possibility of a two-state solution that would also let Israel live in peace and security.  Furthermore, Israel uprooted Jewish settlements and citizens, unilaterally withdrawing from Gaza and going so far as to give back the entire, hard-won Sinai in order to attain peace with neighboring Egypt. Israelis value peace and human life so much so that they have routinely in their history exchanged hundreds or even thousands of Arab prisoners for just one or a few Israelis. For example, in 2011, Israel exchanged more than 1,000 Palestinian prisoners, including hundreds with “blood on their hands” serving life sentences for one courageous Israeli soldier, Gilad Shalit, held prisoner by Hamas terrorists.

Yet through never-ending Palestinian rejection of one peace proposal after another, and instead choosing to have “all or nothing” of Palestine, the Palestinians have embraced armed and violent struggle as well as economic, political, and judicial warfare against Israel. Unfortunately, the Jewish people will need to continue in their ultimate struggle for survival. After 2,000 years of Jewish exile, and suffering under incessant persecution, inquisitions, expulsions, pogroms, the Holocaust, even now with the State of Israel, the one Jewish homeland and our refuge, the attacks continue against us from Palestinians choosing to wage an endless, bitter war instead of looking to make a lasting, beautiful peace.