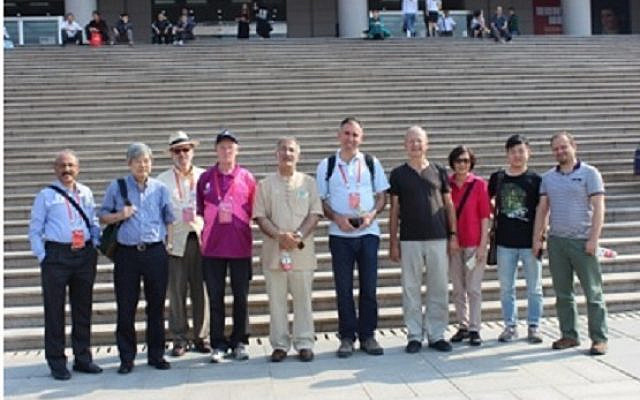 The scientists who were invited for this conference can been seen above (Photo credit: D Chandrasekharam)

“China Eyes One Belt One Road Initiative to Expand Renewable Energy” was the news item in clean energy news and insights by MERCOM India. This is basically the revival of the Silk Route by China to rope in all the countries along this route for economic benefit. The genesis of this initiative was IWTOMA. The conference invites reads like”

“We cordially invite you to be our guest of honor at the 2nd International Workshop on Tethyan Orogenesis and Metallogeny in Asia (IWTOMA), which is scheduled from 16 to 18 October 2015, at China University of Geosciences (CUG), Wuhan, China” read the invitation. This workshop is co-sponsored by the National Natural Science Foundation of China, the State Key Laboratory of Geological Processes and Mineral Resources (Wuhan), and the State KeyLaboratory of Continental Tectonics and Dynamics (Beijing). This workshop aims to discuss and exchange the latest information on tectonic evolution, metallogeny, petroleum geology, water resources, and geological hazards in Asia”. Scientists from the ten countries located along this Silk Route were invited for a brainstorming workshop. Each country was represented by scientists working on natural resources. Of course the USA too was a part of this conference represented by a Geophysicist from USGS. How China beautifully coined this conference to gather ideas to implement this project. The project covers two parts. The “Silk Road Economic Belt” is mainly land-based and is expected to connect China with Central Asia, Eastern Europe, and Western Europe.

The main focus was on geothermal and mineral resources. India presented a road map (Infrastructural development along the Silk Route through Enhanced Geothermal Systems technology: Bridging the east and west through geothermal power. D Chandrasekharam and V Chandrasekhar: “Geothermal and Water Resources along the Silk Roads, IWTOMA, 16-18 October 2015, Wuhan, China”) to develop geothermal resources along the Himalayan geothermal belt (including EGS resources). This presentation drew attention from all the countries present at the workshop. The main focus of the presentation here is that the Himalayan geothermal belt has enormous potential to develop renewable energy (geothermal in particular here) and developing this source will support ancillary industries that need to be developed along this route. This idea was well received and within months The China University of Geosciences, Wuhan has established an institute “Silk route Institute” and focused on developing renewable energy resources. Now geothermal energy power plants are working at Yanbajing (old), and several others along the northern foothills of the Himalayas. The same idea was given to the Indian policymakers at that time but there were no takers from the Indian side!!! Who gained?

The entire project to revive the silk route by China has wider implications.  The entire Himalayan province extending from Nangaparbat to the Arunachal Pradesh ranges (including Nepal Himalayas)?  Is abundant with natural mineral resources;  both metallic and non-metallic and energy resources that include oil shales, oil, and geothermal.  The occurrence of these mineral resources have been documented since the British rule in India and I am sure China must have documented it much before it………maybe during the Qin dynasty by Ying Zheng.!!!!

The NW Himalayas, the Zanskar region has rich deposits of sapphires. Part of the resources land falls within the occupied Kashmir. The Nepal Himalayas is rich in beryllium in the granites. In 2016 China conducted fieldwork in the Nepal Himalayas and mapped all the sites that are rich in this precious mineral (aquamarine). This data has been published in a Chinese Journal. The granites of Nepal Himalayas are enriched in Nb, Ta (which belongs to the Rare Earth Element group that are very essential for making wind turbines), Li ( raw material for making Li-batteries), and B (borax abundantly used in the pharmacy industry)!! The shale deposits in Arunachal Pradesh (including Bhutan and Sikkim) are termed as Oil shale deposits that are the main source for Shale oil and shale gas. The entire Himalayan belt is a rich source of geothermal energy, extending from Yangbhajing above Arunachal Pradesh to Puga in Ladakh). Lhasa, the capital of Tibet gets its electricity from a geothermal power plant located in Yangbhajing (32 MWe) .  This is exactly the idea behind the workshop that was organized by China that was detailed in the earlier paragraphs. The countries that were invited to participate in the workshop include India, Pakistan, Iran, Italy, and Afghanistan. Of course our big brother, the USA has to be there in such a large project.

The main focus of the workshop described above was to compile information related to all the economic mineral deposits detailed above. This project needs infrastructural support in the form of energy. It has prepared a detailed project report to develop all the geothermal sites along the Himalayas to generate electricity to support the entire (silk route) road/rail infrastructure. Of course, all the Himalayan rivers originate from the upper Himalayas located on the Chinese side. Developing hydropower projects is part of the silk route project.