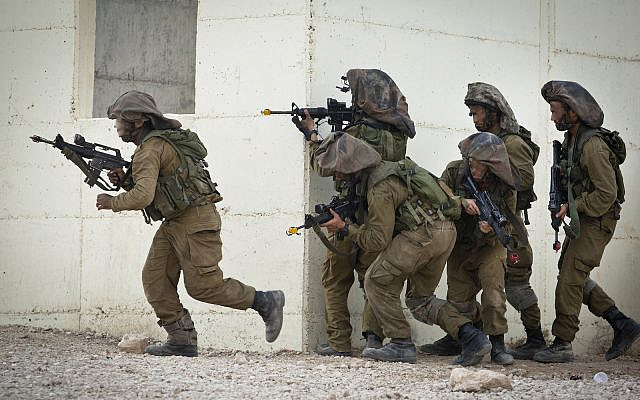 Illustrative: For the first time exposed to the camera; soldiers of the operational unit 8200 training in the field. Sep 11 2012. (Moshe Shai/Flash90)

When asked to list the greatest challenges facing the Israel Defense Forces, most would probably mention the prospect of a nuclear Iran. Others would refer to the latest wave of terror emanating from the Palestinian territories, or Hezbollah’s rockets aimed at Israel from Lebanon. While there is no minimizing these dangers, many in Israel’s national security community have come to the conclusion that the greatest challenge facing the IDF is not external, but internal. Specifically, deep changes in Israeli society are threatening the IDF’s model of service and future ability to defend the country.

We recently celebrated 74 years since the establishment of the IDF. There is no question that Israel’s military has been an incredible success story. Against overwhelming odds, it has won successive wars and created the most effective fighting force in the Middle East out of one of its smallest populations. It has also proven immensely successful as a melting pot, leveling Israeli society and serving as a powerful engine for social mobility, a meeting point for the various sectors of Israeli society, and a powerful platform for instilling the values of a Jewish and democratic state in its young men and women. There is also a case to be made that the IDF is responsible for the miracle of the Start-Up Nation.

Now, the model underlying the IDF’s success is in grave danger. In theory, Israel has mandatory service: every 18-year-old is supposed to serve. In practice, this is no longer the case. Today, largely as a result of the growth of the Arab Israeli and ultra-Orthodox communities, fewer than half of Israeli 18-year-olds serve in the “people’s army.” The Supreme Court has ruled time and again that the continuing exemption for ultra-Orthodox men is illegal and violates the principle of equality, but the deadlocked Knesset has failed to legislate a reasonable alternative.

Not surprisingly, young Israelis who do serve are growing increasingly frustrated with this state of affairs. Why should some 18-year-olds be required to risk their lives for their country while others are exempt from service?  In an age in which getting on with one’s career is seen as at least of equal importance to serving one’s country, a plurality of Israelis (47 percent) now support changing the current model of service. Among those under 44-years-old, over 50% now say they favor abandoning the “people’s army” founded on mandatory conscription and moving to an all-volunteer professional military.

The shift in Israeli public opinion coincides with a major transformation in warfare. The battlefield that I spent years training for as a young conscript in the 1990s is all but unrecognizable to today’s recruits. Modern warfare requires highly capable and technologically adept soldiers, trained over the course of several years. In some units basic training followed by a year or two of service still make sense, but in many others, it is wasteful to spend time and money training soldiers on complex weapon systems only to release them after three years.

So, what can be done?

One possibility is to shift to an all-volunteer force similar to the American system. This would release all Israelis from their current obligation, thereby eliminating the legal problems associated with the current situation.  If no one is forced to serve, exemptions for the Arabs and ultra-Orthodox will cease to matter.

Unfortunately, there is near consensus among experts that an all-volunteer military is not feasible for Israel. From purely a security perspective, Israel cannot afford to entirely relinquish its draft at this time. The threats are too great, and the number of eligible young Israelis is too few, to entrust the country’s security to a small professional fighting force. For Israel to remain secure in one of the world’s most dangerous regions, the IDF must be able to draw upon substantial numbers of the country’s most talented and motivated young men and women and benefit from a large body of trained reservists in wartime. This is only possible with mandatory conscription.

Another downside to doing away with a mandatory draft would be giving up on the important role that the IDF plays in fostering social solidarity and instilling an ethos of service to a higher cause than personal advancement.

Understanding that the current model is no longer feasible but that abandoning the draft entirely is too risky, experts at the Israel Democracy Institute have devised a proposal that is swiftly gaining acceptance among Israel’s decision-makers. The proposal shifts to a hybrid model that is a combination of both conscripted and professional. The goal would be to have the majority of draft-age men and women serve meaningfully for a shorter period of around two years, keep the best for another year or so with adequate compensation, and then retain a core group of well-paid outstanding professionals who will serve into their late 20s and 30s and form the backbone of the well-trained standing army needed to fight the wars of the 21st century. This model would guarantee that the IDF would continue to have the personnel it needs at a reasonable cost.

The IDF’s model of service is considered one of the “third rails” of Israeli politics, an emotional issue that touches on every Israeli’s identity, security, and individual well-being. This reality has made tackling this issue so difficult. The question of ultra-Orthodox military service in particular has even served as a major catalyst for the recurring political crises and repeated elections we have experienced over the past few years. While ideological zeal can cause all sides to dig in and refuse to compromise, continuing on this course will lead either to an erosion of the IDF’s fighting power or to ill-considered changes that might be forced on the IDF without the benefit of sound planning or careful consideration of Israel’s interests.

Israel has always thrived on its qualitative edge. At the end of the day, that edge is not about the machines of modern warfare but the people who operate them. To ensure that the IDF continues to keep Israel safe for many decades to come, we must have the courage to change its outdated model of service.