There comes a time in many immigrants’ lives that tests their will like never before.

A rite of passage that requires strength and perseverance, surrounding them in unfamiliar places with strange faces, making them question their very existence.

I’m talking about Ulpan, quite possibly the most important benefit a new immigrant could receive, excluding therapy. All olim chadashim (new immigrants) are granted five months of free, intensive Hebrew instruction by the Ministry of Absorption. Free health insurance is also available for five months because in order to get through Ulpan, you may need to take drugs.

As well as an experience shared by most olim, it might be the biggest determinant of future success. Those who work hard to master the language can reach the highest echelons of Israeli society. The other 98% should have a sense of humor.

In recent years, many private Ulpanim* have opened, offering smaller classes or a specialization in different subject matters. For the purpose of this article, we will be ignoring those (because they are higher quality and less fun to mock.)

*Ulpanim is the plural form. The need to use this word does not reflect positively on your absorption. For example, “I have flunked out of four Ulpanim and counting.”

Ulpan, Hebrew for “studio” or “instruction,” is a class or institute designed to teach adult immigrants the basic language skills of conversation, writing, and feeling like morons. Its primary purpose is to help integrate the students into Israeli society as quickly as possible, achieved by isolating students from Israeli society for prolonged periods of time.

How to Get Started?

Once you decide where to live, you’ll want to register for Ulpan. This guarantees that at least once in your lifetime, you’ll find yourself in an immersive Hebrew environment. The result of the placement test determines your kita (class). Students are placed either in an ongoing kita with availability, one that will begin “acharei hachagim” (after the High Holidays), or one that will begin after the student has given up and moved back.

Certain kibbutzim offer the option to study Hebrew in the mornings and work in the afternoons. Very few olim study in a kibbutz Ulpan due to the fact that they are located on kibbutzim.

The lowest level for beginners is Aleph, named for the first letter of the alphabet. (If you didn’t already know that, you can just skip the placement test.) The highest level is unknown, as no one has made it that far and lived. Some have claimed to have reached Kita Vav but much like Area 51 or the Loch Ness monster, these stories are usually dismissed. Also, these people have no friends.

Intermediate level classes are named for the corresponding letters of the Hebrew alphabet: Aleph, Aleph Plus, Aleph Plus Plus, and so forth. 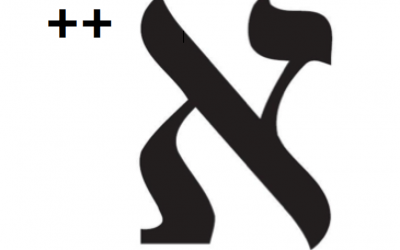 The third letter of the Hebrew alphabet

Each class is made up of people from all over the world, with entirely different proficiency levels. A single class could include both a student who can speak but not write, and one who can write but barely speak. (If we could combine these two people, we would actually have one fantastic Hebrew student.)

This unique configuration would result in sheer madness in a traditional classroom: a student who can add but not subtract, next to another who can do trigonometry but not square roots. Even if teachers existed who were able to find a common ground, they would submit their letters of resignation after the first day.

The first day of class is reminiscent of the high school social scene, but with the jocks, cheerleaders, band nerds, and dweebs replaced with Anglos, Russians, French, and non-Jewish women who met their hot Israeli boyfriends while traveling and forgot to look at a map before agreeing to get on a plane.

Any national differences are rendered moot as soon as the teacher begins to speak. All instruction is conducted in Hebrew and, as mandated by the Ministry of Education, must be done in a tone of voice typically reserved for conversations with 4-year-olds.

Not only does this slow pace help them keep up, famed Israeli psychologists Daniel Kahneman and Amos Tversky concluded that its soothing nature minimizes the possibility that a student will snap. 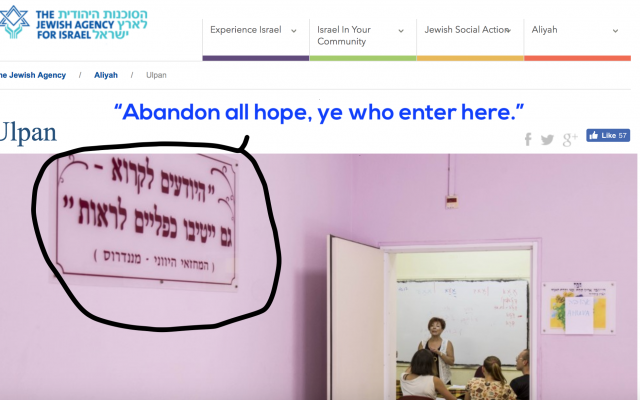 One: students retreat to their linguistic cliques, whispering and pooling their mental resources in order to determine its meaning in their native tongues; and two: a small minority of overly motivated students give the evil death stare to anyone who dares speak in a language other than Hebrew. The latter group will quickly become social outcasts.

Any good teacher keeps class interesting with a variety of activities. One option is a worksheet that has faded over generations of photocopying, each time being misaligned an additional 10 degrees. Another is partner work, during which you will be assigned an activity with someone who can’t tell the difference between the letter samech and a pool of vomit. If this does not sound familiar, you were the dumb one who helped torpedo your partner’s aliyah.

For many years, teachers distributed the newspaper Sha’ar L’Matchil (Gateway to the Beginner), a beginner’s newspaper which published articles no longer current by the time they reached the class. Though the paper was discontinued in 2012, you can still access the website  to learn about just one of the infinite texts that immigrants could not read.

To any prospective olim who weren’t too disturbed to read until the end, congratulations, you can only go up from here.

Despite the fact that when speaking Hebrew, I probably sound like Borat in English, I cannot blame any of the Ulpanim* I attended. My teachers were not only good instructors, but good people. While some Ulpanim are better than others, the #1 predictor of your Hebrew success is you and you only.

So do your homework, make flash cards, make Israeli friends, and most importantly, have fun!

And if not….well, make sure you get your free health insurance.