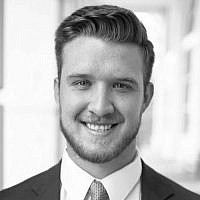 The Blogs
Noah Bradshaw
Apply for a Blog
Please note that the posts on The Blogs are contributed by third parties. The opinions, facts and any media content in them are presented solely by the authors, and neither The Times of Israel nor its partners assume any responsibility for them. Please contact us in case of abuse. In case of abuse,
Report this post.

“No Peace, No Recognition, No Negotiations”.

The famous 3 No’s from the 1967 Khartoum Resolution where the Arab states proudly declared their hatred and isolation towards Israel. However, Khartoum proved two key points; necessity breeds cooperation and time brings forth new realities.

The past few years have witnessed a dramatic shift with Israel’s relationship with its neighbors. Traditionally outside of 1979 and 1994 when Israel formally signed peace treaties with Egypt and Jordan little has been done to normalize relations and strive for peace between Israelis and Arabs. It is important to note that this is not out of Israeli design but that the Arab states have purposely set out to alienate, demonize, fail to recognize Israel’s permanence in the region. For decades the 3 No’s have largely stood strong; the little interactions focused around counter-terrorism or the military. However, times are changing and Israel is no longer being viewed as some temporary tumor that can be removed with enough radiation. Now, this does not mean that Israel and the Arabs are forging alliances and opening their borders. However, larger threats from Iran, Israel’s thriving economy, prolific R&D, stability, and western support have made it a desirable partner for Arab states looking to improve their lot in the region.

Recently two major events occurred that succinctly sum up the changing tide.The Trump peace plan “Deal of the Century” was recently put forth, although peace offers supported by Israel are not new. Going back from before 1948 the Jews have been willing to give land for peace in the region and routinely without fail the Arabs and Palestinians have rejected every offer given to them. As Abba Eben said, “The Palestinians never miss an opportunity to miss an opportunity”. Predictably, PA President Abbas has already rejected the offer before any formal negotiation process. However, this time around something changed, not with the Palestinians but with the Arab world. An Arab country does not have to proudly support the plan to show monumental change.

Historically focal opposition is the norm so silence, hesitant support, or full support are all significant and laudable achievements. Notably, Egypt, Saudi Arabia, the UAE, Bahrain, Oman, Qatar, and Morocco are all supporting the deal to various degrees. This is revolutionary and shows a massive shift in the Arab world. Their support for the Palestinians is still strong however it is apparent that regional peace is being viewed through a lens of working with Israel not working to destroy Israel.

The Gulf States have recently shown their own interest in improving relations as evident with the recent Bahrain economic forum that included Israelis, Palestinians, and Americans. That second notable event was the recent meeting between Israel’s Prime Minister Benjamin Netanyahu and the President of Sudan to discuss the normalization of relations between the two countries. In just over 50 years the country that hosted the resolution containing the 3 No’s is working towards peace with Israel; and only a week after the Trump Peace Plan release. While formally this meeting has not resulted in changes yet, the simple act of meeting and talking shows a mentality change in the Sudanese leadership. Arab countries are hopefully beginning to learn that they can continue their support for a Palestinian state while still recognizing Israel’s right to exist under safe and secure borders, as well as Israel’s potential in the region as a valuable partner. So far the critiques have been wrong, Israel hasn’t gone anywhere, peace plans and forums have not alienated Arab neighbors, and despite tensions in the region there is hope and a vision for a peaceful future.

About the Author
Noah Bradshaw is a senior CAMERA on Campus fellow at the University of Arkansas where he is studying political science, history, and Jewish studies.
Related Topics
Related Posts
Comments