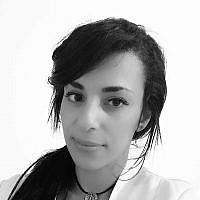 The Blogs
Sivan Gamliel
Apply for a Blog
Advertisement
Please note that the posts on The Blogs are contributed by third parties. The opinions, facts and any media content in them are presented solely by the authors, and neither The Times of Israel nor its partners assume any responsibility for them. Please contact us in case of abuse. In case of abuse,
Report this post. 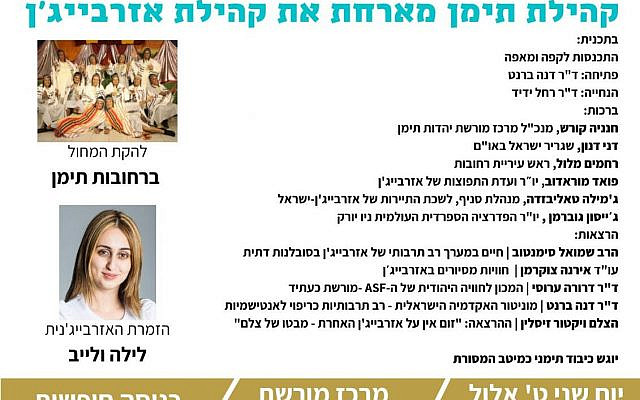 A number of years ago, I lived in the United States, where as an Israeli I was exposed to the idea of a melting pot, where a number of people from various ethnic groups lived together and coexisted with each other. However, this model was imperfect, as racism is a major part of American society, as all of the frequent shootings of African American people demonstrate.

Indeed, the idea of a melting pot is very different from multi-culturalism, as it takes many nations that live among each other and force them to be alike. As a result, people with darker skin and who are not Christian do not receive the same treatment that people with lighter skin that are Christian receive there. Therefore, there is great pressure on the Jewish community to assimilate and become something else. However, the flawed American model for a melting pot is not the only model out there.

Not too long ago, I was exposed through some contacts of mine to the Azerbaijani model of multi-culturalism, where the differences of the different nations that live among each other are embraced. The Republic of Azerbaijan, known as the “land of the Fire” since antiquity, is situated on the historic “Silk Road” connecting the Eastern World with Europe. Azerbaijan, with its capital city of Baku, is situated next to Georgia, Russia, Iran, Turkey and Armenia, and is on the Caspian Sea near Kazakhstan and Turkmenistan. Therefore, the Azerbaijani people are exposed to many different peoples, like in the United States.

However, the Azerbaijani people take pride in the differences among the various nations that live together. Over there, everyone celebrates Novruz, Passover and Easter in unison, and greets each other for their holidays. Since many years, both Azerbaijanis and foreign people see the religious leaders of Azerbaijan’s Muslim, Christian and Jewish communities coming in public together, speaking together in favor of tolerance and coexistence and against extremism of any kind – and show how they enjoy each other’s company. In parallel, Azerbaijan’s political leadership has come to progressively underline Azerbaijan’s secular system.

Apart from that, Azerbaijan was the first Muslim country to introduce theatre, opera, votes for women, and cinema. Nowadays, the government in Azerbaijan is one of the most secular in the region, leading to limiting extremism in a country whose geopolitical importance in the Caucasus region develops day-to-day.   Azerbaijan established a peaceful coexistence between representatives of all religions, in addition to national and ethnic minorities, and this model of tolerance should be spread in Europe and throughout the world.

In addition to Shia and Sunni Muslims, who make up the majority of the population, Jews, as well as followers of the Russian Orthodox Church, Albanian Christian church, Zoroastrianism, Baha’i and other religions are all citizens of Azerbaijan. Azerbaijan naturally rejects the extremist influence because it is perceived as a threat to the nation state. There are 14 churches in Azerbaijan, more than 2,253 mosques and 7 synagogues.

The Azerbaijani Constitution, like the constitutions of many other contemporary nations, declares that each religion is equal before the law (art. 18) and that everyone is guaranteed equality and respect for their rights and freedoms, regardless of their race, nationality, religion, language, or ethnic origin (art. 25). Everyone also has the freedom to practice any religion they choose, as well as the right to express their religious beliefs (art. 48).

Muslims: Azerbaijan’s population is mostly Shia Muslim. But its government is intensely secular. Shia represent eighty-five per cent of the Muslim population, Sunni Muslims is actually thirty-five per cent. The religious institutions in Azerbaijan have incorporated a firm policy to stop the influence of so-called “radical groups”. The mosques are not categorized as Sunni or Shia, rather, the mosques promote the name of God, and Sunnis and Shias pray together. Azerbaijan educates young Muslim clerics to promote Islamic morals on the basis of local traditions and cultural dimensions, which should in turn restrain the influence of foreign religious groups. The extremist groups also target Azerbaijan because of government policies that joined with Western policies.

The religious institutions in Azerbaijan have built a religious model that diminishes dissimilarities between Shia and Sunni. Azerbaijan may be the unique Muslim majority country in which the supporters of two sects pray together in the same mosque, and sometimes even behind the same Imam. Religious institutions in Azerbaijan have adopted a firm policy of establishing a religious model that decreases the differences between Shia and Sunni, so there are stable policies against missionaries from abroad and radical groups to maintain what is described as “a unique, peaceful coexistence” among the many religious groups.

Jews: The Azerbaijani Jewish community numbered between 7,800 and 16,000 as of 2009. The Jewish community of Azerbaijan comprises different subgroups, mainly Mountain Jews, Georgian Jews, and Ashkenazi Jews, as well as Kurdish Jews, Bukharian Jews, among others. The Mountain Jews of Azerbaijan are neither Sephardim nor Ashkenazim but rather trace their ancestry to the Jews of the Persian Empire. Israel and Azerbaijan have had diplomatic relations since April 1992, six months after the republic declared its independence from the Soviet Union.

The Museum of Mountain Jews opened in Azerbaijan in 2020 to shine a light on this one-of-a-kind community, their traditions and culture, keeping them safe for generations to come. The Museum of the History of Mountain Jews is unique in the world. It includes documents, religious items and artifacts. This museum is dedicated to the history and culture, past and present, of the Mountain Jews. It reflects an extraordinary degree of collaboration and reciprocal respect between Jewish and Azerbaijani people. Krasnaya Sloboda is believed to be the world’s only all-Jewish town outside Israel and the United States, with a population of around three and half thousand people.

Israel and the secular government of Azerbaijan share the same goal. For us Israelis to find a Muslim majority country which is so open, so friendly, so advanced, is not something the Israelis should take for granted. There is a total of five Jewish schools in Baku and Quba (including a day school) with a total enrollment of 1,450 students.

Christians: Azerbaijan is also motherland to almost 300.000 Christians, as well as several Christian communities of numerous denominations – Russian Orthodox, Georgian Orthodox, Albanian-Udin, Slavic Molokan, Roman Catholic, German Lutheran, Baptist, Pentecostal, Presbyterian, Adventist, Evangelical Churches, Non-Denominational and Charismatic churches, and others. Azerbaijan has earned local praises for its level of religious freedom, especially toward Christians and Jews. Pope Francis visited Baku in 2016, and Pope John Paul II in 2002. The stained-glass windows in St. Mary’s Church of the Immaculate Conception—crafted by Azeri artists—were financed by the Heydar Aliyev Foundation, managed by Azerbaijan’s first lady and vice president Mehriban Aliyeva. The church bells were donated during an official visit by the president of Poland. 5 churches belong to the Orthodox community. 4 churches belong to the Georgian Orthodox community, 1 church belongs to the Lutheran, 1 to the Catholic and 2 to the Alban-Udi religious community. The Heydar Aliyev Foundation of Azerbaijan, governed by First Vice-President of Azerbaijan, H.E. Mrs. Mehriban Aliyeva, is one of the main implementing agencies for the execution of noble projects to protect Christian religious monuments in Italy, France, Russia and other countries in the world.

According to a number of modern scholars, Prophet Zoroaster was born in South Azerbaijan. Medieval Muslim authors also mentioned this in their writings, citing ancient sources  One of the religious communities living in Azerbaijan is Baha’is. The Baha’i Community of Azerbaijan is an active part of society, contributes to the welfare of the Azerbaijani nation, eliminates bigotry, educates children and young people by showing love to all people regardless of their differences. The historical reality is that the territory of Azerbaijan is one of the first places where Zoroastrianism spread. It suffices to note that Zoroastrianism rose to the position of dominant religion.

The tolerance is not a product of the legal state; it is the creation of the society developed in cultural and spiritual aspects. Moreover, this is the typical feature of today’s Azerbaijan and today’s Azerbaijanis.

One can learn more about this at the Israel Academia Monitor conference on multi-culturalism at the Yemenite Heritage Center in Rehovot on September 5th at 5pm.   Dr. Dana Barnett, head of Israel Academia Monitor, claims that it is “an evening of scholarship, music, food and art celebrating the cultural mosaic.   The Yemenite Heritage Center is bringing Azerbaijani culture to the Israeli public via photographs, music and lectures on Azerbaijani multi-culturalism.   The goals of the event are to install an appreciation for multi-culturalism as a basis for cohesive communities.  If you are in Israel, please come and join us.”

About the Author
Sivan Gamliel is a freelance journalist based in Bat Yam. Originally from Nahariyya, she grew up exposed to the threat posed by Hezbollah based in Lebanon. She has a BA in communications from Emek Yezrael College.
Related Topics
Related Posts