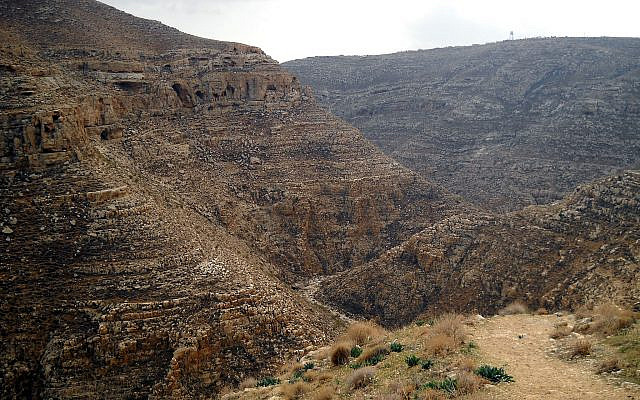 When we first meet Avram and Sarai, at the end of Parshat Noach, they are travelling. They begin their journey along with their family from Ur Kasdim (Ur of Chaldees) in southern Mesopotamia (probably Southern Iraq today) heading towards the Land of C’naan (Israel today). On their way they stop in Haran (south eastern Turkey) where Terach, Avram’s father passes away.

Parshat Lech Lecha (Breisheet 12:1) begins with God speaking to Avram: “Go from your land, from your birthplace, and from your father’s house, and go to the land that I will show you.”

Avram and Sarai set out along with Lot (Sarai’s brother and Avram’s nephew) and their followers towards the Land of C’naan.

Once in C’naan, they travel to Shchem, to Elon Moreh. God appears to Avram there and promises the land to his descendants.

Avram and Sarai then move to the mountain east of Beit El, pitch their tents between Beit El and Ai, build a mizbeach (altar) and proclaim the name of God. They then journey south, to the Negev.

During the famine, they travel down to Egypt and are sent away when Pharaoh discovers that Avram and Sarai are married.

They return to the spot where they originally pitched their tents, between Beit El and Ai. Lot moves to the lush Jordan plain (Sdom and Amorah) while Avram remains in C’naan.

God reaffirms His promise to Avram that the entire land would belong to him and his descendants.

They finally settle in Elonei Mamre, Chevron and Avram builds a mizbeach.

When Avram is told that Lot and his kinsmen are taken captive in a war, he takes his men and pursues them to Dan (north) to Chovah (to the left of Damascus).

Radak (Breisheet 12:6) explains that Avram was traveling through the land with his herds and flocks yet he was not challenged by anyone as being guilty of encroaching on their property, stealing their grazing land, etc. This was proof that God was with him. Avram was well aware that this was a demonstration of God’s keeping His promise to him that his very presence would be considered a blessing for the people surrounding him.

In the Talmud, Bava Batra 100a, we see that Avraham’s travels were a way for him to acquire the land:

After God promised the Land of Israel to Avraham, He instructed him: “Arise, walk through the land, its length and its breadth; for I will give it to you” (Breisheet 13:17), in order that Abraham should thereby acquire the land.

It was due to God’s love for Avraham that He told to him to travel the land, so that it would be easy for his descendants to conquer the land in the future. His walking the land was to demonstrate the divine promise and thereby emphasize his descendants’ claim to the land, but he did not formally acquire the land at that time.

The acquisition would only take effect after Avraham’s descendants would go down to Egypt and return and conquer the land with Yehoshua.

By traveling the land, we too show that we care.

We are now living in a difficult time where tourists who love the land can’t enter the country due to corona restrictions and Israelis were not permitted to leave their homes over the holidays, when most of the population traditionally goes touring and hiking.

May we quickly return to the days when we can travel the land and spend time in the places visited by Avraham and Sarah.