The Blogs
Annette Poizner
This Way Up: Psychological Means to Spiritual Ends
Apply for a Blog
Advertisement
Please note that the posts on The Blogs are contributed by third parties. The opinions, facts and any media content in them are presented solely by the authors, and neither The Times of Israel nor its partners assume any responsibility for them. Please contact us in case of abuse. In case of abuse,
Report this post. 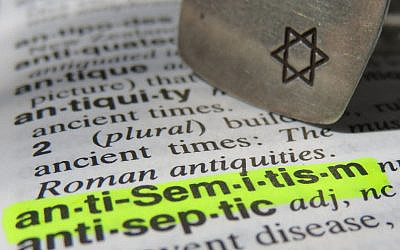 Reprinted with permission of Canva.com

A social work class in a New York City School of Social Work devolves into a raucous anti-Israel townhall. A Toronto university puts out an ad which details every form of oppression that it counters, omitting antisemitism. A fieldwork coordinator at a prominent Social Work school denies a Toronto student an internship at a Jewish Community Centre, citing the supposed “anti-Palestinian lean” of the setting.

A recent study analyzes the twitter feeds of 741 Diversity, Equity & Inclusion (DEI) staff at 45 American universities and finds 96 percent of their tweets about Israel to be critical of the Jewish state, while 62 percent of their tweets about China were favorable! The researchers, in their article entitled “The Inclusion Delusion,” report that the attitudes espoused vilify the Jewish state in a manner reminiscent of the antisemitism of old, easily constituting antisemitism.

At age 59, I didn’t expect to revisit campus activism. Then again, when I went on the flagship Jerusalem Fellowship mission 35 years ago, no one promised that the enemies of the Jewish people – and their values – would quietly settle down. I’ve used what I learned on that trip. And draw on the lessons now when activating to defend Jewish values – and to address problems in my field.
What problems? How about the fact that social work programs today – which teach every form of anti-racism in exquisite detail – omit the study of antisemitism and how to counter it? Or that some social work readings are perpetuating and advancing antisemitism. Or that social work education is a nightmare for Orthodox Jews attending social work schools. And other problems.
There’s an old expression, “that which gets inspected, gets respected.”  Concern about what is going on in social work schools, particularly relating to the experiences of Jewish students, prompted me to launch a research project – to learn what Jews studying social work are dealing with. I thought it would be important to bring forward the reports.
My partner in this effort: the Canadian Antisemitism Education Foundation (CAEF). as well as cosponsors: Hasbara Fellowships Canada, StandWithUs Canada, Doctors Against Racism & Antisemitism and the Alpha-Omega Dental Fraternity, Toronto Chapter.
In tandem with CAEF Executive Director Andria Spindel and a team of social workers, we designed a qualitative research study which involves interviewing current and recent Jewish students about their experiences. Despite their hesitation – fearing repercussions despite the way we cloaked their identities – these students have been coming forward. One student told me: “We’ve been waiting for you.”
What are we learning? We are hearing about students hiding their Jewishness for fear of being ostracized given faculty or readings that label Israel a colonial state despite a 3500 year Jewish connection to the land; students, forced to write papers that parrot the ideologies taught in school, finding themselves betraying their Jewish values or risk being mocked for expressing perspectives which differ from the school party line. We are hearing anecdotes: texts which vilify, campuses which are politically turbulent and even, at times, violent.
In our research study, the students who come forward, assured anonymity, are allowed to review the profiles we develop, making sure we scrub any identifying details including their particular university. Some describe social work education as traumatizing. These stories need to be told. We plan on publishing these findings in a prominent antisemitism journal but, in the meantime, continue to collect data.
Simultaneous to this research, we have undertaken other efforts. The Ontario College of Social Work announced their Diversity, Equity & Inclusion Task Force, mandated to consider every form of oppression, sans any mention of antisemitism. Jewish social workers addressed this omission via petitions, succeeding in getting antisemitism on the agenda. But without Jewish representation on the task force, will this be fruitful?
The Ontario Association of Social Work responded to the concerns we shared by organizing a seminar for members, providing education about the Jewish identity and the need to dismantle antisemitism. That’s a start! But until this education is a routine part of the social work curriculum, much more needs to be done.
The genie is out of the bottle. We now have an online platform for Jewish social workers and social work students from around the world, who come together to discuss these initiatives. Our newest petition – meant to be signed by the public – is lobbying for the inclusion of antisemitism in the social work curriculum. Individuals who are not Canadian can simply sign their city and country in the field labelled ‘Province’.
And, our research continues. Current social work students or social workers who have been in a Canadian university or college within the last seven years are invited to participate in an interview to inform us about their experiences. The more data we collect, the more we learn, the stronger the case we can make to upgrade the curriculum to address the needs of our community.
Back at age 25, when I was exploring Israel and attending seminars as part of the inaugural Jerusalem Fellowships, I wouldn’t have predicted more student activism for me . . . 35 years later! But here I am: writing, liaising, researching, meeting, networking, even making an animation, posted above. It’s a far way from Tel Stone, but the lessons of that trip reverberate. The priorities, values – and preservation – of the Jewish people stand tall before me. You, too? Please sign our petition.
To learn more about the research project please visit the research page on the CAEF website.
Annette Poizner, MSW, Ed.D., RSW, is a former fellow of the inaugural Jerusalem Fellowship program, a Registered Social Worker in Ontario, a published author and, at age 59, a campus activist, once again.
About the Author
Annette Poizner is a Columbia-trained clinical social worker who graduated with a Doctorate of Education in Counseling Psychology. Her work has been featured extensively in the media and in academic venues. A vocal advocate for the psychological utility of classic Jewish values and perspectives, she founded an imprint. Lobster University Press, which explores the work of Jordan Peterson. Her books (and coloring books) explore the intersection between some of Peterson's insights and Jewish wisdom.
Related Topics
Related Posts