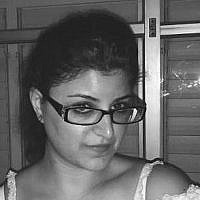 The Blogs
Shirah Cashriel
Apply for a Blog
Advertisement
Please note that the posts on The Blogs are contributed by third parties. The opinions, facts and any media content in them are presented solely by the authors, and neither The Times of Israel nor its partners assume any responsibility for them. Please contact us in case of abuse. In case of abuse,
Report this post.

There is a new kid on the block, the Gazan sensation Farah Baker. A sweet, intelligent, sixteen year old, she blogs about the Gazan conflict from her viewpoint, taking social media by storm.

In a recent SkyNews Google Hangout chat, Adele Raemer, the voice of Gaza area communities, had the opportunity for a true dialogue with Farah. At the end of the dialogue, Adele complimented Farah on her impeccable English, and asked her what her favorite book is. Her answer?

The Diary of Anne Frank.

She went on to explain that she identifies with the Jewish teenager and that she has even been likened to a modern-day, Gaza version of Anne Frank.

Farah lives a hard life. Hamas aggression involves launching rockets from densely populated areas, many of them falling within their own territory and killing their own civilians. Bombs are falling from the sky as the IDF retaliates in an attempt to protect her citizens from these rockets.  All while Israel sends in humanitarian aid, desperately needed by Gazans, which is subsequently blocked by Hamas. A field hospital erected at the Erez border crossing lies empty as Hamas prevents injured from accessing necessary care.

In spite of all this, the comparison to Anne Frank is abhorrent. Unlike Anne, who was persecuted solely on the basis of her Jewishness, no one is hunting Farah down; not for her views, nor for the mere fact that she is Gazan.

She is at risk solely because Hamas insists on fighting their battle from within the civilian population instead of from empty spaces, effectively using her and other civilians as human shields.

No one is looking to put her in a concentration camp to starve her to death, as was done to Anne Frank and is currently being done to Palestinians in Syria.

No one is looking to silence her. I, for one, am happy that her voice can be heard.  While I do not agree with many things she has to say about the current situation, and have the feeling that she is effectively acting as a Hamas mouthpiece, I think it’s a good thing that people abroad have access to what it is really like living inside Gaza.  Because the conditions are appalling, and the world needs to know that.

She has been asked directly if she ever actually read The Diary of Anne Frank. She has yet to respond to this query. But I have a feeling that she hasn’t. For if she had, she’d be aware of the vast differences between her life and the life of Anne Frank.  Either that or she is choosing to ignore them in order to further the disgusting ongoing comparison of the Zionists to Hitler.