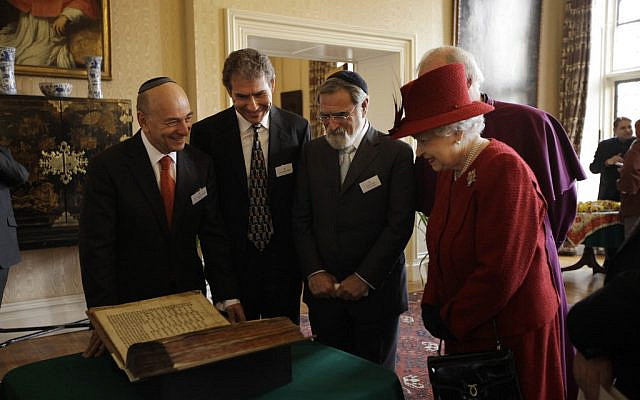 Former Board of Deputies President Vivan Wineman with Rabbi Lord Sacks, showing her Majesty the Queen and Prince Philip the Codex Valmadonna, which is the oldest Jewish manuscript which dates from the period prior to the expulsion of the Jews from England in 1290.  (Via Jewish News)

The Jewish communities’ links with the Royal Family have always been strong but never more so than in recent years. Next year the Queen comes up for her Platinum Jubilee, – an unprecedented seventy years on the throne

. Nine years ago as an eighty five year old  spring chicken she celebrated her Diamond Jubilee. The very first event, she prescribed for it then, was an inter faith  reception where all the nine religious faith communities in the UK exhibited.

The reception took place at Lambeth Palace, the seat of the Archbishop of Canterbury, the primate of the  Church of England ,of which the Queen  is the nominal head.

The idea was that each faith community should make a loan to the exhibition of an artefact which symbolised its connection with the UK.

For us at the Board of Deputies of British Jews, the choice of artifact was obvious.

The Codex Valmadonna is the oldest, in fact the only Jewish manuscript which dates from the period prior to the expulsion of the Jews from England in 1290.

There are other fragments which can lay claim to having been produced here, but this codex is the only substantial document, of which this can be said with a high degree of probability. It comprises the chumash ,hafatrot and parts of other books of the Bible. Its connection with England is obvious but also intriguing, and involved a fair amount of detective work.

First though, some background is needed. Though there may have odd groups of Jews in this country beforehand, the community really began with the arrival of William the Conqueror. The Jews came from Northern France, spoke French and were mainly engaged in finance dominating the financial sector in England at the time. At first they prospered. With the rise of the crusading spirit in the twelfth century, however, their lot deteriorated. The first blood libel anywhere in the world occurred in England, in Norwich. On the accession of Richard the First (Lionheart) the Jews were subjected to appalling massacres, throughout the country. The most notable was in York in 1190. Thereafter the position of the Jews declined, debts owed to them were regularly cancelled, their economic position was undermined further with the influx of continental non-Jewish money lenders. In 1290 the, by now impoverished and demoralised, community was expelled by Edward I, not to return for more than three hundred and fifty years. The Codex Valmadonna was not needed here.

Identifying  the origins of a manuscript is much harder than those of a printed book. There is no publishers mark, no dedication , no introduction, no ISBN number nothing on the face of it to indicate its origins. As with Bibles generally, though, owners wrote their names and location in the book. The owners of the Codex who left their mark were all German and it was assumed therefore that this was a German book.  It changed hands numerous times down the centuries, until it was acquired by David Sassoon of the great Sephardi banking family  – one of the greatest book collectors in Jewish history. His son, appropriately called Solomon, though a great scholar and thinker, did not want to keep the collection and the Codex was sold at auction in 1978. It was bought by the Valmadonna Trust whose Custodian, Jack Lunzer, was another great book collector.

Valmadonna acquired it on the understanding that it was a German book but as they researched it they found that this was not clear. The one thing that was certain  about the book was the date when the scribe finished writing it. At the end of the book, as was common,  he wrote a line expressing his pleasure at completing it, and giving the Hebrew date 15thTammuz (4)949 i.e. 2nd July 1189. The researchers found this baffling because the quires were stitched and pierced using a technique not employed in Germany or Northern  Europe at that time. The technique was developed in England and not exported to the continent till the middle of the 13th century. The suggestion was made that this could be an English manuscript. This was more or less settled, when the text was examined further, and marginalia were noticed translating Hebrew words not into German but into Norman French which was the language of the ruling classes in England at that time. The possibility that the book was written abroad and then brought to England can be dismissed as extremely improbable.

But if it was written in the England how did the manuscript find its way to the continent? One possibility is that its owner perished in one of the massacres. One of the chroniclers of the period Ephraim of Bonn wrote that the rioters killed the Jews stole their gold and silver and also ‘their beautiful books which were even more precious’. These they took and sold in Cologne.  This would give the book a role in the martyrology of Anglo Jewry. Alternatively, the book could have been taken by one of the expelled Jews on his flight from this green and pleasant land a century  later.

With David Sassoon, the book completed its journey and returned to this country. It has now been sold and has therefore resumed its journey- a loss to English Judaica. We should not  complain too much however. The three great depositaries of Judaica in this country the British Museum, the Bodleian library at Oxford and the Cambridge University  library, our golden triangle ,have a truly vast treasure of Judaica and other non-Jewish antiquities almost all of which were produced overseas.  The Cairo Genizah comes to mind, as do the Elgin Marbles. In the balance of trade in antiquities, we are definitely winners.