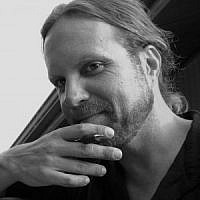 The Blogs
Mark Menachem Blacknell
Apply for a Blog
Advertisement
Please note that the posts on The Blogs are contributed by third parties. The opinions, facts and any media content in them are presented solely by the authors, and neither The Times of Israel nor its partners assume any responsibility for them. Please contact us in case of abuse. In case of abuse,
Report this post.

I’m optimistic when it’s warranted, so in the beginning I really tried hard to figure out what good could actually come from President Obama’s nuclear deal with Iran. I initially thought, “Wait a minute here. We really don’t know what’s going on behind the scenes. Maybe the aim of all of this is to exponentially enhance Western intelligence capabilities in Iran to better prepare for war? If Iran opens up, more friendly eyes will be on the ground. Brilliant!”

As soon as I dug into the meat and potatoes of the agreement however (or at least the parts that are available to the public), my stomach sunk. The deal is too heavily contingent upon Iranian compliance and transparency and therefore doesn’t open Iran up to anything but cash flow to expand its nefarious aims. So let’s get that thought out of our heads once and for all. This deal is not a brilliant intelligence gathering ploy. Let’s get another thought out of our heads once and for all. As Secretary Kerry and President Obama have both said this deal has nothing to do with peace. It has to do with trying to prevent Iran from having a nuclear weapon without going to war.

My love of history makes me fear this deal more than most because it eerily reminds me of a similar agreement that seventy seven years ago cost many more lives than it saved. Weary from the mass horrors of World War I and hoping to avert another war, the international community, led by British Prime Minister Neville Chamberlain, reached an agreement to “appease” the National Socialists of Germany in 1938. The international community knew that they were dealing with an aggressive, oppressive, anti-Semitic, totalitarian regime whose goals and objectives were publicly stated and viciously carried out since the early 1920s. Predictably, Hitler never intended to abide by the terms of the agreement and used the peaceful intent of the west to strengthen his military and political forces. As history later proved, the agreement emboldened Hitler and appeasement led to an even bigger, bloodier World War than the first one. It also allowed Hitler to follow through on his public promise to annihilate the Jews of Europe and millions more that opposed his radical ideology (domestic dissidents, Communists, gypsies, gays, the disabled, etc.).

Weary from the mass horrors of Iraq, Afghanistan, Syria and a litany of other wars in the region/world, the international community led by American President Barrack Obama, reached an agreement with the Islamic Republic of Iran in 2015. The international community knows that they are dealing with an aggressive, oppressive, anti-Semitic, totalitarian regime, whose goals and objectives have been publicly stated and viciously carried out since the late 1970’s.

With history in mind, I find the details of the deal to be irrelevant. What matters is that this deal relies on the compliance of an oppressive, theocratic, ideologically intolerant state that has never once abided by any international agreement it entered into. Predictably, the Ayatollah will use the peaceful intent of the agreement to more effectively wage war. His previous behavior and behavior since the agreement show that, like Hitler, he too is emboldened by the west’s unwillingness to confront him and therefore the deal will lead to an even bigger, bloodier war. It will also allow the Ayatollah to get dangerously close to his stated goals of annihilating the State of Israel and millions more that oppose his radical ideology (domestic dissidents, Sunnis, allies of the US and the West).

Despite arguments that discuss mainstream Iranian opposition to the hate-laced rhetoric of its hard-line leaders, the regime’s words and actions concerning America and its allies are consistent. The Ayatollah’s ideology won’t change one iota because of a little good-will from the international community. Days after the agreement was signed the Supreme Leader publicly stated as much. The rational absurdity of this deal symbolizes far more than most of us can imagine. No one can argue that war is preferable to peace, as a former Marine I know better, but any deal hinged on Iranian compliance is suicidal.

In deed and doctrine, the Islamic Republic of Iran has never and will never advocate for the peaceful resolution of differences with the United States or its allies. All parties involved in this process concede that peace is not the intent of the Iran nuclear agreement and therefore peace with Iran cannot be used to justify it.

I caution you: If you support this deal or do nothing to stop it, ultimately you are responsible. If you oppose the deal and haven’t yet spoken out against it, please copy and paste the below and email it to your US Senators and Congressmen. You can find your representative’s email at: http://www.contactingthecongress.org/

CUT AND PASTE INTO EMAIL

Dear Honorable Representative, I do not support President Obama’s nuclear deal with Iran because I believe it will go down as the single most ruinous diplomatic blunder in American history. While war is never preferable, neither is appeasement of our self-appointed enemies. Poll after poll shows that the American people do not support the deal. As a member of a government “by the people, for the people,” you must lead the people by following the will of the people. As my representative, I’d like to see you distant yourself from the agreement and vocally advocate for its rejection. I believe this is not only in your long-term political interest but in the long-term interests of our nation and world. Thank you for seriously considering my voice.