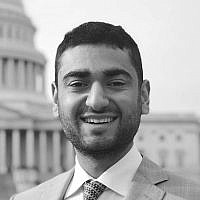 The Blogs
Amir Kashfi
Apply for a Blog
Advertisement
Please note that the posts on The Blogs are contributed by third parties. The opinions, facts and any media content in them are presented solely by the authors, and neither The Times of Israel nor its partners assume any responsibility for them. Please contact us in case of abuse. In case of abuse,
Report this post.

We are observing Sukkot, commemorating the wandering of the ancient Israelites through the desert in search of their promised land. More than a recognition of the physical wandering, Sukkot reminds us that we experience periods of profound metamorphosis. Like a caterpillar in its cocoon, the ancient Hebrews could not yet appreciate the miracle that awaited them in their journey from slavery to independence.

So too do the people of Iran embark on a journey of metamorphosis. In what can now be characterized as Iran’s greatest uprising since the 1979 Islamic revolution, the people of Iran are taking to the streets in demand of the universal human rights we take for granted. But unlike the ancient Israelites protected by a god who sheltered and nurtured them, today’s brave Iranians are being gunned down without divine intervention. They chant, “women, life, freedom” as the Islamic regime responds with tear gas and live ammunition.

It is fitting that Iranian women lead the way. The subjugation of women has always been at the core of the Islamic regime’s theocratic values. Following the Islamic revolution, Ayatollah Khomeini declared that the compulsory hijab alone was a sufficient justification for the revolution. Indeed, the compulsory hijab is the most visible element of a misogynistic regime defending itself against its most powerful threat— women.

But the Iranian people have endured much more than the compulsory hijab. Jews, Bahai’s, Afghans, Kurds and other minorities face state sponsored harassment. Gays are hanged from cranes for the crime of their homosexuality. Freedom of expression is nonexistent. To distract from these heinous crimes against its people, the Islamic regime foments terror around the globe through its proxies in Syria, Iraq, Lebanon, Gaza, and Yemen. Hundreds of civilians from Beirut to Buenos Aires have been killed in its bombing campaigns. Its assassins act with impunity against regime dissidents in Europe and North America.

Such a regime cannot be trusted. Any deal, nuclear or otherwise, further enriches the world’s largest state sponsor of terrorism at the expense of the brave women being slaughtered in the streets. Now is the time for the free world to organize stiffer sanctions and greater penalties on the mullahs and their thugs. We owe the Iranian people our full material and diplomatic support. When we fail to speak out, we risk our own shame and hypocrisy. The US faced a similar choice during mass protests in 2009, then in response to a sham election. In pursuit of a nuclear deal, we played footsie with the mullahs while brave Iranians were butchered in town squares. We cannot afford another lapse in our moral judgement. Regime change is not a radical position. Appeasing and sustaining a terrorist theocracy is the true lunacy. Those who view the Islamic regime as a legitimate actor betray their own naivety- or their ulterior allegiances.

These courageous Iranian rebels do not have free and open access to the internet. They do not have the means to defend themselves. They do not have a divine protector like the ancient Israelites. They only have each other. Now is the time to be their voice, so that they too may reach their promised land.

About the Author
Amir Kashfi is an MD/ MPH student at the University of Arizona College of Medicine- Phoenix, where he serves as the student body president. He previously attended UCLA and is an LA native.
Related Topics
Related Posts