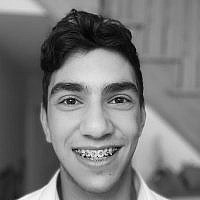 The Blogs
Avishai Tebeka
Apply for a Blog
Please note that the posts on The Blogs are contributed by third parties. The opinions, facts and any media content in them are presented solely by the authors, and neither The Times of Israel nor its partners assume any responsibility for them. Please contact us in case of abuse. In case of abuse,
Report this post.

The Iron Dome, one of the most technologically advanced defense systems of the century, amazed the world with its innovation. In simple terms, the Iron Dome is a system designed to intercept incoming rockets and artillery shells mid-air from up to 70 kilometres away. It was created by Israeli company Rafael Advanced Defense Systems and Israel Aircraft Industries and was first deployed on the 27th of March, 2011, in Beer Sheva. The system proved how successful it was after shooting down a missile from Gaza on April 7 of that same year. The Iron Dome is very effective as it can shoot hundreds of rockets down at high speed, as well as aiming the missiles very precisely at specific targets. Israel even started to profit from this system by selling it to other countries. Its effectiveness has allowed many Israeli civilian lives to be saved, benefiting Israel as a whole.

Here are five cool things that I found particularly interesting about the Iron Dome:

The Iron Dome has benefited and saved countless lives over the past two decades. After the IDF killing of Zohair al-Qaisi (the secretary-general of the Popular Resistance Committees) in Gaza on 9 March 2012, more than 300 rockets were fired at Israel. 177 missiles fell into Israel and the Iron Dome intercepted 56 of those rockets that were directed at large cities. In 2014, during operation Protective Edge (which began in response to over 100 rockets launched at Israel during 24 hours by Gazan soldiers), the Iron Dome intercepted rockets launched from Gaza towards southern, central and northern parts of Israel. During the 50 days of the conflict, 4,594 rockets and mortars were fired at Israeli targets; the Iron Dome intercepted 735 projectiles that it determined were threatening, and achieved a 90% interception rate. Only 70 rockets fired at Israel from Gaza failed to be intercepted. One civilian was killed and three others and nine servicemen were wounded by mortar bombs, but they were not in areas protected by the  Iron Dome. One can only imagine how many more innocent lives would have been lost without the Iron Dome missile defence system. Only 25 percent of rockets fired were determined to be threatening due to the low accuracy and unstable trajectory of the poor-quality rockets fired.

In conclusion, the Iron Dome is a truly successful Israeli technological advancement of the past decade. It saves many lives, by being deployed every time missiles are fired at Israel. Millions of lives are saved, jobs are uninterrupted, and people feel more secure. Israel has also made lots of money selling their system to other countries while also trying to protect Israel and its citizens from danger due to the ongoing Israeli and Arab conflict.

About the Author
Avishai lives in Maple Ontario, and goes to high school in Toronto. He has had a passion for talking about Israel and advocating for the state of Israel with Hasbara Fellowships and also from his early childhood. He also writes up essays or dvar Torah for his high school when he has an opportunity every holiday.
Related Topics
Related Posts
Comments