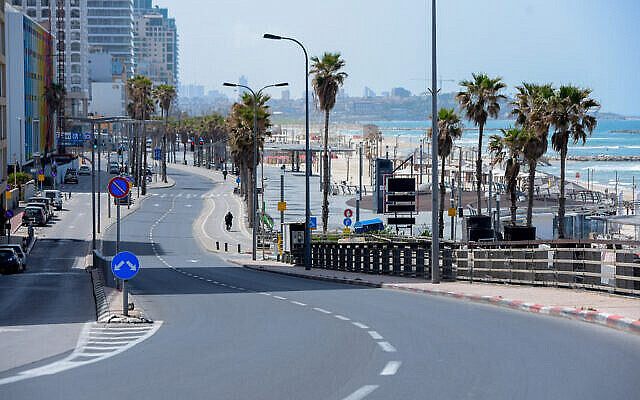 The empty promenade and beach along the shore of the Mediterranean Sea in the Israeli city of Tel Aviv is seen on March 28, 2020. (Avshalom Sassoni/Flash90)

As the Israelites self-isolated in preparation to leave their life of slavery in Egypt, so too, now, in Israel and in many other places around the world, we are self-isolating in the hopes of protecting ourselves. A plague then and a plague now. The irony has not been missed; it isn’t funny.

Here in Israel an aura of surrealism has settled over the country. The weather is gorgeous, just the right kind of weather that calls us outdoors to hike, explore, and enjoy the spring bloom (at least those of us without seasonal allergies). Not this year. For several weeks now we have been under orders to stay at home. For nearly the past two weeks, our ability to venture more than 100 meters from our homes has been curtailed. The hope is that this extreme social distancing is helping us avoid casualties to the disease and help us flatten our curve faster than has been observed in other countries.

And yet, it has not been well observed in the Haredi enclaves of Bnei Brak and Mea Shearim in Jerusalem, among other predominantly Haredi communities. And now we are seeing the results of this non-compliance. Not only are we seeing skyrocketing rates of infection, we are also seeing the closure of these communities and towns, and the looming order to stay in our houses for the night of seder. Unlike our ancestors, we will not be able to flee to freedom come seder night. Thankfully we are mostly free these days.

It’s ironic, isn’t it? The freedom of movement for Israelis has been curtailed almost to zero because the ultra-religious communities couldn’t abide by the regulations and guidelines. We have trapped ourselves through the actions of a minority of the country. Soon enough, though, based on demographic projections, that minority will come to be a majority in Israel. Let that sink in for a moment.

I have no problem with everyone having his or her level of observance and belief. I believe that each individual is entitled to make these decisions for his or herself. I believe that we are endowed with that capacity as human beings. And I believe that when we choose to live in a society we are obligated to adhere to the rules and regulations of the society, starting with those from the top down, not the bottom up.

Having now been home for a month, in addition to most of the week of Purim before, with my family, is wearing and exhausting. The mind begins to wander and contemplate our situation. I am struck by another ironic reality of today – Netanyahu came out very forcefully at the start of the outbreak here with firm measures to gain control over the spread of the coronavirus. Except in the realm of religion and in the ultra-Orthodox communities. Understandably, the power of Litzman as a Haredi member of Knesset and the Minister of Health (with no medical qualifications, mind you), influenced the decision making process. And yet. And yet. Now we are in a situation where the government is already clamping down on the Haredi communities and more restrictions are coming their way because the virus is out of control there.

Is this a savvy political play? Let those who contribute the least and take the most from the State coffers be the last ones left out in the streets, contaminating themselves? Is this a situation of if you give someone enough rope…? I’m a mother of three children and I know that sometimes we have to let our kids learn their lessons on their own, even if we could teach them faster and with less risk.

I have a hard time seeing this as a political play on the part of Netanyahu, although his political machinations are epic. Again we are seeing the Haredi communities driving policy decisions, although this time, they are likely to pay the highest price. Now and in the coming months and years.

Like I said, there’s a great deal of irony in the air this Pesach, and none of it is humorous. No one is laughing. May we all soon know healthier days, together with our extended families to celebrate over matzo or chametz.

About the Author
Rachel Gould made aliyah in 2010 to Haifa and now lives in Yokneam. She is a PhD Candidate in Public Policy at TAU focusing on environmental and population policies. She was a candidate for city council in Yokneam on the Mekomi list in 2018.
Related Topics
Related Posts
Rachel Gould
Comments