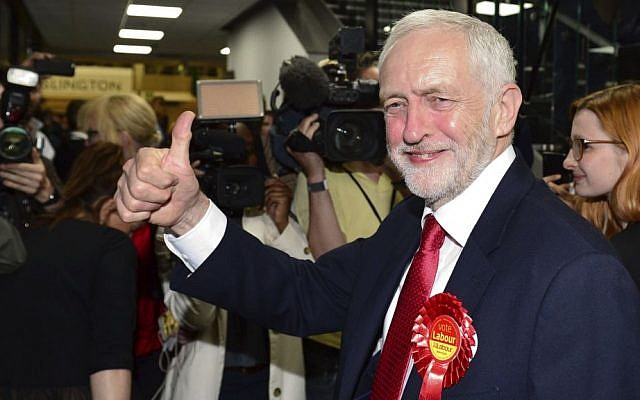 Britain's Labour party leader Jeremy Corbyn gestures as he arrives for the declaration at his constituency in London, Friday, June 9, 2017. (Dominic Lipinski/PA via AP)

Whereas other forms of racism tend to demean people because of their race, ethnicity or sexuality the Jews are hated because they are considered omnipotent therefore responsible for all the evils of the world.

But the antisemitism expressed by members of the British Labour Party didn’t stop the electorate voting for them in their millions. Even on election day a woman was filmed at a polling booth in a Jewish area calling on people to vote Labour “to get the Jews out.”

And in the end the Jews were powerless to help themselves. In the end the leader who brought all this antisemitic controversy with him to the fore was returned with more seats than his ethnically Jewish predecessor. I suppose it’s testament to the faith British Jewry has in the British people that they assumed the reporting of incidents of antisemitism would disgust their fellow citizens enough to put them off Corbyn. Instead we’ve seen many come to believe that the reports of antisemitism are a “plot” to “smear” the exalted leader Corbyn to hold him back.

All this reminds me of a statement made by a demonstrator attempting to prevent Hen Mazzig from speaking at UCL in Central London. While standing in a crowd of screaming demonstrators who were just appalled that a small group of Jews might want to hear a talk by an Israeli officer in the IDF she said “in the 21st century we don’t need no Jewish majority state”. Of course this whole sordid affair demonstrated perfectly why, even in the twenty first century, we do.

Now the Labour Party has surged. It did not win the general election but it did gain a significant number of seats and force a hung Parliament. It gained momentum and swept through constituencies it hasn’t previously held for years.

And the antisemitism? Forgotten, irrelevant. Along with the victims of it.

Now instances of antisemitism will clash with the prevailing wind. Young people filled with hope for a left wing future voted for Jeremy Corbyn in droves. From now on it will be against their voices that young Jews will be shouting. Now the Jews will be the spoilers, the ones ruining everyone else’s good time when they talk about their antisemitism problems. It was bad enough before, now it will be impossible to point them out without being shouted down.

In the wake of Al Jazeera’s documentary “The Lobby” one Member of Parliament wrote to Theresa May concerned that there was a plot against British democracy. His name was Jeremy Corbyn. His concern for British democracy wasn’t so evident when he was accepting money from the Islamic Regime in Tehran to work for their mouthpiece Press TV. The timing couldn’t have been worse, he was appearing for them while the thugs of the regime were murdering pro-democracy Iranians on Tehran’s streets. But I suppose the young hopeful British voters don’t care about that either.

This dilemma is hardly one Jews are unfamiliar with. Time and again Jews have been forced to choose between remaining and fleeing from the countries they were born in. Time and again Jews have remained in the land of their birth only to understand too late what a terrible mistake that was. A million Russians waited impatiently for the Iron Curtain to fall before clamoring into Israel. French Jews are leaving in droves, not just for Israel but for the UK too. I hope they haven’t made a mistake. I hope British voters haven’t made a mistake. But I know that they have.

When it comes to whether to vote for promises to shore up an ailing health system, invest more in infrastructure and scrap tuition fees, Britons sold their votes cheaply for Corbyn’s empty promises. The concerns of the Jews complaining about antisemitism were ignored. And now we get to sit and wait, far from omnipotent. Jews raised their concerns and were ignored because, you know, their concerns were irrelevant.