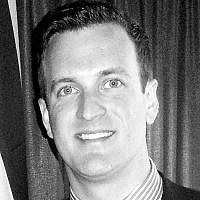 The Blogs
Robert David Onley
Apply for a Blog
Please note that the posts on The Blogs are contributed by third parties. The opinions, facts and any media content in them are presented solely by the authors, and neither The Times of Israel nor its partners assume any responsibility for them. Please contact us in case of abuse. In case of abuse,
Report this post.

With reports indicating that Islamic State militants are managing to gain territory in Iraq and Syria in spite of US and coalition air strikes, the world is witnessing a nightmare scenario unfold across the Middle East: what if the Islamic State simply cannot be stopped?

After writing extensively about radical Islam in both fiction and nonfiction, from Sunni jihadists with AK’s to Shia theocrats pursuing nuclear weapons, last year Rosenberg set out to examine whether a terror threat existed that he was not yet aware of, but ought to be.

Helping his investigative efforts, Rosenberg is a former advisor to Prime Minister Netanyahu with an extensive network of friends and officials whom he tapped to explore the question above. In researching The Third Target, Rosenberg met with two former heads of the CIA, R. James Woolsey and Porter Goss, and the former head of the Mossad, Danny Yatom, among many other intelligence officials. Months before the Islamic State, or ISIL, burst onto the international scene, the answers Rosenberg heard separately from these intelligence chiefs were both unanimous and chilling.

“They each were concerned that Al-Qaeda in Iraq was morphing into something new, something more dangerous,” Rosenberg says. In early 2014, while President Obama went on the record claiming that ISIL was merely a “jayvee team” and hardly worth worrying about, Rosenberg stated, “these officials warned me that what kept them up at night was the rise of this Al-Qaeda offshoot, ISIL, and the reality that an Islamist-led overthrow of Jordan was a genuine worst-case scenario and a possibility.”

Rosenberg meeting with Jordan’s Prime Minister Abdullah Ensour in Amman as part of the research for “The Third Target.”

These foreboding comments prompted Rosenberg to dig further. After more meetings in Washington, he traveled to Jordan, meeting with Jordan’s Prime Minister Abdullah Ensour, Foreign Minister Nasser Judeh, and Interior Minister Hussein Al-Majali to discuss regional threats. Mentioning potential plot ideas, including a chemical attack and the risk of an overthrow, Al-Majali responded to Rosenberg, “the King has appointed me to make sure the scenario that you are writing about will never happen in our country. But it is a plausible scenario, and that is the problem.”

“What if ISIL tries to set into motion attacks on a number of targets – and what if one of those targets was Jordan, Israel, or the United States?”

After digesting countless intensive interviews with Western and Middle Eastern officials, Rosenberg sat down to write The Third Target, which, soon after the first draft was finished and in light of ISIL’s rapid rise across the Middle East, had its release date pushed up by three months. Published early on January 6th of this year, The Third Target imagines a scenario in which ISIL captures a cache of chemical weapons in Syria, and threatens to deploy them against an unknown city. Rosenberg says, “the question I wanted to ask in this book was, what if ISIL tries to set into motion attacks on a number of targets – and what if one of those targets was Jordan, Israel, or the United States?”

As if the plot was ripped from the headlines and bringing the pages of The Third Target alive, Jordan’s King Abdullah recently stated publicly on CBS News that the battle against ISIL, is, in effect, “our generation’s Third World War.” But in order to stop ISIL and thwart any attempt to attack Jordan, Rosenberg believes that President Obama and the leaders of NATO must view ISIL as “such a significant threat to national security” that the US takes “decisive military action, with no more half measures.”

Rosenberg cites a long list of realistic military actions that the US is not currently conducting to help destroy ISIL, including not allowing U.S. Special Forces on the ground to provide precise targeting for air strikes, and not permitting 24/7, 7-day a week airlifts of supplies to Kurdish troops fighting in northern Iraq, “even though the Kurds are the most aggressive fighters and the most immediately endangered by ISIL.”

Critiquing the Obama Administration, Rosenberg pulls no punches, saying of Obama’s half-hearted campaign against ISIL that, “This is not working. This is not decisive action. This is foreign policy by press release.” Arguably Obama’s failure to act decisively also lends credibility to the terrifying potential for the ISIL-led chemical weapons attack that is envisioned in The Third Target.

“Obama is also missing the greatest strategic alliance against radical Islam in history.”

But beyond the US not showing up in Paris to show solidarity following the Charlie Hebdo attacks, Rosenberg notes that, “Obama is also missing the greatest strategic alliance against radical Islam in history.” Rosenberg believes three men emerging who are the “Winston Churchill’s of our time, and none of them are in London, Paris or Washington. They are all in the Middle East.”

Rosenberg lists Israel’s Prime Minister Netanyahu, Jordan’s King Abdullah II, and Egypt’s President el-Sisi, as the only global leaders who truly see the existential threat posed to them and to their people by two different, but equally radical Islamic forces: the Shia radicals in Iran, and the Sunni radicals of ISIL. “President el-Sisi and King Abdullah II have no qualms calling this a battle against radical Islam,” Rosenberg pointed out, “while President Obama and his Press Secretary refuse to use the term ‘radical Islam’ for fear of being ‘offensive.’” The difference in mentality could not be more stark.

Not only is Jordan committed to fighting radical Islam militarily, Rosenberg says King Abdullah II and his team are also committed to deconstructing radical Islam theologically, stating, “I sat with the King’s men, who explained how they are rallying support among hundreds of Islamic scholars all across the Middle East and the world to explain their version of moderate Islam, and to deconstruct what they call takfiri Islam, which is what the radicals believe.”

“President el-Sisi told the imams that they “must revolutionize and reform modern Islam”, with Rosenberg adding, “Sisi did so at a real risk to his own life in Egypt.”

Rosenberg further cited Egyptian President el-Sisi’s recent speech to Muslim clerics on New Years Day, where el-Sisi told the imams that they “must revolutionize and reform modern Islam,” with Rosenberg adding, “Sisi did so at a real risk to his own life in Egypt.” Netanyahu similarly has spoken out against the threat of radical Islam on numerous occasions. All the while, Rosenberg says, “These are allies at risk, and Obama simply won’t help these men win the battle.”

As ISIL marches, the regular stream of their grotesque snuff films continue to inundate the mainstream news. On the surface, the incomprehensibly evil actions of ISIL seem to be the product of mass delusional hysteria – violence for the sake of violence. But Rosenberg hints at a deeper motive for ISIL and their ilk, one grounded in a strict interpretation of the Quran and hadiths.

“Both the radical Sunnis and Shias have an eschatology – or End Times belief system – that talks about establishing the Islamic Kingdom or Caliphate: the radical Shias are waiting for their Messiah while they build nuclear weapons, before picking an apocalyptic fight with the West or another nation in the region,” Rosenberg explains.

“ISIL…[is] building the Caliphate now, desperately trying to usher in End of Days by killing and enslaving those caught up in their apocalyptic, genocidal vision.”

However Rosenberg contrasts this belief with those of radical Sunnis, such as ISIL, who he says have decided not to wait: they are building the Caliphate now, “desperately trying to usher in End of Days by killing and enslaving those caught up in their apocalyptic, genocidal vision. I spoke to one Pastor in Iraq, who said to me: ‘Joel, this is demonic. When ISIL chops off someone’s head, this is not just terrorizing – these are blood sacrifices to the Islamic State’s ‘God’.’ These are the genocidal conditions emerging in Iraq and Syria.”

In writing The Third Target, Rosenberg hopes to bring readers into the ‘living room’ of the savage, barbaric mindset of ISIL, to help people see how urgent the threat is, and explore why we must act decisively to crush it, “When I started to write this book, I was thinking that the threat was 4 to 5 years away. It moved much faster than I expected.”

Underscoring the intensity of Joel Rosenberg as an author and advocate, and emphasizing his passion when speaking out about these issues, Rosenberg and his family recently made Aliyah to Israel after living their entire lives in the United States. As an evangelical Christian with a Jewish father, Rosenberg says that he wants to use his novels “to inform people in the West, generally, and Christians in particular, that now is the time to stand with Israel, Jordan, Egypt, and all people of good will who will fight against radical Islam.”

He says that he is honoured to stand with Israel in this fight, and notes that in due time his sons will be drafted to serve to protect Israel, “I believe that there is a great movement of Christians around the world who love Israel, who are standing with the Jewish People, and that my role and contribution to Israeli society is trying to educate and mobilize that Christian support for Israel, especially at this time, when the battle against radical Islam is so urgent.” The Third Target is his latest salvo in that fight.

Robert D. Onley is a lawyer from Ottawa, Canada, Co-Founder of the Young Diplomats of Canada, and a member of the World Economic Forum’s Global Shapers Community. Twitter: @RobertOnley

About the Author
Robert David Onley is a lawyer and freelance writer from Ottawa, Ontario, Canada. He is the Co-Founder of the Young Diplomats of Canada, and a member of the World Economic Forum’s Global Shapers Community in the Ottawa Hub. robert@robertonley.com
Related Topics
Related Posts
Comments