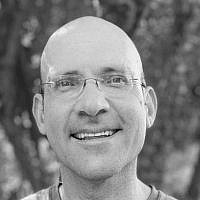 The Blogs
Jordan Herzberg
Apply for a Blog
Please note that the posts on The Blogs are contributed by third parties. The opinions, facts and any media content in them are presented solely by the authors, and neither The Times of Israel nor its partners assume any responsibility for them. Please contact us in case of abuse. In case of abuse,
Report this post.

The Israeli Air Force (IAF) is known as one of the best air forces in the world. It operates hundreds of F-16 and F-15 jet fighters, and since 2016 is flying the new F-35 stealth multi role combat aircraft. According to foreign reports, the IAF was the first air force in the world to use the F-35 in a combat mission. For the past few years sonic booms are often heard over the north of Israel. According to foreign reports, these are most likely Israeli jet fighters on the way to strike Iranian installations on Syrian soil.

What is not as well-known is the role that Israel’s 114th and 118th squadrons of CH-53 helicopters play behind the scenes in these alleged attacks.  In the aftermath of the dozens of Israeli pilots shot down and imprisoned by Egyptian and Syrian forces in the 1973 Yom Kippur War, the IAF created a unit solely dedicated to rescuing pilots shot down over enemy territory.  The unit, 669, is known for conducting harrowing missions, rescuing pilots and fighters from elite units caught behind enemy lines.  Since the unit’s founding, the CH-53 has time and time again, brought back home fighters safely to Israel.  Each time there is IDF activity over enemy territory, more likely than not a CH-53 helicopter is on standby.

The CH-53s, called Yassur in Hebrew, have proven extremely reliable for five decades, but their fatigue has started to show.  After a series of crashes, many fatal, the IAF officially began searching for a replacement for the Yassur, and last week it was announced that the Air Force has decided to purchase the newest version of Lockheed Martin’s CH-53K.  The new helicopter, to be delivered sometime in 2025, will be stronger, faster, and more durable than the IAF’s current version.   While an official decision has not been made yet on the number of aircraft to be purchased, it is estimated that Israel will purchase around 20-25 helicopters.  At approximately $100mm per aircraft, this $2 billion -$2.5 billion purchase will be financed by the $38 billion US foreign military financing assistance program signed with Israel in 2016.

The CH-53K will not be arriving a minute to soon. The Yassur’s advanced age (most of them were built in the 1960s), make acquiring spare parts a challenge.  Unfortunately, in recent years, emergency landings and crashes, fatal and non-fatal, have taken its toll.  The latest incident occurred in November 2019 during a training flight, when a Yassur was forced to make an emergency landing after a fire started mid-flight over the northern Negev.  The helicopter exploded and was engulfed in flames seconds after the crew and the fighters from an elite commando unit successfully ran out of the aircraft.  Hopefully, this will be the last flight mishap before the arrival of the CH-53K in 2025.

About the Author
Jordan Herzberg has been active in diplomacy, security, and business affairs in Israel for over 20 years. Serving as a track two diplomat for several Israeli Prime Ministers, Jordan participated in hundreds of hours of back channel negotiations with neighboring Arab heads of state, and has advised several Israeli government ministers. He served as lone soldier in the Paratrooper Brigade, and currently serves as a commander in a combined paratroop/infantry/armored division, with the rank of Lt. Col. (Reserves). He serves as the representative of Abu Tor in the Greater Baka Community Council in Jerusalem. Born in Montreal and raised in Miami, Jordan made Aliyah in 1993.
Related Topics
Related Posts
Comments