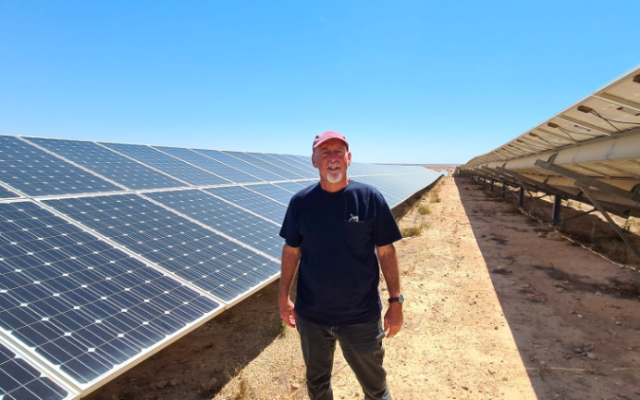 The Ramon Air Force Base Solar Field - Proof of Concept

After making innumerable discouraging speeches about our country’s pitiful performance in promoting renewable energy and even penning my share of gloomy climate blogs for the Times of Israel, it seems high time to finally report some good news. And it comes from where environmentalists probably least expect it. So, here we go:

This week I went down south to the Ramon air force base in the Negev.  As Israel’s second largest military installation, most visitors come to admire its sophisticated helicopter fleet or cool stealth fighter jets. My interests, however, lay elsewhere: in military circles the Ramon base is considered a bona fide pioneer in sustainability, with the IDF’s most significant solar energy field.

Upon arrival, I not only met with the base’s commanders and solar engineer, but also a small delegation of the Israeli army’s top officers in the area of energy efficiency, renewables and sustainability.  As a member of Defense Minister Benny Gantz’s Blue and White party, and chair of the Knesset’s first subcommittee to focus on climate change, I have been engaged in assessing whether Israel’s military is realizing its potential contribution to Israel’s collective efforts to reducing greenhouse gas emissions and moving to a low carbon economy.  I am delighted that I can now offer some happy news.

For those in the green community, expansive solar facilities are always a sight for sore eyes. But the detailed briefing about the exceptional progress made during the past year in the Israeli army’s energy transition was positively exhilarating. It turns out that Israel can learn a thing or two from its military commanders:

In 2018 the IDF created an “Energy Efficiency Branch” which soon thereafter published a multi-year plan to renewably produce the military’s energy and to reduce its electricity consumption.  Since then, there has been a flurry of activity involving solar panels, substituting dirty, diesel fuel with natural gas, replacing wasteful electrical appliances (especially air conditioners) with more efficient modes while exchanging old, wasteful water boiler infrastructures and lighting systems.

In terms of renewables, the numbers speak for themselves:  During the past few months, Israel finally eked over the 10 percent threshold for renewable electricity sources – two years later than when we promised we’d be there at the 2015 UN Paris Climate Conference. Nothing to write home about.

By way of contrast, Israeli army is already producing over 25 percent of its electricity from solar panels. And it’s not looking back.  IDF energy experts project that if they are allowed to implement their present blueprint, by 2030 the army will be 100% powered by renewable electricity – even as the State of Israel hopes that it might reach 30% by that time.   This number is particularly impressive given the fact that the military has to work with a somewhat recalcitrant and inflexible Israel Electric Company, whose electricity grid is woefully inadequate to accommodate many dispersed, renewable sources, given the steady rise in the country’s electricity consumption. Especially in the Negev, often more electricity is produced by the army than the national grid can accommodate.

Progress in improving the army’s energy efficiency may be even more impressive. Even though the scope of military activities is constantly expanding and army bases are moving from the temperate center of the country to the sunny south, the IDF’s electricity consumption is decided down:

Progress in renewables and energy efficiency was catalyzed through economic incentives: an internal, military, revolving fund provides grants to bases to improve their energy efficiency infrastructure and technologies. The fund’s criteria are almost ridiculously stringent. Military bases must be able to pay off the investment within four years!  In the case of solar panels, a special exception was made and grants can be paid back in seven.  (At present there is a call to increase the return rate to nine years for energy storage infrastructure.)  But thus far, with so much “low hanging, energy alternatives” waiting to be picked, the army has already been paid back 600 million shekels from targeted loans, as well as saved an additional 400 million shekels due to long-term reduced electricity expenses.

As the people’s army, the IDF has always been asked to take on challenges that go far beyond the conventional mandate of a military force. We have seen the army help tens of thousands of soldiers from disadvantaged backgrounds complete their high school education. The army provides special assistance and financial aid to children from indigent families.  New immigrants receive special Hebrew training and social work services.  Many soldiers who are not considered Jewish Halachically have availed themselves of special conversion courses to Judaism.

During the Covid crisis, the Israeli army entered a new chapter of engagement in providing a range of health services – from epidemiological tracing of infection trails to delivering food to families isolated during periods of lockdown. I would like to hope that a new era of military leadership by example is beginning in the area of environmental and climate friendly management.

Of course the military enjoys certain advantages: It has plenty of space on its bases; it has  technical competence; and it is hierarchical, with officers in the field usually obeying orders from their superiors.  Nonetheless, when it comes to combatting the climate crisis, the civilian sector can certainly learn much from the military: trend is not destiny; and if we will it — Israel can enjoy a sustainable dream.