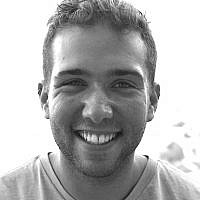 The Blogs
Harris Engelmann
Apply for a Blog
Please note that the posts on The Blogs are contributed by third parties. The opinions, facts and any media content in them are presented solely by the authors, and neither The Times of Israel nor its partners assume any responsibility for them. Please contact us in case of abuse. In case of abuse,
Report this post.

On  December 4th, 2014, the Knesset voted to dissolve itself and set early elections. Since then, one hundred and seventy seven days have passed. On March 17th, 77 days ago, elections were held and a new Knesset was chosen to serve as the law-making body that represents the interests of the Israeli population. Since the elections, only two bills have passed the Knesset – one to confirm the governing coalition, and one to delay a vote on the budget for the next fiscal year until the fall. The Knesset committees – the bodies that are nominally responsible for crafting legislation – are only supposed to resume functioning this Wednesday, June 3rd. In other words, for nearly six months, the Israeli people have had no real democratic representation, as the body designed to be their representative has remained almost entirely out of commission.

This notably long time that Israel has gone without a functioning Knesset is just one of a series of serious occurrences that betray a much larger problem – a rapidly-growing gap between the people and their elected officials. In other words, Israel’s current politics have created a democratic deficit. According to the results of the most recent Israeli Democracy Index, which was published by the Israeli Democratic Institute at the end of 2014, 75% of Israelis polled believe that they and the friends have little to no chance to affect policy, 62% of Israelis agree that “politicians don’t care about the man in the street,” and only 36% place trust in the Knesset to be an institution that represents them. Strikingly, Israel ranked 18th out of 19 western nations in an OECD ranking on civic engagement, an indicator that measures “citizens’ level of trust in the Government and perception of their [ability] to influence the legislative process.”

How, exactly, did this happen? The Social Guard, an Israeli NGO dedicated to promoting socio-economic legislation and increasing citizens’ participation in the democratic process, published a summary report of the 19th Knesset that gives great insight into the weakening of the Knesset. The body intended to be the direct linkage between the citizens and the state has instead become little more than a rubber-stamp for governmental decrees. A little-known and almost entirely non-transparent body known as the Governmental Committee for Legislative Affairs, now holds almost all meaningful control over legislation – during the course of 19th Knesset, 100% of all legislation passed only after approval from this committee, and it was routinely used to sift out unsavory legislation and to decide which bills would receive mandatory support from the coalition.

That’s where the gap between the people and those representing them manifests– Knesset members are being forced or are willingly playing a game of political favor trading between member parties of the coalition, and the legislation process has been almost entirely removed from the hands of individual representatives. Indeed, the previous governing coalition fell in large part because Yair Lapid, head of Yesh Atid, refused to withdraw his signature 0% VAT on Housing Bill and to support Prime Minister Bibi Netanyahu’s Jewish State Nationality Bill – Lapid’s refusal to play the game ultimately that his party is now entirely removed from any meaningful role to craft legislation. The consequence of coalition wheeling-and-dealing and the concentration of legislative control in the hands of a few select government members is that the Knesset has all but lost its raison d’etre. Without the power to create legislation, the Knesset has lost its main purpose and the people have no real, elected representative body.

The widening democratic deficit is the result of a combination of governmental coalitions and political parties more interested in self-preservation than in democratic governance. It is further compounded by a lack of meaningful participation by Israel’s citizens in government decision-making processes. This deficit can be reduced only if trust and respect between the people and their elected officials is renewed – by both sides.

About the Author
Born and raised outside of Wilmington, Delaware, Harris Engelmann currently resides in the Florentin neighborhood of southern Tel Aviv and serves as the Knesset Social Guard's Outreach and Volunteer Coordinator as part of his participation in the NIF/Shatil Social Justice Fellowship.
Related Topics
Related Posts
Comments