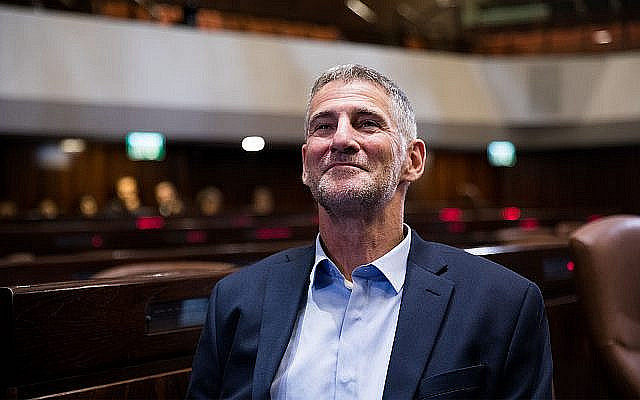 MK Yair Golan of the Democratic Camp party during a tour of the Knesset, September 25, 2019. (Yonatan Sindel/Flash90)

The Israeli left has a problem more fundamental even than its everyday political incompetence.

The left cannot win a majority in Israel without the backing of parties representing Israel’s Arab minority. This has not happened since the 1970s, just as the right needs the religious Jewish parties.

But what has emerged as the left’s defining argument – other than opposition to Benjamin Netanyahu – is a bad fit with this dependence on the country’s Arabs. That is the argument stating that unless Israel gives up the occupied territories it will saddle itself with too many Arabs for something called the Jewish state. This surfeit of Arabs includes the 2 million Israeli Arab citizens whom the left needs to flock to the polls on its behalf every election day. Awkward.

Not that it’s wrong: the Holy Land’s 14 million people are equally divided between Jews and Arabs and only partition will save Zionism. The electorate remains largely Jewish because the West Bankers Israel has ruled for 53 years cannot vote for Israel’s government. The existence of the Palestinian Authority autonomy government (set up over the objections of the right) make this situation plausible, but barely – because Israel retains ultimate control. It is a house of cards.

Logical though the demographic argument may be, it is a nationalistic enough approach to discompose genuine leftists who yearn for universal justice and human progress and that type of thing. So the left has rebranded itself as the “center-left.” The handful of idealists tag along, feeling superior and muttering their disdain.

This center-left is backed by most informed Zionists who are not religious enough to rely on divine miracles to reshuffle the deck. Among their number you will find the overwhelming majority of major security figures including those from the Shin Bet security service whose main task is to keep the Palestinians in check. They know how futile the endeavor is – how unviable the status quo is as a strategic plan.

So you find supporters of this center left assailing rightists as either non-democrats, non-Zionists or imbeciles (in my experience, the first explanation is the most common).

This is the argument presented this week in something of a manifesto  by retired Gen. Yair Golan, who was once the deputy head of the military, now finds himself a lawmaker from the leftist Meretz party, and doubtless aims far higher. In the cesspool of 21st century politics, he passes as an intellect.

Addressing the Israeli right, this “leftist” wrote in Haaretz: “You constitute a threat to the entire Zionist project. You undermine the most basic principle of Zionism: Israel is the national home of the Jewish people…. You are endangering this home.”

What’s an Israeli Arab to make of this? Should Israeli Arabs fret over the Jewish majority? The notion is less absurd than may appear: there are certainly some among them who contemplate the poverty, violence and despotism in the region and conclude the Zionists have built something better, which benefits them as well. But no – one cannot expect Israeli Arabs to be Zionists, by and large.

If anything, Israeli Arabs might eventually decide their most logical course is to vote in large numbers for the often racist yet clueless Israeli right in order to bring about a binational state. Eventually the West Bankers will demand citizenship, and the world will force Israel to comply, and that will be that for Theodore Herzl’s little Judenstadt.

A version of this is happening right now in the recent weeks’ flirtation between Mansour Abbas, who heads a four-seat Islamist faction within the 15-seat Joint Arab List, and Netanyahu. Abbas has cooperated with the right on all kinds of little machinations and hints at breaking up the Joint List and running on his own. It’s not inconceivable that he aligns in the end with the right (or at least refuses to back the center-left, as the Joint List formally did, after that March election).

It’s logical in a way. Abbas is a theocrat who has spoken out in favor of conversion therapy for gays. He has far more in common with the Jewish fanatics in the religious factions of the right than with the communists and secularists who dominate the Joint List, and whose worldwide home is the left. I doubt he cares much about saving the Zionist project.

In the background is Arab outrage over the decision by center-left leader Benny Gantz, after winning the March election, to ally with Netanyahu rather than form his own government backed by the Joint List. Gantz was constrained by a few nationalists in his ranks, but the move projected weakness to the Jews, was perceived as betrayal by the Arabs, and may prove impossible to bounce back from.

Things were not always this bleak. When the peace process started in the 1990s, demographics were not the only factor. Back then, considerable numbers of Israelis actually spoke of justice for the Palestinians. Around 20 years ago every poll showed about two-thirds of Jewish Israelis favoring a Palestinian state in most of the West Bank and Gaza.

First, obviously, the Second Intifada. There are competing narratives but the one that has stuck among most Jewish Israelis is that Israel offered the Palestinians a state on about 95% of the land they sought and were rewarded with four years of buses, cafes and malls blowing up. That the offer was improved upon by Ehud Olmert in 2008 and still not grabbed has basically destroyed the ideological “peace camp” in Israel. The only argument left was practical, and essentially unilateral.

Then, somewhat less obviously, Jewish Israel became more religious, largely through birthrates but also for other reasons. It may surprise some who equate piety with decency, but in Israel religiosity and discomfort with injustice do not correlate.

The third reason is either the least or most obvious, depending upon your wider point of view: in the cacophony of modern society, democracy has started to go to the dogs. The global youth are cynical about it; the hoi polloi see conspiracies everywhere; electorates go astray as a matter of course, driving “elites” to despair; now the US Republicans are trying to cancel a presidential election they lost and seem to feel no shame.

The West Bank is strategic highland ideal for launching rockets on Israel’s crowded coastline; its sacred tombs send religious hearts aflutter; any settlers who would need to be uprooted would raise hell. Why deal with the risks and pain of a pullout? Because the occupation isn’t democratic?

The West Bank is worth a lot. What’s the worth of this democracy you care so much about?