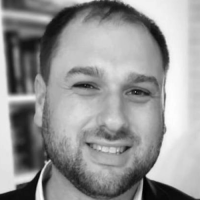 The Blogs
Leron Bernstein
Apply for a Blog
Advertisement
Please note that the posts on The Blogs are contributed by third parties. The opinions, facts and any media content in them are presented solely by the authors, and neither The Times of Israel nor its partners assume any responsibility for them. Please contact us in case of abuse. In case of abuse,
Report this post. 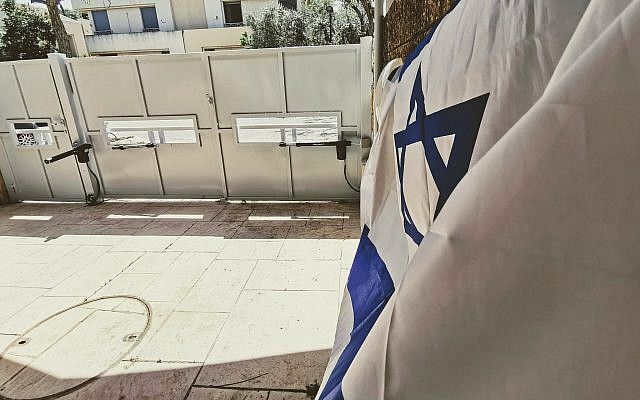 Flag received at airport upon making aliyah, flying behind closed gate in driveway, March 2020. Photograph by the author.

Setting foot on holy soil just three short months ago, we have had an uplifting Aliyah journey so far. Overcoming the mountain of bureaucracy and lifestyle change in the beginning can be quite overwhelming, but with good support from family and friends, and a strong commitment to focusing on seeing the blessing in the challenge, we managed to maintain a positive momentum, even through the inevitably tough moments along the way.

To peak our ‘homecoming’, I set myself a goal – to run in my first official race – the 10 kilometre route of the Jerusalem Marathon, set for Friday 20 March 2020. I have no running experience whatsoever, but I was inspired by the phenomenal thought of running with Am Yisrael, at the centre of the world, at such a thrilling time in our nation’s history. One of the leaders of our new home community in Tel Mond is also an accomplished runner and he gladly agreed to play, ‘running coach’, and map out my journey from ‘zero to ten’. With six weeks to go and a plan in place, I fell in love with the running and was well on my way.

While enjoying the music as I ran and finding my new rhythm, I was inspired by the constant refrain of Rebbe Nachman in my head – “L’chol makom she’ani holeich, ani holeich l’Eretz Yisrael”. “To every place that I go, I am going to Eretz Yisrael”. This is a line that has directed me from my early youth movement days. At its depth, it proclaims that, irrespective of if you’re moving forwards, backwards or sideways, it is all part of Hashem’s  master plan and therefore, you are always moving ahead – every step serving as another movement in Hashem’s grand marathon of human destiny. And now, after a personal journey of many hills and valleys, I was finally here with my family and actually notching up thousands of physical steps on this Holy Ground – it felt quite prophetic.

Up until that Thursday evening, I managed to get in a few more runs and they felt life-saving. And then, the country went into a stringent lockdown – no more leaving the house for any non-essentials. And so it was, on the exact day that I was going to run my first official race – in Yerushalayim, Ir HaKodesh, as a new citizen of Israel – it was now a state order that I should make every effort to not take even one step out of my house.

What is the way forward? How are we going to cope? What does the future hold? The only thing that is clear is that we do not know what tomorrow looks like and for how long this will continue.  However, what we do know, absolutely, is that Hashem is in charge, as He always was and always will be.

In our constrained living spaces, we are now called upon to think bigger. If our Service of Hashem was only directed by the specific Mitzvot, we have to now tap into the underlying directive of ‘Ratzon Hashem’ – ‘Divine Will’. Our focus has to shift to serving Hashem as the ‘Creator of the World’ – not only the ‘Commander of the Word’.

I am moving forward now by staying put. And, in being present with myself and my family, I don’t regret eating, talking and dancing with them like never before. My kids are actually enjoying my jokes. It could be because I’ve suddenly developed a genuine sense of humour – but more likely because they’re starved for choice. Whatever the reason, we’ve never laughed together as a family as much as we have over the past week and I’m grateful to Hashem for that.

So, two weeks prior, I ran my first continuous five kilometres in twenty-eight minutes in Tel Mond (a week before that, I had no idea that this was half-decent) and today I am fulfilling Ratzon Hashem – realising the dream of modern Jewish Destiny – by listening to the Prime Minister and staying in my home – not taking even one step out of it.

The spiritual significance of this, is that every one of us who is able to encounter the Divine Will in not leaving our homes, in not davening in a Minyan, in not singing Mussaf Kedusha with the community, in not having a l’chaim with a friend – is taking huge strides in the marathon of Ratzon Hashem and notching up countless steps in Rebbe Nachman’s race of “L’chol makom she’ani holeich, ani holeich l’Eretz Yisrael”. Perhaps not geographically ‘to Eretz Yisrael’ – with inbound flights cancelled as well, but fundamentally ‘for Eretz Yisrael’ – wherever we are in the world.

And so, I don’t have any pictures of a marathon medallion to show, but I do have some new special memories with my family and a shiny new bank of resilience. I’m not feeling the exhilarating rush of air against my face, but I am invigorated by having the newfound presence to appreciate the embrace of my wife and children – the best running group I could wish for in the marathon of life.

The priority has now shifted to doing all that we can to stay safe and healthy in our homes – protecting ourselves and those around us. Within that space, we are called upon to valiantly celebrate every step we do take – especially the ones that now look very different and unexpected.

May a solution to this terrible predicament be found soon. I also look so forward to getting back to running on the more familiar roads of my Homeland. In the meanwhile, there is tremendous meaning to be found in the physical steps we now don’t take in a marathon that has immense national and global significance.

About the Author
Leron Bernstein lives in Israel, working in Hi-Tech, as an inspired member of the Start Up Nation workforce. He made Aliyah in 2020, after serving as a communal leader in formal and informal education in South Africa, for over a decade. He feels blessed to be living in our eternal Homeland with his precious family, seeking out the extraordinary patterns in everyday moments.
Related Topics
Related Posts
Leron Bernstein
Comments