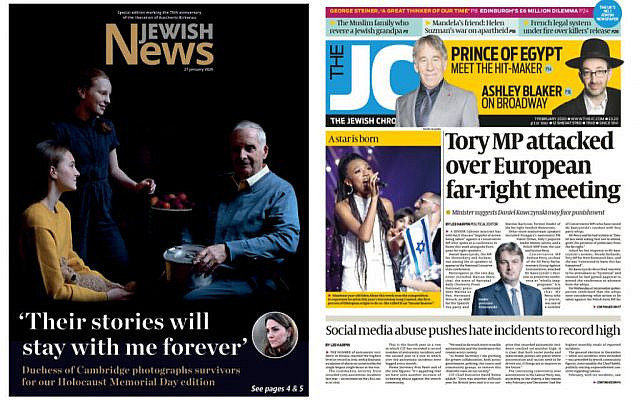 The pre-Pesach bombshell that the Jewish Chronicle and Jewish News, the weekly newspapers of Anglo-Jewry published in London, are to enter into liquidation is not just very sad – it threatens the future of this small and shrinking community, now officially numbered at less than 300,000 people.
Newspaper publishing has been decimated by the web, particularly Google and Facebook, as the vast bulk of advertising revenue, the lifeblood of media for two centuries, has migrated to the digital behemoths who operate without regulation and feed like leeches on the work of real journalism. In such conditions, small niche publications must be extra smart and nimble to survive.
Even before the digital onslaught, the JC was slowly dying. It was already mortally wounded in 1990 when my research showed that its circulation (then around 50,000) was declining much faster than the Jewish population because the generation born in the 1960s had stopped buying it and only read it at their parents’ homes on Friday night. The decline accelerated during the 1990s, largely due to a misguided editorial policy that alienated many of its dwindling readership and failed to attract new ones. The paper also mismanaged and then ceased publication of its once highly profitable quarterly colour magazine at a time when glossy magazines were selling in the largest numbers in history.
This gave us the market openings to launch the monthly New Moon magazine in 1990 and re-launch the bi-weekly Shalom as the London Jewish News in 1997. I warned the JC management of these structural weaknesses when they invited me to interview for the editorship in 2005.
So when the digital advertising tsunami hit, the JC was already weakened. Despite heroic efforts at greater efficiency and refinancing, and a dynamic, campaigning and more in-touch editorial policy under Stephen Pollard, the JC couldn’t withstand the dramatic drop in circulation and advertising revenue without a major cash rescue package in 2019. The devastation to advertising revenue from the coronavirus crisis at Pesach, the biggest money-earning period of the year, exceeded even the most pessimistic forecasts.
Even the leaner model that had sustained the JN through these difficult times crashed in the face of the lockdown.
Without these publications, Jews in Britain will “all feel less connected,” says JN editor Richard Ferrer, who recently oversaw a back-end operation merger with the JC that should have preserved both publications.
It goes further than that. Without a weekly publication, the community is in real peril. The number of active members of the Jewish community is far less than the 284,000 cited by the Board of Deputies. Such a small community needs a publication of some kind in order to survive beyond the active synagogue-goers and charity-givers so that those synagogues, charities and other vital community services can themselves operate.
It is essential for the future of the Anglo-Jewish community that the JC/JN be maintained in some form — both online and in print. A mass-media vehicle is the only way to maintain community contact, publicise news and information, and help charitable, cultural and other initiatives to flourish. A print edition is vital because so many people read it over Shabbat, and it has more lasting impact. The free circulation model based on advertising revenue pioneered by Shalom/London Jewish News is probably now outdated. As many niche publications have shown, subscription models work when the publications adequately cater to their readership.
In the absence of the JC/JN being revived, there is a real concern that fringe players will step into the vacuum, creating a bizarre situation where a moderate, centreist community is represented online by political or religious extremists funded by troublemakers outside the community.
The amount of money required to fund an efficient operation isn’t that great, and would be repaid many times over by the benefits it brings the community. Combined with events and other revenue-raising activities, it could be profitable.
I wish everyone involved the best of luck.
About the Author
Matthew Kalman, a former Middle East correspondent for international media, is chief content officer for OurCrowd, the world's largest equity crowdfunding platform and Israel's most active high-tech investor.
Related Topics
Related Posts
Comments