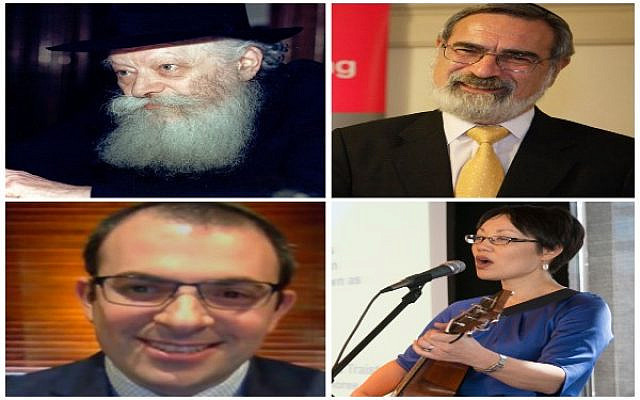 The Jerusalem Post published, in honor of Rosh Hashana, a list of what they consider to be the 50 most influential Jewish personalities. Granting the subjectivity of the process, the need to balance different sectors of society and different parts of the Jewish world and gender balances, it is still a list worth noting. After all, it does represent the best efforts of what one imagines is a team of 5-10 able writers who spent a month to two reviewing several hundred candidates. I do not wish to analyze the list in detail for its strengths and faults. I would like to share a strong impact the list had on me and the thought process it led to.. This thought process is especially relevant to this time of year, a time of self-reckoning and introspection.

There are two interrelated observations I made in reviewing the list. The first is the near absence of any religious figure. This is quite striking when considering the Jewish people. The compilers probably suffer from anti-Haredi bias, as no Haredi figure is included in a list of prominent influencers. Or perhaps they only considered influence beyond the sphere of native Judaism as relevant. Be that as it may, only two rabbis are mentioned on the list. One, Rabbi Ari Lamm, is noted for a successful podcast, rather than for his rabbinic abilities. The other, Rabbi Angela Buchdahl, is interesting for her rich life story and the measure of influence she exercises. It is quite striking that this is all that Judaism or religion 2022 amounts to in this collective exercise.

Looking further, I am struck by the lack of mention of any thinker, philosopher or even prominent writer. Which leads to my second observation – being prominent, in this account, is about doing. Jewish influencers and prominent individuals are those who do something in the world, something that others are likely to see and take note of.

I imagine the compilers of this list are not alone in viewing Jewish excellence in terms of outward actions. This allows us to take pride in the achievements of scientists and heads of state, as they do. But what does this say about us and our understanding of Judaism and the Jewish people? My obvious response was to think whom I might include in an alternative list of prominent Jewish figures. It is here that the problem revealed itself as far more significant than questioning the choices of the team of journalists who compiled the list.

If we speak in terms of religious communities, there are of course many religious leaders with broad reach in their communities. Given Israeli politics, figures such as the Rebbes of Gur and Belz, or Rabbi Gershon Edelstein, are prominent and have influence. The same would obviously be true of heads of other Jewish denominations. But, then again, we would still be recognizing their impact in the “real” world, in the world of politics, community management, and Jewish organizational realities. Yet, deep in me lies the recognition, fruit of what I consider to be a good education, that authentic Jewish contribution lies in ideas, in having a message, not simply in being successful in a wide array of activities. Which set me thinking: What message do any of the heads of large religious organizations really carry for the Jewish world today? What teaching can they deliver to the world at large? Gradually, the recognition set it. We do not have a message. Certainly, Judaism lives and upholds great ideals: God’s kingdom, Tikkun Olam, Covenant, service to humanity and more. Yet, its leadership is not concerned with the message, with restating it, with finding new and relevant ideals. Its concerns are community survival, membership and demographics, internal Jewish politics, protection against perceived dangers -physical or spiritual, and issues of gender and sexual relations. Attention is focused in practical, political, community-oriented ways. Guiding ideals are just that. But they do not require further thought, investigation, investment, deepening. It seems we have become a people that have nothing fresh to say, either to ourselves or to the world.

I ask myself: how many theologians are there who attempt a fresh statement of the meaning of Jewish life? I can count them on one hand and they are probably all my friends. How many spiritual leaders are there who can reach out beyond their narrow communities? Probably less than one hand’s worth. How many Jewish philosophers are there who have a fresh philosophical message, as distinct from a review of the history of Jewish thought? Not many. Or to take a different approach: when Ted talks began, they were about new and exciting ideas that have the potential to change the world. (This changed, and personal stories have taken over). If we had to do a Jewish Ted, and bring on stage all the Jews who really have new ideas to share as part of their Judaism, not as part of their ethnic identity, I doubt we could create a single Jewish Ted program.

The roots of the crisis are manifold. It is, I believe, at heart a crisis of God (I have explored this in my The Jewish Encounter with Hinduism). We have lost the sense of centrality of God. It is also a crisis of education. We do not educate to ideas. The pressing needs of survival push issues of ultimate meaning to the background. And, of course, it is a crisis of leadership, with Jewish leadership confined to smaller community structures, lacking vision for the whole.

We did have, even recently, alternative models. I consider the Rebbe of Lubavitch to represent an alternative model of leadership. I consider the late Rabbi Jonathan Sacks to have been a teacher who did have a message, for Jews and for the world. Looking around, I am hard-pressed to see who fills the void they have left behind. Knowledge, information and survival have replaced vision and purpose.

We can’t create giants of the spirit at will. But we can take stock of our situation. We can ask what our educational priorities are. We can pose the question of what our message is and how to keep it fresh. We can ask how far reaching our voice is and how expansive our teaching could become. If we ask these questions then we remain true to centuries of Jewish life where ideas, teachings and core messages were as important, if not more important, than excelling in the field of action. This, then, is an invitation to return: to ourselves, to our history and, underlying it all, to the God who furnishes us with fresh vision, generation after generation.

About the Author
Alon Goshen-Gottstein is the founder and director of the Elijah Interfaith Institute. He is acknowledged as one of the world’s leading figures in interreligious dialogue, specializing in bridging the theological and academic dimension with a variety of practical initiatives, especially involving world religious leadership.
Related Topics
Related Posts