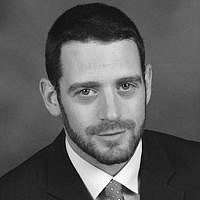 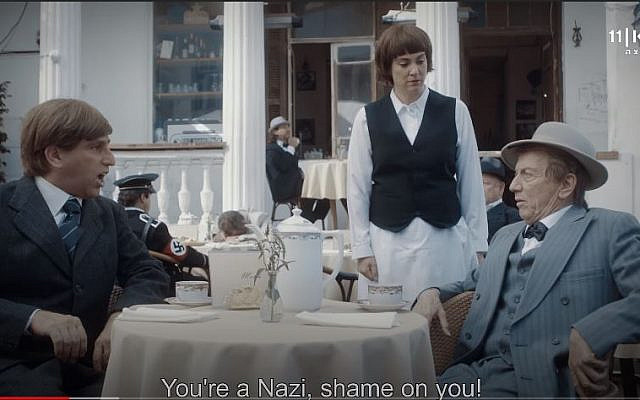 A scene from 'The Jews are Coming,' Season 3 (YouTube screenshot)

Hundreds of Israelis took to the streets this week to protest the satirical Israeli TV show “The Jews are Coming” — or “HaYehudim Baim” — calling it “blasphemous” for its humorous depiction of famous figures from the Bible and Jewish history. The demonstration came on the heels of calls by parliamentarians to open investigations into the show for harming “sensibilities of millions in Israel, Jews and non-Jews, religious and secular,” in the words of Shas MK Moshe Arbel. “It is appropriate that the serious damage to the religious feelings of the masses, funded by the Israeli public, cease,” he continued.

It seems that the protests and sympathetic journalists are starting to have some effect. Education Minister Yoav Gallant on Thursday ordered the ministry to remove clips of the show from its website.

As a religious and Zionist Jew, it is troubling to see members of my community and prominent political personalities so grossly misrepresent the essence of Israeli democracy, the program itself, and our shared religion they have taken it upon themselves to defend from television satire.

The utter inappropriateness of calls for investigations into artistic expression within a democracy is patently obvious to most Israelis. If freedom of speech means anything in this country, it must extend to creators and artists, who will sometimes say things that some Israelis object to. No segment of the public can demand that artists self-censor, if freedom of expression exists. That same freedom allows the protesters to legally gather and express their displeasure, misguided though they may be.

The extent to which the protesters totally misunderstand the show itself might be less obvious to some. Sympathetic writers and politicians — some of whom have not even seen the show, I’m sure — describe a mean-spirited program whose goal is to insult religious Jews and their faith.

Nothing could be further from the truth. First of all, “The Jews Are Coming” aims at much more than just biblical stories. It portrays characters from Jewish history in Israel and the Diaspora, key episodes in the pre-State era, and memorable, even painful, chapters in Israel’s history.  It comments on the giants, the stories, and national myths of the collective memory of Israeli Jews, religious and secular. The show is created entirely for the audience at which it takes aim. It is a real and enjoyable conversation within the family. Only those who are steeped in Tanach and Jewish history will appreciate the sophistication of the sketches; it is hard to imagine someone who is not both Jewish and Israeli gaining anything beyond a shallow understanding of most of the episodes.

This is not the nasty work of anti-religious secularists. The script and acting show a love for the details of the stories, the nuances of the characters, and yes, the humorous and even uncomfortable aspects of the tales our people has preserved through the generations.

What’s more, anyone who thinks the show is really about the biblical characters themselves  misses what makes it so popular. Through the vehicle of Jewish history, “The Jews Are Coming” makes profound statements about contemporary Israeli society and politics.  Does anything think the sketch about Deborah trying to prophesy to the people — only to have them grill her about her personal life and her choice not to have children — is about anything other than women in today’s workplaces in Israel? And when the strangers’ criticism turns to her failure to produce for the security of the state — “There’s the demographic threat, don’t forget.” “Right, the Jebusites and Girgashites are multiplying like rabbits.” — everyone knows who the Jebusites and Girgashites represent. The sketch about King David raising taxes so he could build a golden diving board from which to urinate on the adoring public — who are desperate to feel even a single drop — is a statement about Israel’s current leadership.

Through this method, the show is able to at times to make us laugh, at other times to make us uncomfortable as it forces us to confront the difficult episodes in Israel’s past. It was hard to watch the first “meeting” of the Ministry of Aliyah and Absorption, as the (extremely) Ashkenazi officials tried to figure out why the minister proposed bringing the Jews of North Africa to Israel, until one thought she finally understood the plan: “I actually think its a great idea…We will travel to Africa. We will bring all the Jews here in boats. And then we will let them work in the cotton fields.” Another official objects that its not their place to tell the Jews of Africa what to do once they arrive. “We’ll let their owners decide,” he offers proudly. The episode makes the viewer squirm, as it uses exaggeration to force him to reflect on the very real racism Mizrahi Jews faced when they arrived to Israel. “The Jews are Coming” returns to this issue repeatedly, and is able to speak to us in ways that only satire can.

And the show manages to poke Israeli Jews right in the eye as it deals with other important issues in a similar fashion. Jewish passersby who burn Maimonides’s landmark work The Guide for the Perplexed because it is a “blasphemous book” for proposing a synthesis of Greek and Jewish philosophy are obvious stand-ins for closed-minded segments of contemporary Israeli society (the ones who do things like calling for satirical TV shows to be investigated, let’s say). The useless and casually cruel Kohanim characters of the Second Temple are explicitly used to criticize the Israeli Rabbinate.

Some might assume that the show unfairly targets the Israeli Right, but it hits left-wing Israel just as hard. The sketch featuring Jews from the tribe of Dan who moved to the rural north and their tribesmen visiting from the center of the country mocks conversations we’ve all heard between secular Israelis from Tel Aviv and their friends who tried to get away from it all by fleeing to the Galilee. The national heroes of the Israeli left — including Ben-Gurion, Peres, and Rabin — are all fair game in the show.

“The Jews are Coming” even manages to elicit profound sadness. A sketch about Yaffa Yarkoni, a singer identified with the wars of Israel’s first decades, trying to sing children’s songs, but inevitably finding herself singing about death and bloodshed, drives home our inability to get beyond the traumas of our founding. Episodes about German Jews voting for Hitler because he is both a patriot and an author — and worst case, if he’s no good they can just replace him in four years — succeeds in both evoking the tragedy of the Jews of Europe and criticizing the careless attitude toward our own democracy today.

And of course, there is the deeply touching sketch about Druze Border Policeman Madhat Yousef, who slowly bled to death during a Palestinian attack on Joseph’s Tomb in October 2000, while the Israeli chain of command simply relied on the Palestinian Authority to evacuate him. The episode begins with the ghost of flamboyant and arrogant Joseph emerging and being his flamboyant and arrogant self. As Yousef begins to drift out of consciousness while he waits for his “brothers” from his company to come save him, Joseph’s softer side emerges. The ghost of Joseph — or is he just Yousef’s consciousness trying to tell him what he doesn’t want to see? — holds the dying soldier, and tries to give the naive Yousef a hard reality check about being abandoned by ones brothers. In the end, Yousef holds on to his heartbreakingly innocent belief that he will be saved by his Jewish comrades as he dies alone, his head resting on the mirage of a character who knows all too well what it is like to be betrayed by one’s own brothers.

This extremely sophisticated artistic treatment of a difficult episode in our recent past forces us to re-examine the IDF ethos of leaving no soldiers behind, and the blood pact between Jews and Druze in Israel.

Finally, the protesters’ objection to the show pointing out the flaws of biblical heroes flies in the face of the Jewish approach to the great figures of the Tanach. The Torah is quite explicit about the flaws of our forefathers. Abraham sent his own son off to die in the desert and was ready to kill his other son. Jacob deceived his own blind father and stole his brother’s blessings, then endangered his son Joseph by showing clear favoritism. Moses neglected to circumcise his son and later hit the rock, Aaron oversaw the building of the Golden Calf, and Miriam mocked Moses behind his back. David — among his myriad sins — joined the Philistines against his own people, murdered Saul’s sons, and sent a husband to his death to steal the man’s wife. We are not expected to see our heroes as flawless. Jewish tradition holds that there are only four figures in the Bible unblemished by sin — Benjamin son of Jacob, Amram father of Moses, Yishai father of David, and Kil’av son of David. These relatively minor characters are described in the Gemara by their relationship to their more consequential relatives to emphasize that in order to be a significant figure in the Jewish story, you must have the will and the capacity to sin. It is actually Christians who see their most important biblical characters as flawless and without sin.

If the Torah did not want us to discuss our forefathers’ human flaws, it simply would not have included them in the text.

“The Jews Are Coming” is an expression of love for our history and faith, and of concern for our state today. It does exactly what art is supposed to do — make us laugh, squirm, and cry. It leaves us uncomfortable, reflective, and sometimes even angry. It is Israeli Jews speaking to other Israeli Jews about our national traumas, our hopes, and our illusions.

I can think of some in my community who would do well to watch a few episodes.