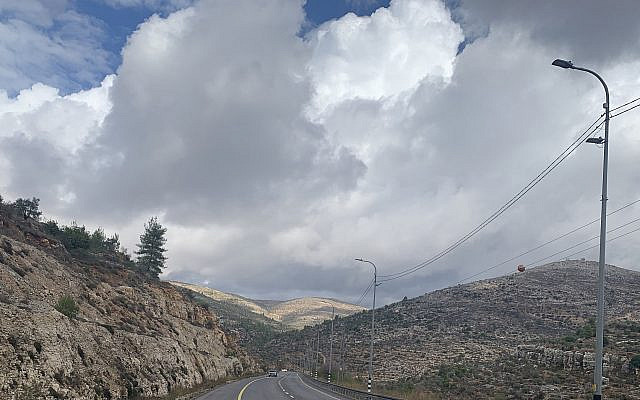 “Time to go!” the Waze notification read. It was getting late. My 8:40 Bris was about an hour’s drive away and I’m meticulous about being on time. I try to leave a 30 minute buffer so I can set up without feeling rushed. As I got into my car, it looked like I had plenty of time. Little did I know I was headed for the worst traffic jam I’d ever seen in Israel.

Just before I turned onto the highway, the first significant rainstorm of the season began. Rain is usually seen as a blessing in this region but not this time. The traffic was barely moving. My ETA started getting progressively later and my prep time considerably shorter. The rain felt like nails tapping on my windows, which just added to my anxiety.

Before I knew it Waze was predicting 9:00 AM. I didn’t know what to do. The Bris was going to be at least a half hour late. I kept having premonitions of guests tapping their feet and checking their watches while I inched along. All I could do was send the family my ETA and pray for a miracle. It never came.

In retrospect, the trip was somewhat spiritual. I had to just let go and recognize that this was completely out of my hands. I even pretended the arrival time read 8:00 AM just to keep calm. When I had finally reached the other side of the Pisgat Ze’ev neighborhood of Jerusalem (still only half way there), traffic began to ease up and the rain stopped. The clouds parted and the sun came out. I started to feel like everything was going to be all right.

When I finally arrived at the shul, everyone was inside. I assumed the parents would come running up and try to rush me along. This was their first child and that can add a whole layer of stress to the proceedings. But everyone was pleasantly calm, mulling around and chatting. They barely noticed my entrance. I quickly got organized and we began the ceremony.

In truth, this Bris was not the smoothest I’ve ever done and it wasn’t because I was rushed. As is known to happen, when I took off the baby’s diaper he began to cry and would not stop. He was completely disinterested in the sugar water I gave him and to top it off – rain delay. He peed so much it went through the pillow. Now it was clear that he wasn’t going to stop crying but the show had to go on.

As the event drew to a close, the baby finally calmed down when I picked him up and took him in my arms. We all breathed a sigh of relief. I handed him to his mother who put him in dry clothing and fed him.

During the feeding, I gave the father the post-care instructions. I assured him that his son had done great and the majority of his discomfort was due to his wet clothing. “I know,” the father replied. I coudln’t believe how calm he was. “You remember I’m a convert right?” He asked. I did recall him mentioning it when we spoke over the phone. He proceeded to recount that his parents were concerned about the Brit Milah. “Why don’t you wait until he’s older so he can decide for himself,” they had implored him. Even though it’s an all-too-common refrain these days it never gets easier to hear. “This is the one thing he doesn’t get to choose,” the father continued. “I don’t care what he does when he’s older but he doesn’t get to choose if he’s part of the convenant.”

I couldn’t agree more. Being part of our nation should not be a decision left up to our children. In some ways, that’s actually the message of Brit Milah. We don’t wait to start teaching the youth until they are adults. We begin imparting our values from the very first moments of life.

The father jested that if anyone knows firsthand the best age for a Bris it is he because his was when he converted as an adult. I’m always in awe of people who display this level of commitment to our faith. I wonder if I would have done the same if I had been in his position. But the story doesn’t end there. The father told me that this week is actually the anniversary of his Brit Milah. I couldn’t beleive it. For those who aren’t watching the calendar, that means he and his son share Parashat Vayera – the week of Avaraham Aveinu’s recovery from his Brit Milah. Hashem works in mysterious ways.