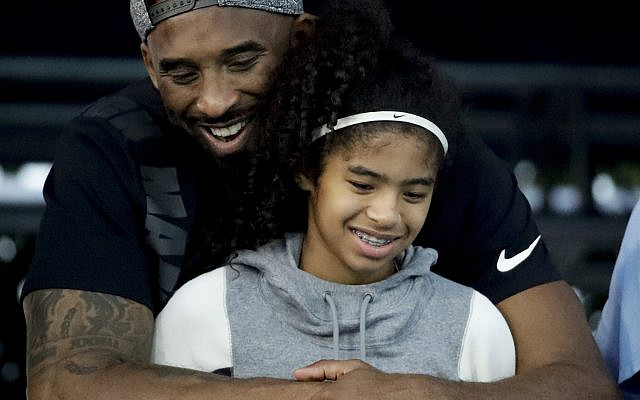 In this July 26, 2018 file photo former Los Angeles Laker Kobe Bryant and his daughter Gianna watch during the US national championships swimming meet in Irvine, Calif. Bryant, the 18-time NBA All-Star who won five championships and became one of the greatest basketball players of his generation during a 20-year career with the Los Angeles Lakers, died in a helicopter crash Sunday, Jan. 26, 2020. Gianna also died in the crash. She was 13. (AP Photo/Chris Carlson)

Many in the United States are still mourning the tragic death of Kobe Bryant, one of the top basketball players of all time. More than three million people have signed a petition to change the NBA logo to depict him. He was honored recently at the Grammy music awards and during the Super Bowl.

His death was tragic on so many different levels. He died suddenly at such a young age at a time when there was so much more for him to do.  He was just starting a new life post-basketball with so much promise.  And he leaves behind such a beautiful family who are absolutely devastated.  And he leaves behind countless players for whom he was such an inspiration for his tireless work ethic and commitment to excellence. But what about the elephant in the room? Where does the 2003 rape accusation fit into his legacy, if at all?

I did not feel comfortable raising this issue last week, during the first week of mourning over his death. Some articles were written about this incident and many of those who wrote articles were criticized for discussing this incident at this time when the pain is still so raw. When I consider how we remember and speak about the deceased according to Jewish tradition, I can understand the criticism to these articles.  During the shiva period, at least, we should mourn the person and only focus on his good qualities.  That’s what we do when we pay a shiva call.  We don’t qualify our praise of the one who passed away.  Our job is to comfort the mourners and give honor to the deceased.  The Shulchan Aruch (Yoreh Dei’ah 344:1) rules that we may exaggerate when we eulogize a mourner, but not too much, and we should mention all of his wonderful qualities.  Nowhere does the Shulchan Aruch rule that we may mention negative qualities at this time.  Now and certainly the first week after someone’s death are not appropriate times to reflect on negative qualities of the one who just passed away and certainly in this situation when someone was killed so suddenly in a tragic accident.

However, people have not only been mourning his loss.  Many have treated him as a national hero and they want to memorialize him as such.  If this is the case, then it is certainly appropriate to mention the allegations against him and consider that information to help guide us in our deliberations. It is true that someone is innocent until proven guilty in a court of law, but this is not the case when determining how to memorialize a public figure. The Gemara in Moed Kattan (17a) tells a story of how Rav Yehuda ostracized a Torah scholar because he was not pure and upright.  He was not similar to an angel.  The point of the Gemara is that to convict someone requires a much higher threshold of evidence than to not view someone as a hero.

We have Biblical precedent to not sugarcoat the lives of our heroes. In Tanach we read countless examples that point to shortcomings of our ancestors, such as Avraham Avinu (according to the Ramban, among others), Reuven, Yehuda and even King David.  When evaluating the life of someone who we view as a public figure, we evaluate all the evidence.  We do not want to ignore sinful behavior because then we convey that we condone such behavior.  If America wants to consider Kobe Bryant as a national hero, they need to fairly evaluate all the evidence.

Unfortunately, this is not the only instance when many people are conflicted between the tremendous good that individuals did in their lives and one or more instances of sinful and possibly violent behavior.  Do we honor such a person?  Do we say that all the good that the person contributed to society far outweighs the bad or alleged bad behaviors, and therefore we can still view such people as heroes?  What do we do with the shocking documents that were released this past year alleging that Martin Luther King Jr. may have been present in a hotel room when a friend raped a woman, even alleging that Dr. King encouraged the perpetrator?  What about the accusations of sexual misconduct made against Reb Shlomo Carlebach?  Much has been written about whether these claims are substantiated or baseless.  Perhaps the fact is that at this point, Americans celebrate Martin Luther King Day and Carlebach tunes and stories are so enmeshed in Jewish culture, it’s hard to turn back the clock.  Perhaps those who believe this new evidence against Dr. King celebrate Martin Luther King Jr. Day simply as a time to recommit ourselves to racial equality and those of us who continue to sing Carlebach songs distinguish between the tunes which are spiritually inspiring and the man who created those tunes.

But now America has to decide what to do about Kobe. Going forward, how do we deal with this man who was a positive force in so many ways, but also had a history that may have been complicated and so terribly flawed. Knowing now about the 2003 incident, Americans must decide whether the evidence is compelling enough to preclude memorializing him as a national hero.

I wonder if those who do view Kobe as a national hero simply believe after considering the evidence that the case against him was completely baseless.  Alternatively, do they believe that even if he acted improperly in this case, one act of poor judgment should not discount all the amazing work that he did during his life and that his impact on and contributions to society far outweigh this one bad act?  The case could be made that those who take this approach would find precedent in how we treat King David.  He sinned, and yet he is certainly considered a Jewish hero.  His Psalms are part of our Biblical canon and we recite them each and every day as part of our prayer service.  Maybe many good deeds or many good acts can outweigh one or two sins, even if those sins are very serious?

To this argument, I will say that I think many of us who study Tanach have difficulty with the story of King David and how we can reconcile what seems to be an individual who committed a few very serious sins with someone who is viewed as one of our greatest Jewish leaders.  As God-fearing Jews, we approach this story with an assumption, that indeed God forgave King David, and we try to reconcile that fact with the fact that he committed these serious sins.  We have faith that God knew what He was doing when He forgave King David and we try to minimize King David’s sins and/or point to the fact that his repentance was complete, sincere and accepted.  In other words, if God Himself had not forgiven King David and given him status as a hero, we’re not so sure that we would have.  But since God did accept King David’s repentance and did treat him as a Jewish hero, then so can we and so should we.

However, I don’t know if we can say the same thing for Kobe Bryant.  No voice is descending from Heaven telling us whether Kobe repented if he indeed committed the rape of which he is accused. Therefore, to all those who want to memorialize him as a national hero, I repeat my question. Do they honestly believe that the 2003 allegation of rape was baseless and without merit, or do they simply believe that maybe he did it, but he repented and he did so many other wonderful things in his life that outweigh this one mistake? If it’s the latter, then perhaps we need to re-evaluate our priorities.