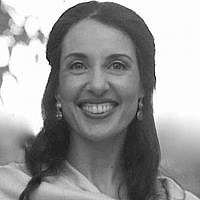 The Blogs
Elina Naseck
Apply for a Blog
Advertisement
Please note that the posts on The Blogs are contributed by third parties. The opinions, facts and any media content in them are presented solely by the authors, and neither The Times of Israel nor its partners assume any responsibility for them. Please contact us in case of abuse. In case of abuse,
Report this post.

Life is full of paradox. I learned all about paradox at the Hebrew Academy of San Francisco, an experimental school which comprised of secular Soviet Jews who knew nothing about Judaism and Orthodox rabbis who proselytized Judaism with their every breath.

My class, in particular, had some kind of putrid aversion to anything religious. In Torah classes, we would listen to our Walkmans, pass notes and play pranks on the teachers, especially the substitutes. During “Tefillah,” we would hide our Judy Blume books inside the prayer books. Under our long skirts, we wore micro-minis. We painted our lips while the rabbis tried to teach us the holy words of the Tzaddikim.  Each year, I begged my parents to take me out of that school. Each year, my plea was denied. Year in and year out, I would sit in class daydreaming, while the rabbis barraged us with holy words of Torah.  The rabbi who was there through it all was Rabbi Rindenow.

When I heard about the passing of Shlomo Rindenow z”l, Rabbi Rindenow’s son, everything inside of me was shaken, trembling. I never knew how strongly I felt connected to this man, this rabbi, my teacher. Sure, I saw him five days a week for a decade. Sure, he twirled in circles with my father at Purim parties. Sure, he was the rabbi who “bat mitzvah”ed our classes. Sure, he ripped food out of our hands unless we said a bracha. That was the kind of rabbi he was, an unconditional one. To me, these were seemingly superficial instances. But on the day of his son’s death, what I felt in my depths was indescribable.  In the crevices of my soul, I felt such a deep love, loyalty and admiration for this man and for his family.  I felt a loss as if it were my own, somehow ripped from my entwined heart.

It was in those moments that I saw how he poured out his heart to us Soviet Jews who knew nothing about Judaism, nor cared. It was in those moments that I felt how much unceasing devotion and dedication this man gave to us through his cause and his G-d.  Every minuscule and significant action, gesture, and wisdom this man shared with his students flooded through me. How ungrateful I was then.  How grateful I was now.

And maybe, just maybe, while I was daydreaming, his words seeped beyond my conscious mind, into the very essence of my soul.  After all, I was living in Israel. I was living a Jewish life. Maybe my life’s dream of making aliyah to the Holy Land came from this rabbi.  Not maybe, but certainly.  When I saw how he instilled the love of the Land of Israel and Klal Israel into every one of his children, I understood that this man was the reason I was able to stand upon the holy earth where his son would be buried and mourn with him, his family and the Jewish nation.

My eyes were closed. I could feel the blazing sun upon my face. I knew there were hundreds of soldiers around me and hundreds more civilians, friends, neighbors, students, and community. The crowd was still with silence. The only sound one could hear was the tears making their dents upon the Land. The speeches began.“Our baby.” “Our little brother.” “Our love.” The sons and daughters of the Rindenow family were describing Shlomo, their beloved Shlomo, may he rest in eternal peace. “Loyal. Majestic. Committed. Happy. Filled with Life. Always with a Smile. Responsible. Always calling the family. Always helping another. Accepting the other for who they are. The one with the solutions. The one with the answers. The one who fixed everything. The inventive one. The wise one. The one we all looked up to.”  That is the Shlomo who was taken from the Rindenow family and from the people of Israel last week.

Why did this happen to this beautiful soul? To this remarkable family who has done so much for so many?  What kind of injustice is this?  There is absolutely no reason for a precious soul like Shlomo’s to leave our world. But what did I know about such matters? What vantage point did I have from my speck upon the earth?  I thought about all that he could have become. I thought about all that he had already been in his short time on this planet. Then it occurred to me that maybe, just maybe, Shlomo is needed somewhere else. “By the seat of Moshe Rabbeinu,” as someone said in a eulogy. Surely his love for the land of Israel, for the Jewish people, for all of humanity and especially for his family will continue to live in every spark of anything he has ever touched.  Shlomo left us with a knowing that his soul had a higher purpose. Shlomo’s place was above and beyond this world.

In the moment when it was time for Rabbi Mordechai Rindenow to recite the Kaddish, the entire sky thundered with jets flying from every direction, but no jet can silence a father’s shattered heart. The airplanes were so loud. I thought that Rabbi Rindenow would wait until they passed, but how could he wait? His son lay there lifeless. How could he wait one more breath? He reached deep into his soul to recite those words, bellowing the words that he probably recited thousands of times in his life, never expecting to recite them like this. Not in the weakness of his pain and in the strength of his convictions.

“Yitgadal V Yitkadash,” the piercing of a father’s voice opening the Heavens.

The planes were atrociously loud. His pain was louder.  The planes could wipe out nations, but his heart’s weeping silenced them.

Shlomo died from a man-made device. It is true that man-made devices have the power to destroy. But there is something man is made of that overpowers anything he can ever make. That is the love that resides in the depths of Shlomo’s parents’ hearts. That is the adoration and longing of his siblings to see his smile once more. That is the selfless courage that Shlomo displayed through the many acts of his life, including his very last one. That is the faith that a family has in G-d when their most precious gift is stolen from them. That is everything that is silent and invisible.  Perhaps that was Shlomo’s greatest message to us.  Embrace the invisible. Serenade the silence.

Lo Aleinu, but Aleinu it came to be. I cannot reverse time.  I have no control of circumstance or destiny. None of us do.  But as Viktor Frankl said, I can “rescue the past into the present as a future mission.”  I can do something. Shlomo smiled a lot. I can smile more. Shlomo called his family all the time. I could call more. Shlomo encouraged others to follow their bliss. I can take his example and encourage those around me.  And every time I do this, he is alive.

On our way to the funeral, my husband and I bought a set of Zohar books in Shlomo’s honor. Every time we read them, we will dedicate the learning to his neshama’s aliyah.  Zohar means radiance. Perhaps only Shlomo’s light could carry us through this dreadful time of darkness. Shlomo, I wish that you could show us this radiance in living form. I really do. We were not lucky to know you while you were alive, but we feel that we will know you from another realm: an eternal realm, a heavenly realm, a radiant realm. May your memory always be a blessing and may you infiltrate the Heavens with your light.

About the Author
Elina is a writer, life coach, and world voyager. She is a new Olah from San Francisco, living in Tzfat, with her husband, Mordechai David. She is currently writing a book about her spiritual journeys through India, Poland, and Israel. She muses about life, love and the pursuit of the Shekhinah. She studies Kabbalah in the mystical city of Tzfat and schemes of all kinds of ways she will make an impact on Israeli society. Elina and her husband, Mordechai David, are in the process of building a meditation center in northern Israel. You can connect with her at www.elinanaseck.com.
Related Topics
Related Posts
Elina Naseck
Comments