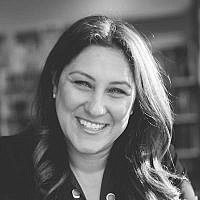 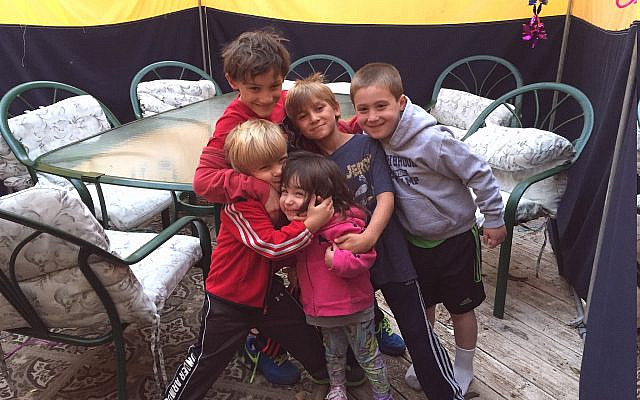 Growing up in suburban New Jersey, I was certainly not the most or the least observant Jewish child. I was raised in a traditional kosher home, with parents that were involved in our synagogue and community and held strong Zionist beliefs. At the same time, I attended public school, went out on Friday nights, played sports on Saturdays and when we were at restaurants, we sort of ate whatever we wanted. We were pretty similar to a lot of families I knew – except we had a sukkah.

Neither of my parents, having grown up in apartments in Brooklyn, had their own sukkahs, but as they started a family of their own on Long Island, with three children under 3, they somehow decided it was a good idea to purchase and erect one of their own. I have absolutely no idea why this was their choice. Our first sukkah was a bright green plastic one with a clear window stretched onto the side. It attached straight onto the early 1980s style “Florida room,” that our first house had. The neighborhood we lived in was very religious and there were plenty of sukkahs but all of the children whose houses they were at went to Jewish day schools or yeshivas. Most of my friends at the local elementary school were Jewish but my sukkah was the only one that they would visit. Since my school was walking distance, we even had my second grade class come for lunch.

We moved to New Jersey when I was in fourth grade and that green sukkah stayed on Long Island with the sale of the house to, naturally, a religious family whose children would of course attend a Jewish school. That very first fall my parents purchased a new, bigger sukkah – a large blue and yellow canvas adorned with decorations and blessings on the “walls.” I was in a brand new public school, with a large Jewish population, but not surrounded by nearly as many observant families as our neighborhood did before. My school once again was walking distance from my house and despite my nerves over it, my mother thought it would be a nice idea to invite the girls from my class to the sukkah for a snack one day. This invitation to my sukkah and so many more that would follow it became a trademark of the Sukkot holiday at my childhood home. It created countless memories for mine and my brothers’ friends over the years.

For days before Sukkot, we spent hours decorating our sukkah and making several trips to Party City to purchase fancy plasticware that went along with our color scheme. We strung lights and on cold years spaced out heaters to keep us warm. Throughout the holiday we cooked and cooked and had lots of guests and long meals that went way past the bedtimes of children that needed to be in school the next day. We would balance our homework, activities, and sports schedules with the busy schedule of the weeklong holiday. When I went off to the University of Michigan, I desperately missed our family sukkah – which was no longer yellow but now, the Maize and Blue Sukkah for my school colors – and longed to be home for the holiday. As soon as I was back on the East Coast, in Washington, DC and then New York City, my husband and I always made sure to spend a few nights back in that sukkah.

When my children were little, I was lucky enough to live close by and we ate dinner each night at that sukkah. My children would make paper chains and stand on our shoulders to cover the roof of the sukkah with plastic fruits. As those years settled in our family was bigger, with spouses and grandchildren and so the guests weren’t as frequent, and the meals became a little less complex but in the sukkah we would always dine. Several years ago, when my parents sold my childhood home, I inherited the sukkah. During those first few years, much like my parents we invited many guests, providing anyone that wanted the opportunity to eat in a sukkah, the chance to come on over. It was exhausting but also wonderful. And began to create the same traditions I had growing up.

Then to add insult to the year of 2020 and truly set me over the edge — the sukkah broke. Apparently sukkahs don’t survive forever, and I guess 34 years was a good run. At that point, with all that was going on, I really thought that would be the end of having our own sukkah. We were busy with full-time jobs and studying and practices for sports and instruments. We had so much going on — I really couldn’t bring myself to think of filling a week with cooking, cleaning and entertaining. Yet, something tugged at me and we purchased a new sukkah.

Again, feeling somewhat overwhelmed with the holiday approaching, we decided together that the sukkah would go up this year but without much fanfare. I know it was still the beginning of Sukkot on Tuesday but we were busy running around with our normal schedules. Even though I was off of work for the holiday, I was inundated with texts and emails about antisemitic incidents – that clearly does not stop so that Jews can celebrate and eat in huts in their backyards for a week. From the now well-known Kanye post to swastikas found at my town’s middle school, to calls about a girl a few towns over being called antisemitic names, I was saddened and disheartened at what was going on around me.

In between dodging the calls and texts, I was formulating my responses into a blogpost when it dawned on me – it was almost the third night of Sukkot and we had barely been inside ours. We hadn’t eaten there at all the five of us together. It was getting cold and late and my eyes were burning from being tired, but I remembered what my wise teenagers often say to me: Mom – stop always talking about and posting about Jews in trouble. And they’re right – well at least, partially right. It is my job, my responsibility and my desire to educate about hatred against Jews but it is equally as important to celebrate what we fight for — and that is  to be Jewish.

I raced home from my middle son’s soccer game and threw together the most unimpressive holiday meal. I had a bag of frozen vegetables from Trader Joe’s and a few steaks that I had defrosted that morning to throw onto the grill. I set the table in the sukkah with the basic paper plates that I had in the house and told my children and husband to come on out. My oldest had just returned from a run and the middle was barely out of his soccer uniform and all three of them still had homework to complete. But for the next half hour, my family of five sat in our new sukkah. A sukkah that barely has a roof, zero decorations, and no guests to fill it. But we laughed and joked and talked about absolutely nothing of importance. We didn’t mention Kanye or the swastikas at the middle school. We didn’t necessarily talk about anything that was Jewish. We just ate dinner in our sukkah together on a beautiful, crisp fall evening — a tradition that has been done for generations upon generations.

By the next morning, I was back to digging into the world of antisemitism and the desperate need for Holocaust education. I loved seeing the posts and stories standing up for Jews, and I was thrilled that so many in my community reached out to ask my advice and wanted to do something about the recent antisemitic incidents. But I also wanted to savor that dinner in the sukkah. For if we are so intent on fighting off hatred, we also need to be intent on being Jewish, and living Jewish. And for everyone that might look a little different. For us there is so much to our world that is rooted in our Jewish faith — especially our week in the sukkah. And although we didn’t have many guests or matching plates this year, we celebrated, and we remembered why we speak out about antisemitism.

About the Author
Ilyse Muser Shainbrown was a former Middle and High School History teacher who now holds a master’s degree in Holocaust and Genocide Studies. Over the years she has done extensive research on various portions of the Holocaust and other acts of genocide including, Rwanda, the Belgian Congo and Bosnia. Currently, Ilyse Muser Shainbrown is the Director of Holocaust Education at the Jewish Federation of Greater MetroWest. Through both programs, Ilyse works to ensure that Holocaust education is taught broadly in public, private and parochial schools throughout Essex, Union, Morris and Sussex counties.
Related Topics
Related Posts