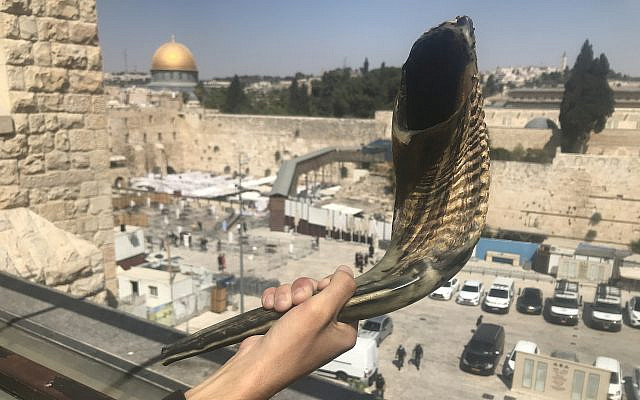 Parsha Bereshies goes through all of creation. From the heavens and the Earth, to light, animals and finally humans. Unlike the rest of the universe which it says G-d spoke into existence, man has a unique way of coming to be with the creation of Adam. On the first Rosh Hashana, G-d blew a soul into Adam’s nostrils giving him life, consciousness and free will rather than being controlled by his instincts like the rest of the animal kingdom.

What was so special about the creation of man which deserved a different way of origin than the rest of the world? When you speak something, you release your thoughts into the world and it becomes something separate from you. This obviously is not the case when it comes to the Creator of the universe since he is one. However, speech is easy. It does not take a lot of effort to speak. Blowing a soul into the nostrils of Adam rather than speaking him into existence has a very beautiful meaning behind it. When one blows something, they are taking what is deep within them; something that wouldn’t normally come out and release it into the world. By blowing a soul into Adam rather than speaking it, G-d took something that was deep within Himself and gave it to man. This G-dly neshama we have within us is a piece of G-d himself from the innermost part of him.

This now ties into Vayeira at the Akedah. Abraham was told to sacrifice his son Isaac, but right before he did an angel stopped him. Instead of his son, Abraham sacrificed a ram stuck in the bushes of Mount Moriah also known as the Temple Mount.

What is this connection? The ram’s horn we blow on Rosh Hashanah comes from this parsha. The Akedah represents the ultimate test of faith which our Patriarch Abraham clearly passed. For the rest of time, we will blow the shofar to show Hashem that our faith is within us just as much as it was in Abraham’s.

When blowing the shofar, you release a ton of air from inside you. The Baal HaTayna says air resembles faith. We do not see it but we know it is there. Similarly, G-d is hidden within the world yet we know at all times he is with us, always. Just like G-d blew his inner depths into man, now is our time to blow ours back to G-d recognizing that at our core, we are Hashem Himself, who created us by blowing a soul into Adam.

The Shofar pops up at other times too. Most noticeably in the book of Joshua and book of Judges when we are about to invade Jerico and Mideon. By blowing the Shofar in Jerico, the walls of the city sunk into the ground allowing the Jews to come in and claim the city G-d gave us. In Mideon, our massively outnumbered army of only 300 men blasted their Shofars before a massive victory. Other great victories we have had such as the Macabees, Israel’s War of Independence, 1967’s reclaiming Jerusalem, destroying our enemies during the times of Mordecai and Esther and more are nothing less than proof of Hashem’s love and protection of the Jewish people.

Why is this holy object known for its use on Rosh Hashanah, one of the high holidays, also used in times of war? It is because even in war, it isn’t our physical might that makes us win. It is the essence Hashem gave inside us that ultimately leads to our triumph. If we understand that our strength is from our faith in G-d and not our weapons, we are at our strongest.

When Israel captured the Temple Mount in 1967, one of the first things the people did was blowing the shofar. This signified its liberation and recognition the Jews had their eternal capital back in their control for the first time in 2000 years. Getting the Temple Mount back is not the end of our current exile but a small glimpse at what is to come.

The Maharal points out that the root of exile in hebrew is spelled gimmel, lamed, hei; while the root of redemption is gimmel, aleph, lamed. The only difference between the two words are the hei and aleph. Aleph’s gematria is the number one while hei’s is five. During times of unity within Am Israel, we are one and worthy of redemption. When we are divided, Hashem scatters us to the four corners of the world and its center; five different places in exile.

We blow the shofar on Yom Kippur only during the Jubilee year. This signifies the unity of Am Israel. If one Jew needs to free their slaves, forgive debt owed to him, give back land to its original owner and more; it will be very hard on that one person. However, when we hear this blast and know that all our fellow Jews will be doing this mitzvah with us, it makes things much easier knowing we as a collective are all acting as one.

Every Shemoneh Esrei, we pray for the Ingathering of the Exiles. “Sound the great shofar for our freedom, raise the banner to gather our exiles and gather us together from the four corners of the earth.” When we are united we will all return as one people, as the gemara states, “You are called Adam.” Saying “Adam” in the singular represents how Jews are like one being, all interconnected. If one Jew is in pain, we all mourn; if a Jew is happy, we all rejoice. Only when we reunify will our prayers be answered and the great shofar will be blown signifying the end of exile and a time of freedom and peace.

Hashem’s covenant is eternal and he will never abandon the Jewish people. He, like our father, seeks what is best for us and wants a relationship with us. All Jews originate with Abraham making us the world’s biggest family and G-d cares about all of us very much.  He wants to see us grow. The root of shofar is a shin, pay and reish. This spelled out is shapare which means “Improve yourself.” We should always try to elevate ourselves to connect to Hashem by using his wisdom in the Torah given to the Jewish people.

When the 10 Commandments were given in Parashas Yisro, Moses was not allowed to ascend up Mount Sinai until the sound of the shofar was heard. “The sound of the Shofar was very powerful, and the entire people that was in the camp shuddered.” All the Jews heard G-d during this national revelation, something no other people have ever experienced. Even the souls of Jews who were not born yet came down to be a part of it.

We renewed our covenant in Parashas Nitzavim, “Not with you alone do I seal this covenant and this imprecation, but with whoever is here, standing with us today before Hashem, our G-d, and whoever is not here with us today.” Mount Sinai was the peak of connection between G-d and his children and one day our connection will be just as strong if not stronger.

All Jews throughout history are part of this tremendous partnership with G-d to elevate the world and bring him closer to all of his creations. We accomplish this by doing mitzvahs, prayer, being a united family and a light upon the nations. When we hold our end of the bargain, he will do whatever in his power to help us along the way and make us the best people we can be.

Incorporating Hashem into our everyday lives will keep His attention on us and He will bless us as spoken about in Parashas Bechukosai. “Five of you will pursue a hundred, and a hundred of you will pursue ten thousand; and your enemies before you will fall by the sword.” When the Jewish people are united, it is when we are at our strongest and we will always have G-d’s protection even in the darkest of times.

The High Holidays are when more Jews show up to pray than any other time of the entire year – symbolizing the peak of Am Israel. Our Shofars blast loud on Rosh Hashanah because as Rabbi Zucker of Aish HaTorah teaches, we are returning our inner essence back to Hashem and showing Him that our Ner Tamid (“eternal light”), i.e., our neshama, will never go out and the Jewish people will always shine their G-dly light shine into the world.