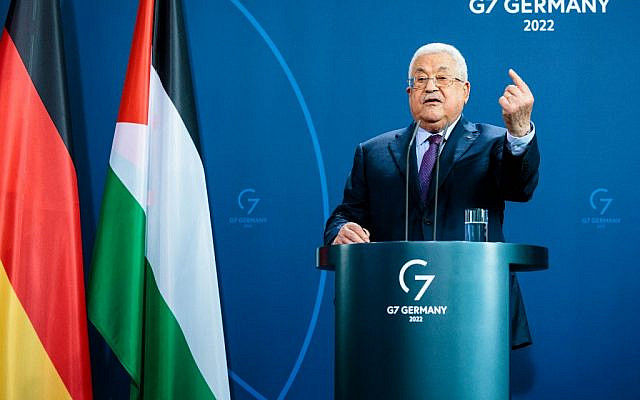 During a meeting with German Chancellor Olaf Scholz in Berlin, Mahmoud Abbas, when asked if he would apologize for the murder of 11 Israeli athletes during the Munich 1972 Olympics, a massacre that he financed, he not only refused to apologize but actually accused Israel of committing “50 holocausts!”

Now, for those of us who know Mahmoud Abbas and know his history, this is not a surprise – in fact, he is simply showing just exactly the kind of person he is.

He has always been a Jew hater. He wrote a thesis accusing Jews of inflating the holocaust figures for political gain. He also blamed the holocaust not on antisemitism, but on the “social behavior” of Jews. In other words, he says Jews brought it on themselves.

But this is more than just one person – it’s about what he represents: the lies, the fabrications, the falsehoods.

He, along with a large part of the Arab and Muslim world and much of the so-called fascist liberals of the west, have built an industry – an industry of hatred and malice and evil.

An industry built on fairy tales and lies and deceit whose only aim is to delegitimize the Jewish people – our history, our nation, our culture.

Anyone with even the most basic semblance of logical or historical understanding would immediately dismiss his rantings as that of a madman. In the Holocaust we lost a third of our people when 6 million Jews were systemically murdered by the Nazis and their collaborators in just a few short years.

Meanwhile, the so-called Palestinian population increased from roughly a little under a million in the 1960s to about 5.2 million today. And if you want to know why I start from the 1960s, it’s because, until that time, there wasn’t even a ‘Palestinian’ nation – it was an invention of the Soviet Union in 1964 when they created the Palestinian Liberation Organization. And yes – that’s three years before the six-day war and the fictitious ‘occupation of Palestinian land’ occurred.

But according to Mahmoud Abbas, the Jews have committed “50 Holocausts” against the Palestinians! And I shouldn’t really have to remind anyone that the way genocide works is that the population decreases as it did for the Jews during the Holocaust by 33%, not increase as it has for the Palestinians by over 500%!

The truth seems so simple!

But this is not really about the truth, for if it was, it would have been settled decades ago. It’s about more than that. It’s about the deep seeded hatred of Jews that has existed in many parts of society throughout history and those who tap into that hatred.

Now many might read this and think I’m being paranoid, but how else can one explain the lack of any sanction against those who spew out these poisonous lies again and again and again.

It’s completely illogical and abhorrent to those with any kind of the most basic understanding of morality, and yet that lack of morality is exactly what drives this.

The United Nations have entire committees formed to attack Israel – while ignoring the atrocities committed by the many Palestinian terrorist organizations. The antisemitism of the members forming these committees, such as Miloon Kothari and Navi Pillay, are often very publicly exposed, but they remain held ‘in high esteem’ without any sanction or punishment finding their way to them.

In fact, the only time UN officials are punished is when they show some kind of balance and acceptance of reality such as Sarah Muscroft who tweeted “indiscriminate rocket fire of Islamic Jihad provoking Israeli retaliation is condemned.”

She was removed from her office for that ‘offense.’

But this is the world we live in, in which the basic tenets of morality have been flipped so blatantly that up is now down. Left is now right. And terrorists who commit murder are innocent victims.

Mahmoud Abbas may just be one person, but he represents many who share his warped sentiment. It is shameful that knowing all we know about him; world leaders continue to treat him with a certain respect and reverence that is unfathomable to any decent person of conscience and justice.

Just last month, President Joe Biden stood alongside this illegitimate unelected antisemite and dictator, and said, “it’s good to see you again, my friend…. And I’m very proud to be with you today as President of the United States.”

President Biden should not be proud. He should be ashamed.

Just as any world leader or Israeli official should be when they talk of him as a partner or a man of peace, for he is the exact opposite of all those things.

For too long, too many people have put their faith in this evil man, refusing to see what is so blatantly obvious and so abundantly clear. And all those organizations and world leaders who continue to blindly support him and his cause are tainted by the same evil brush strokes he is painting.

The world may not see it, but we do. Mahmoud Abbas is not a partner for peace, but an agent of evil.