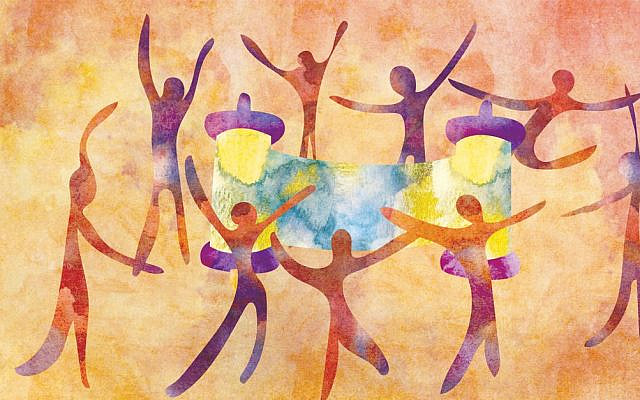 My 97-year-old mother passed away last Friday. I don’t intend to eulogize her here (although her remarkable life is interesting enough), but rather to analyze and valorize how the “math” of Judaic practice regulates emotion in times of personal and national, sadness and joy. There are two “ands” in this last sentence for a reason, as both “twins” are inextricably bound up with each other.

The normal custom of post-death mourning – in three stages – are well known: 1) Shiva: seven intense days of mourning at the home of the deceased (or one’s own home) with a flow of family and friends visiting with fond memories etc.; 2) Shloshim: 30 days of somewhat less intense mourning but still heightened with no shaving, wearing new clothes etc.; 3) The year: low grade mourning, but just for a parent (because only they are irreplaceable) – no attendance at group events (especially upbeat ones) because in Judaism a person can only feel true joy (simcha) within the larger group.

On the face of it, this is a reasonable progression for dealing with sadness, albeit seemingly somewhat stringent. “Somewhat,” because already here Judaic math enters the picture. First, the shiva does not start with death but rather after the burial. As that almost always occurs sometime in the middle of the day (to enable others to attend from afar), that first day’s shiva is just a few hours. At the other end — the last day — the mourners “get up” a mere hour after the morning service of Shaharit — i.e., they don’t sit the full day. So the “shiva”/seven is actually “five, plus a couple of small day parts.” Here’s the first sign of mourning “flexibility,” because no one is forced to end the shiva that last morning.

The real math, however, enters the picture when the deceased dies with the wrong (right?) timing: sometime before a Jewish holiday (Sukkot, Pesach, Shavuot, etc.). This is what happened with my mother. As she passed away right before Shabbat, the funeral had to take place on Sunday. Why? Because no funerals can be carried out on the holy day of Shabbat — not only because people can’t travel to one (I suppose in shtetl days everyone could have walked to the cemetery), but mainly because the joy of Shabbat supersedes any possibility of mourning.

However, this past Sunday was erev (the day before) Sukkot. That basically meant no post-burial shiva at all because according to Jewish law, a holiday completely cancels the shiva! (I did sit for 20 minutes upon returning from the cemetery.)

Indeed, the shloshim is somewhat truncated too. Here’s where the Mathematics of Jewish Emotion really kicks in. The start of any holiday is considered so joyous that it is equivalent to a week’s worth of sadness, ergo the shiva is negated. Moreover, if the first day of Sukkot (or Pesach) is equal to seven days of mourning, so too is the last day (Shmini Atzeret) equal to another seven days. And as the intermediate six (or seven) chol ha’moed holy/days are also minor joyous days – that’s another seven days of mourning neutralized. The result: the shloshim ends a mere week after the last day of the long holiday! In mathematical terms, my (erstwhile 30 day) shloshim ends up being a little bit more than a mere two weeks!!

Parenthetically, none of this affects the year’s mourning period for a parent. Except that here too, it isn’t a full year but rather “only” 11 months (there’s a reason for that as well, but too complicated for this essay).

What is the underlying reason for all these sadness neutralizations? It’s the mirror image of what I noted earlier: just as in Judaism personal joyousness is a matter of group dynamics, so too that same group joy as expressed in the holidays also limits one’s personal grief. Indeed, the psychology of the shiva experience itself suggests this, as it is always accompanied with the daily prayer service that demands a “minyan” — people surrounding and embracing the mourners to reduce their sadness.

In fact, this whole phenomenon — joy and sadness as two sides of the same coin — can be seen in other Jewish ways as well, one of them upcoming in a few days. Israel’s combination of Shemini Atzeret and Simchat Torah in one day (outside the Holy Land they each have their own consecutive day) — involves great joy of the “hakafot” (circular Torah dancing) with the lamentation for our dead family members (Yizkor) within an hour of each other. Or  the joy of Yom HaAtzma’ut (Israel’s Independence Day), immediately preceded by Yom HaZikaron for the country’s fallen soldiers.

Modern psychological research has caught up with what Judaism has known for millennia: a person cannot feel real joy without having undergone emotional pain; similarly, the amelioration of personal pain is best dealt with in a close-knit group context.

No shiva for my mother? No problem. There’s a truncated shloshim and many months thereafter to mourn. Her strong Judaism shows the way: my sadness at her passing is ameliorated by the joyousness of belonging to the Jewish people and its wonderful (if somewhat “unusual” but effective) customs.

About the Author
Prof. Sam Lehman-Wilzig (PhD in Government, 1976; Harvard U) taught at Bar-Ilan University (1977-2017), serving as: Head of the Journalism Division (1991-1996); Political Studies Department Chairman (2004-2007); and School of Communication Chairman (2014-2016). He was also Chair of the Israel Political Science Association (1997-1999). He has published three books and 60 scholarly articles on Israeli Politics; New Media & Journalism; Political Communication; the Jewish Political Tradition; the Information Society. His new book is VIRTUALITY AND HUMANITY: VIRTUAL PRACTICE AND ITS EVOLUTION FROM PRE-HISTORY TO THE 21ST CENTURY (Springer Nature, Dec. 2021): The book's description, substantive Preface and full Table of Contents can be freely accessed here: https://link.springer.com/book/10.1007/978-981-16-6526-4#toc. For more information about Prof. Lehman-Wilzig's publications (academic and popular), see: www.ProfSLW.com
Related Topics
Related Posts