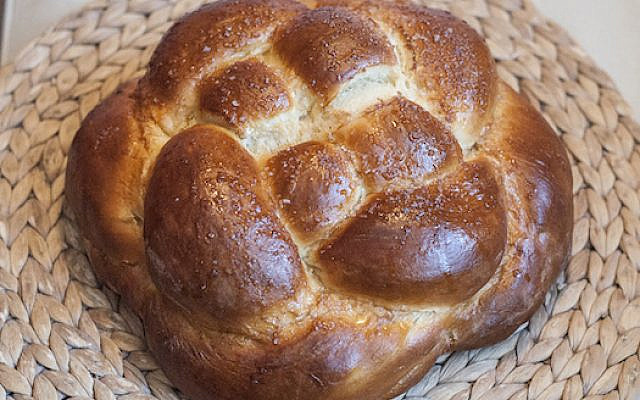 My friends are all busy planning New Year’s Eve celebrations. But not me. I’m still savoring this year’s Jewish New Year which was made especially sweet thanks to my non-Jewish husband.

I had been feeling under the weather for a few days, and so, was behind the curve in my holiday meal preparations. Come the morning of the Rosh Hashanah, I made a mad dash to the market for matzo ball soup ingredients, the entrée and, of course, challah.

Arriving at 8:15, I headed straight to the bakery section. No challah.

The baker apologized, recognizing it was no small deal, but there was nothing he could do. He acknowledged my plight and wished me a happy holiday. The end.

The end for him, but not for me.

I called one of Reno, Nevada’s fanciest bakeries, a European-named bakery. The woman who answered the phone thought “challah” was my last name. As for the bread, “Never heard of it.”

No challah for Rosh Hashanah? Unthinkable. I hadn’t started out that day thinking I’d score a round challah, and I had no illusions about securing a raisin challah, but no challah at all? This was a crisis.

Now I am not generally one for public displays of emotion, but there in Aisle 7 of Whole Foods, I burst into tears.

Then, I called my husband to relate the challah catastrophe. No, that’s not accurate, I said he was to blame for the crisis because he had “forced” me to move to this challah-forsaken hick town, his beloved childhood home. Then, I declared, a la the Blue Brothers, I was off on a “mission from God.” intent to search market-by-market for challah.

So began my challah hunt. At the next market, I was greeted by a look of polite puzzlement by a bakery staffer who had never heard of challah. I left, feeling unseen and unrepresented as a people and as a person!

Trudging to the car, my phone rang. My husband announced in triumph, “I’ve found one. Come home. I’ll pick it up.”

Yes, after placing eight calls, Jon had reached a wholesale bakery, a supplier to area hotels, who took pity on my beleaguered spouse. The kind sales representative put him on hold and ran out to a truck pulling out of the driveway en route to make the last delivery of the day to reclaim a challah. She even told Jon that saving a challah for him was a mitzvah. He, in turn, told her she probably saved the marriage as well!

Jon returned like a proud papa, cradling the precious golden braided bundle in his arms. He had the biggest smile on his face, proud to have secured the bread and redeem the honor of “The Biggest Little City in the World” in the process.

Now, I have received dozens of bouquets of roses from this man through the decades of our marriage. Also, candy, jewelry, and a host of delightful other gifts, but this challah was the sweetest, most loving gift of all.

The challah crisis happened on a Monday which is Jon’s busiest workday each week. He typically has back-to-back Zoom meetings and phone calls. The day is usually so packed, he doesn’t get a lunch break. So, for him to interrupt that schedule, make a series of phone calls, and then dash out to shop is no small matter. And he had to do all that and finish work early in time to join the family for a Rosh Hashanah celebratory meal. It’s no wonder that my father called Jon a gutte neshuma — a good soul.

As for me, I’m quoting Shakespeare and his fair Juliet who said, “What’s in a name? That which we call a rose by any other name would smell as sweet.”

In my case, that applies to both this year’s challah and my sweet husband who I adore more and more every day, every year.

About the Author
Karen Galatz is the author of Muddling through Middle Age, which provides women (and men) of a certain age a light-hearted look at the perils and pleasures of growing older. An award-winning journalist, her national news credits include The MacNeil/Lehrer NewsHour and the Nightly Business Report. Her fiction and non-fiction writing has been published across the U.S. More of Karen's writing can be read here: muddling.me A native of New York City and Las Vegas, Karen now lives in Reno, NV with her husband, two children, and one neurotic dog named Olga, rescued from Florida’s Hurricane Erma. It all makes for a lot of geography and a lot of humor.
Related Topics
Related Posts
Karen Galatz
Comments