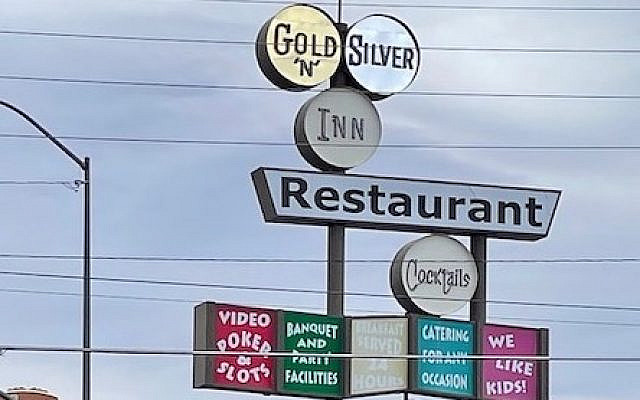 In this case, the one feeling sad and nostalgic is my husband — and apparently half of Reno, Nevada. The establishment in question is called the Gold ‘N Silver Inn. It opened in 1956 and bills itself as the city’s “oldest casual restaurant.”

I, for one, am not questioning the antiquity of the Gold ‘N Silver. I don’t think the carpets have been “refreshed” since opening. The booths are sad and sagging; the walls decidedly dowdy, but, oh, the hospitality and service! It’s warm, friendly and fast. The bus “boys,” long in the tooth, and the waitresses, many clad in orthopedic-looking shoes, are on the top of their game. They know the menu and their customers — by name and favorite foods.

And that food? Well, it’s inexpensive comfort food at its best. Breakfast is served 24 hours a day, and as a French toast connoisseur, I can say it’s the best I’ve ever eaten. And to think they don’t use challah. Blasphemy!

As for the fried chicken? According to husband Jon, it’s the chin-dripping juiciest and crispiest anywhere.

Jon has been going to the Gold ‘N Silver since he was little. Dinners out were a big treat in his family. So, fried chicken with a soda followed by a slice of apple pie was something special. Seeing his mother, who worked long hours in a nearby drugstore coffee shop, was also special.

The first time Jon took spoiled Jewish American Princess me to the Gold ‘N Silver was not so special. He was in nostalgic Heaven. I was in dating Hell. I looked around with no attempt to conceal my disdain and distress — debating a quick exit from the diner and the new relationship. Then, I tasted the French toast. The troubled dating relationship waters were stilled!

But change comes to all things, and now the Gold ‘N Silver has been sold to a developer with big plans. Devoted patrons are staging protests, but what can you do in the face of time and progress?

For many people, change is difficult. In our last locale, Berkeley, California,  I witnessed countless battles and debates over popular establishments shuttering, neighborhoods changing and the relentless pace of gentrification. Now, here in Reno, similar explosive growth is underway and it’s making many people unhappy or, at least, uncomfortable.

I, on the other hand, grew up in a whirlwind of change. First, I’m from New York City, a place constantly reinventing itself. Buildings get torn down, neighborhoods get bulldozed, restaurants change hands and shops go bankrupt with the regularity of a heartbeat. Neighborhoods are “hot” one day, then, they’re not. Clubs are trendy today, passe the next.

Plus, my family was peripatetic in the extreme. I went to 22 schools, moving between the East and West coasts like a migratory bird.

Finally, living in booming Las Vegas, Nevada, I’d return from college after a semester, go to make a turn at a vacant lot, only to be bewildered and momentarily lost because in the intervening months, a strip mall had sprung up!

So, while Michelle is my official middle name, “Change” could be my unofficial moniker!

But now, for my more steadfast spouse, having just moved back to his childhood hometown, the closing of the Gold ‘N Silver is a blow. This homey dive, once featured on a popular US TV show, Guy Fieri’s “Diners, Drive-Ins and Dives,” is a touchstone of his childhood, high school, college, and early professional years.

It just shows that home is not only where the heart is, but also where the stomach is. It also shows that comfort food served at a favorite downtown diner or deli, just like meals cooked in your mother’s kitchen, can bring back memories of special people and joyous times.