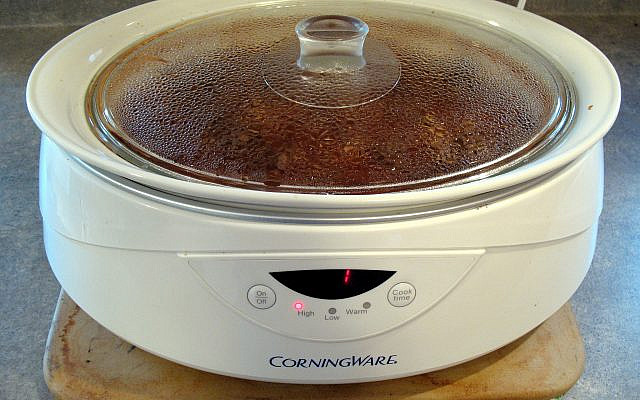 My mother and grandmother tried to teach me to cook, sharing prized family recipes. My sisters-in-law gave me cookbooks. And my husband misguidedly set up “romantic” date-night cooking classes.

Then, a colleague at work — one of those wonder women gals — handed me a dumbed-down recipe for chicken Diana and a gift-wrapped crock pot. This gift was this bad cook’s cooking salvation.

Since then, I’ve transformed into a veritable queen of the crock pot, a savant of the slow cooker. I make beef stew with sun-dried tomatoes and white beans, jalapeño corn pudding, and chicken tikka masala with the skill of, well, the skill of somebody who can read a recipe and put together an edible, enjoyable meal.

Who knew a lowly, inexpensive electric vessel could turn a culinary failure into a hostess with the mostess?

And here’s something else you might not know: the slow cooker was invented by a Jew, Irving Naxon (nee Nachumsohn). Inspired by his grandmother’s slow-cooked cholent in Vilna, Lithuania, Naxon applied for the first patent for a slow cooker in 1936.

He initially called it “The Boston Beanery.” It came in two colors, making it easy to distinguish one for dairy and another for meat. It wasn’t a big seller for Naxon, who ultimately sold the patent to a rival, ironically called Rival. That company rebranded it as the Crock Pot in 1972 and a cooking revolution began.

By 1975, crock pots were so popular that the book Crockpot Cookery was a bestseller, right along with The Joy of Sex and The Star Trek Starfleet Technical Manual!

And by the 1979 energy recession, their usage soared even higher because slow cookers which use the energy equivalent of an incandescent light bulb are a lot less expensive to run than an oven. (And, of course, they’re easier to clean too.)

But for me, it’s not about convenience or cost. The ease of operation is the key to my love affair.

Oven temperatures are fickle. Gas burners scare me, and even I know, microwaving food is for rank amateurs, not moms and hostesses. Take out is for cheaters and reservations seven nights a week impractical.

For years, I was a chef with a limited menu. For dinner, I could reliably be counted upon to serve steaks, lamb chops, tacos, and somehow, a killer great brisket. For breakfast, I served salami and eggs or French Toast. For lunch, tuna salad. That was it.

As for my late-in-marriage/motherhood, come-to-cooking moment, I’m not sure what finally sparked it. I think it was probably shame. There comes a point when you can “make reservations” only so many times. So, when my friend gave me that slow cooker, it was one of those simultaneously “in the nick of time” and “better late than never” moments.

And I don’t know who was more grateful for that gift — me, my spouse and children, or my mother, ready for a break from her unpaid job as the family chef!

So, while today, I have branched out and do successfully use the oven and the stove for meal preparation, I prefer and excel at slow cooker recipes. They’re my safety, do-no-harm cooking comfort zone.

If you’re in the neighborhood next Sunday, come on over. I’m making braised beef ragu with polenta. I’m trying it for the first time. But since I’m using my trusty crock pot, I’ve got no first-time recipe jitters!