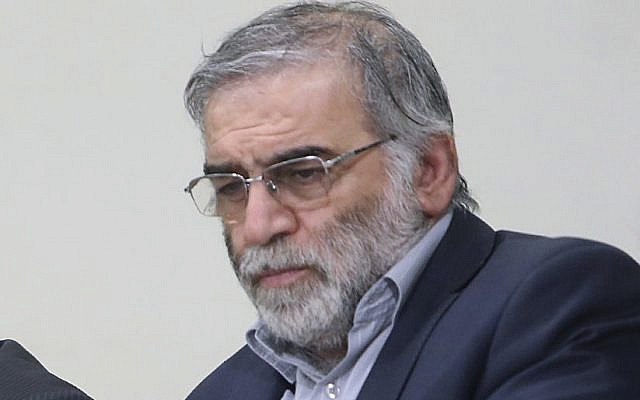 In this cropped photo, Mohsen Fakhrizadeh sits in a meeting with Supreme Leader Ayatollah Ali Khamenei in Tehran, Iran, January 23, 2019. (Office of the Iranian Supreme Leader via AP)

Those who sought to eliminate Zadeh wanted to achieve a number of key objectives, the first of which was to significantly undermine Iran’s ability to re-establish an arms group for its nuclear project, putting significant difficulties in the face of Iran’s ability to adapt its civilian program to military purposes. Furthermore, the knowledge that existed in Zadeh’s head from his time as head of the Amad project was unique and priceless, and this fact, together with the deterrent dimension of the elimination that should warn every element in Iran not to lend a hand to such a move, should help achieve this goal. It is also possible that whoever carried out the elimination also thought that Fakhri Zadeh’s death would cause Iran’s leadership to lose confidence in their ability to re-establish the nuclear military project aimed to achieve a bomb without him.

It should be emphasized that this is not the first time Iranian nuclear scientists have been eliminated by foreign assassins. As early as the end of the previous decade, a wave of assassinations against prominent Iranian nuclear program figures such as Masoud Alimohammadi and Mostafa Ahmadi Roshan and others began, and according to some reports, even Mohsen Fakhri Zadeh himself was a target back then.

However, it is important to note that Iran’s nuclear program does not rise or fall on Mohsen Fakhri Zadeh. Iran’s enrichment system is a large and well-established program run by the Atomic Energy Organization of Iran (AEOI) and eliminating a single individual, important as he may be, can not harm that. Furthermore, the disclosures following Israel’s raid on Teheran’s nuclear archive proved that Iran’s nuclear knowledge is extremely broad, and certainly does not reside in the mind of just one person.

Even if Iran decides in the future to return its nuclear program to a military trajectory, it is not at all clear whether Mohsen Fakhri Zadeh, whose name was published in every possible media outlet and whose activities were known far and wide, was the one who would have headed this kind of project.

It is important to note that this elimination is a severe blow to the Iranian regime, coming a few weeks after the assassination of al-Qaeda’s number 2, Mohammed al-Masri, on Iranian soil dealt the regime another embarrassment. The chances, therefore, of Iranian retaliation for this elimination are high because failure to respond could severely damage the regime’s security image.

If, as the Revolutionary Guards have stated, the Iranians do intend to avenge Mohsen Fakhri Zadeh death in the same way they did in response to the assassinations of previous scientists, they are likely to do so through the clandestine cells they operate around the world mainly in the areas where they operate with relative ease, whether it’s Asia or South America. Their likeliest targets will be diplomats, embassies and scientists. Either way, if Iran chooses this kind of response, it cannot carry it out immediately because of the logistical complexity, so we have tense weeks ahead of us.

Iran can also decide to carry out its response through her proxies (such as Hezbollah) but history shows that in these kinds of events Iran prefers to carry out the response itself from different locations.

It is important to say that the absence of General Qasem Soleimani and Iran’s reluctance to damage the situation before Joe Biden’s team enters the White House mean the Iranian response will likely be limited and not go to drastic lengths such as by using Iran’s other military capabilities).

The bottom line is that the elimination of Mohsen Fakhri Zadeh is one of the most significant events in the campaign against Iran’s nuclear program and is a major blow to the regime in Tehran and its efforts to resume the military nuclear project (if and when it decides to do so). However, this elimination, like previous events, does not back Iran’s civilian program, significantly harms but does not completely eliminate Iran’s ability to return to a military nuclear project (and may perhaps lead the Iranian regime to find a suitable replacement for it) and especially does not absolve the international community from having to make difficult decisions about the hot potato called the Iran nuclear project.