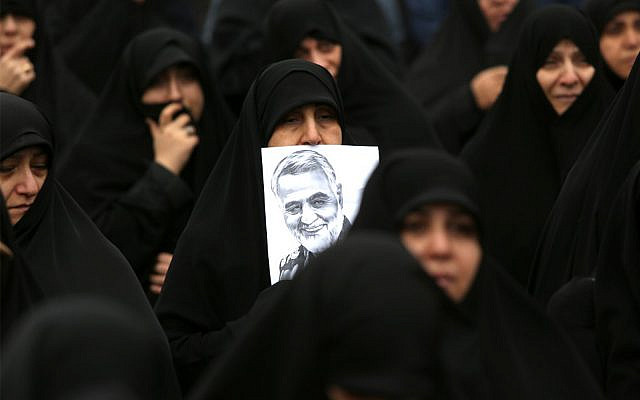 What will the Middle East look like following the targeted killing of Qassem Soleimani, the head of the IRGC-Qods Force? In the short term, there is no doubt that Iran will retaliate, tensions will rise, and there will be violence across the region. In the long term, the United States has changed the rules of the game, and now without Soleimani’s malevolent leadership, the Middle East will be a better place.

After a quick look at coverage of the event in the American media, this conclusion is not apparent. Following the targeted killing of Soleimani, there was widespread criticism of the operation in the American media. A New York Times editorial called it, “a sharp escalation in the conflict between the United States and Iran”. However, these critics ignore the fact since the 1979 Islamic Revolution, Iran has committed numerous acts of war against the United States. Indeed, the list is very long.

Iranian attacks against the United States include the 1979 takeover of the US Embassy in Tehran and the hostage taking of the embassy staff for 444 days, the 1983 suicide bombings of the American embassy and the Marine barracks in Beirut carried out by Hezbollah with the support of Iran, the 1983 bombing of the US embassy in Kuwait, and the 1996 bombing of the Khobar Towers in Saudi Arabia that killed 19 US Air force personnel.

Between 2003 and 2011, the US Department of Defense estimates that Iran was responsible for the deaths of at least 600 American soldiers in Iraq by supplying sophisticated roadside bombs to its terror proxies in Iraq.

More recently, it was Iran that escalated tensions with the US through Iraqi proxy forces like Kata’ib Hezbollah that launched rockets at American forces in Iraq and organized the attempt to take over the American embassy in Baghdad. Indeed, it was no coincidence that Abu Mahdi al-Muhandis, the leader of Kata’ib Hezbollah, was killed alongside Soleimani in the attack.

Of course this list does not include Iranian sponsored terror attacks on US allies including Iran’s long-standing support for Palestinian terrorism that targets Israeli civilians, the suicide truck bombings of the Israeli embassy in Buenos Aires (1992) and the AMIA Jewish community Center (1994), both of which were joint operations of Hezbollah and Iran. And more recently, there was the Iranian missile attack on the Saudi oil fields on September 14th.

Therefore, the targeted killing of Soleimani by the United States was a game-changer.

Although the economic campaign is highly effective and has a major impact on the Iranian economy, it was obviously was not enough. Soleimani interpreted the apprehension of the U.S to use military force against Iran as a sign of weakness.

Now “maximum pressure” has taken on a new dimension: a willingness to use military force to enforce red lines.

As President Trump said in his remarks the day after, “We do not seek regime change. However, the Iranian regime’s aggression in the region, including the use of proxy fighters to destabilize its neighbors, must end, and it must end now”.

The President went on to add a very specific red line. He said, “If Americans anywhere are threatened, we have all of those targets already fully identified, and I am ready and prepared to take whatever action is necessary”.

The other implication of the demise of Soleimani is directly related to his pivotal role in destabilizing the region.

Since Soleimani took over leadership of the IRGC-Quds Force in 1998, he was responsible for implementing one of the guiding principles of the Islamic Republic of Iran: “Exporting the Islamic revolution”.

In recent years, Soleimani had been both the visionary and driving force behind Iran’s efforts to create a “land corridor from Tehran to the Mediterranean”. To achieve this goal, he sought to dominate Iraq, Syria and Lebanon.

However, Soleimani’s land bridge project has come at great cost to the people of the Middle East. In Syria, there are more than half a million dead civilians and more than six million refugees, largely because of Qassem Soleimani.

Since the outbreak of the Syrian civil war in 2011, Soleimani and the IRGC-Qods Force provided the regime of Bashar al-Assad with massive financial support and an endless supply of ammunition and weapons. With the help of Hezbollah, he recruited, trained and deployed thousands of foreign fighters to Syria from Afghanistan, Iraq, and Pakistan.

It’s also important to mention that by aiding and abetting the Syrian regime, Soleimani was complicit in committing war crimes which included the targeting of hospitals and the torture and murder of at least 100,000 civilians in Syria’s notorious prisons.

And all this was allowed to happen because an indifferent world remained silent on Syria.

Yet, Soleimani’s motivation for regional domination was not just to control territory for the sake of expanding Iran’s hegemony and “exporting the revolution”. Soleimani planned to use this vast territory to create a platform to wage a future war for the destruction of Israel. This is especially evident in Lebanon and Syria.

It is because of Soleimani and the IRGC-Qods Force that Hezbollah now has an arsenal of more than 130,000 rockets and missiles that can hit any target in Israel. Soleimani was also working to upgrade the accuracy of this vast arsenal with something called “the precision missile project”, a very dangerous development from Israel’s point of view.

In Syria, Soleimani and the IRGC-Qods Force have been working to build a military infrastructure to threaten Israel which explains why the Israel Air Force has launched hundreds of air strikes against these targets over the past several years.

The day after Soleimani was killed, Israeli journalist Ben Caspit wrote, “In closed-door meetings over the past year, senior Israeli defense officials often explained that the war Israel was waging was not against Iran, but against Soleimani. Israeli and Western intelligence assessments claimed that Soleimani was not reporting to his superiors on his plans and not always telling Iranian Supreme Leader Ali Khamenei the truth, and suggested that without him, the spirit of the Iranian revolution would be far more moderate”.

Absent Soleimani’s pivotal leadership, and combined with the “maximum pressure campaign” of the United States and its newfound willingness to use military force, the leaders of Iran will eventually be forced to make a choice. They will have to choose between acting like a normal nation and working to improve the lives of their citizens, or continuing their support for terrorism and efforts to destabilize the region. With the new costs to their support for terrorism, they cannot afford to do both.

And there is also a role for citizen activists in the effort to curb Iran’s dangerous ambitions.

Since its inception in 2008, the bi-partisan, educational and advocacy group that I represent, United Against Nuclear Iran (UANI), has made it clear that the challenges posed by Iran are not limited to the nuclear realm. According to its mission statement, “UANI works to ensure the economic and diplomatic isolation of the Iranian regime in order to compel Iran to abandon its illegal nuclear weapons program, support for terrorism and human rights violations”.

Since he took over the leadership of the IRGC-Quds Force in 1998, Qassem Soleimani literally got away with murder. Through his support for Palestinian terrorism, massive support for the brutal Syrian dictator Bashar al-Assad and terror proxies in Lebanon and Iraq, Soleimani had the blood of tens of thousands of innocent people on his hands. With his demise, the Middle East will be a better place.