The Blogs
Don Davis
Apply for a Blog
Please note that the posts on The Blogs are contributed by third parties. The opinions, facts and any media content in them are presented solely by the authors, and neither The Times of Israel nor its partners assume any responsibility for them. Please contact us in case of abuse. In case of abuse,
Report this post.

After the Gaza/Israel War in May 2021, like the numerous ones in prior years, many are evaluating who won, the continuation of the Two-State Solution, and other options necessary for ‘peace’.

Basically, the same opportunities or scenarios that haven’t worked or been accepted for decades. What a waste of time and a charade, I’ll explain why.

First, let me begin by clarifying that my stance on the Jews and Israel, and their right to the land, has not changed.

Yet, I am not blind to the plight of the Arabs, both who live in Israel and in the region. And, it is far past time for the world to finally understand the real, unending reality, behavior and conflicts that have perpetually plagued the Middle East for millennia.

In contrast, the Arabs won’t give an inch. For in Arab culture compromise for land, or giving up land, is non-negotiable and is strictly for the weak, traitors, cowards or the dead. Losing land is ultimate humiliation, only restored by gaining the land back, and monetary or payment restitution for ‘stealing’, and ruthless revenge against the ‘land-thieves’.

The same is true of the Israel Zionist, and Zionists can be from the left or right, religious or secular, even from the Christian (Zionists) ranks. Giving up Biblical Land or any land deemed part of the original land promised by God to Abraham, Isaac and Jacob (named Israel), and any part of the Holy Land re-established by the return of Moses, Joshua and the Israelites, is unthinkable.

In both cultures, the land is concretely part of the deepest soul, thus inseparable.

Therefore, in close parallel to Arabs – Jews (and Christian’s approving) giving up parts of the Holy Land to Arabs are branded as Jewish or Christian weaklings, traitors or cowards. Hence, many times the collective Zionists are equated to racism or radicalism, and some people, groups or organizations categorize the Zionist as the same as the Arab radical terrorist.

In addition, both the Arab ‘radical’ and the Jewish (and Christian) Zionists, have the existing power, influence, money, and many would add, the intimidation factor, in both of their own venues regarding Israel. And, have the ‘zeal’ and willingness to use it if necessary, to reach each of their goals.

Very brief examples; Arabs caught selling land to Jews can be imprisoned, tortured, or killed, and many correlate Jewish capitulation of Egypt’s President Sadat to his assassination. Jewish individuals or groups supporting Arabs (including journalists) can be assaulted or intimated. Jewish leaders, as in the case of Prime Minister (PM) Rabin, was, allegedly, killed for his readiness to compromise. And, in the case of PM Sharon, purportedly, a Jewish supernatural curse, eventually resulted in his death.

There are no negotiation possibilities with the former and contemporary concepts, and unchanged mentalities and behavior, with either of these entities, and they both use the old, Middle East tactic, time, or stall and delay, to eternally drag the ‘peace plan’s’ into a black-hole oblivion, from one domestic and international administration to another. Decades.

That’s essentially why the Middle East is at an eternal impasse on the ‘peace plans’ and with present players, environment and behavior, there won’t be any peace or two-states. Neither truly want two states, it’s all or nothing. All the land, or war and death.

Moreover, each arguing over land hereditary origins for some 3000 years, particularity after the expulsion of the Ten Israelite Tribes during the conquest of the Neo-Assyrian Empire. Only the tribes of Judah and Benjamin were known to have survived in the land. Along with the immigrants from Babylon, Cuthah, Ava, Hamath and Sepharvaim dispatched to Israel to replace the Israelites by the King of Assyria (so, according to the politically correct, the immigrants sent by the King of Assyria would be the ‘real’ occupiers). Nevertheless, all the tribes have been killing each other for thousands of years for this land and region, and will continue until there is a single winner.

But let’s also assess what this Gaza/Israel War was really about; and what happened.

This conflict was another Iranian test against Israel. Along with their, Iran’s, coordination abilities with their proxies in Gaza, Lebanon, Syria, and inside Israel, against Israel and USA’s responses. Preparing for the ‘big one’ (war).

Nearly everyone knows, it is only a matter of time, unless something extraordinary or miraculous occurs, that we will have a venomous regional war in the Middle East with Israel vs. Iran, Syria, Lebanon, Gaza with Russian, Chinese and Turkey support. Maybe Jordan too, who knows, may include Egypt, and immediately spreading into USA and Europe via terrorism. War against Israel will certainly include some of the anti-Israel and anti-Jewish Palestinian Arabs and Israeli Arabs living in Israel.

Anti-Israel and anti-Jewish Palestinian Arabs and Israeli Arabs known as the Fifth Front of Fifth Column. And, if there was any doubt of the Arab Fifth Front’s potential razing-havoc in Israel, there is none now.

Furthermore, Arabs in Israel are distraught for being, according to their and other substantiated sources, misplaced from their homes in 1948 and 1967, treated as second-class citizens, in some cases limited water supply, electricity, and the worse, continually and viciously preyed on by local criminal gangs or clans. In which the Arabs charge that the Israeli Police do little or nothing.

Therein, the Arab Fifth Front will get worse. Because Israel and the Jewish Israelis have lost all Arab respect during this recent conflict with Hamas, and Arabs in Israel believe circumstances might be better with absolute Arab domination and with Arab leadership in the land presently called, Israel.

Extensionally, Arab culture only respects total winners, the strong, and verified, comprehensively, successful ‘warriors’. Bombing buildings, tunnels, rocket and mortar teams and installations, and a few mid-level Arab commanders (in comparison to the reigning Hamas hierarchy), are not the qualities of what Arab’s consider a winner. Nor is compassion or ethics in total combat, or fear of war crimes investigations. Also limited use or no direct use of soldiers and usage of principal weapons is considered weakness or cowardliness. Even though in our culture it is considered necessary and humane. But this ‘western-cultural’ war behavior encourages more Arab aggression towards a perceived, weak or cowardly enemy.

We westerners, and I loosely include Jewish Israelis particularly the secular, embrace modern and change.

I would go beyond and illustrate that we ‘westerners’, including, the Jewish Israelis, many times welcome idealism.

Whereas the Arab culture on the whole would deem this foolishness, and they steadfastly focus on tradition, religion, and their stark realities in these, their, realms.

This may appear depressing and frustrating to peace teams. It is, but it is also a regional fact that must be addressed as peace efforts must continue. Although, unless a new or revolutionary tactic is introduced the peace plan will be doomed to fail or straightforwardly collapse – again.

The only good that came out of the Gaza/Israel War for Israel, if the word ‘good’ can be used sympathetically in conjunction with war, is that to nearly everyone’s surprise, US President Joe Biden let Israel proceed for days, despite backlash from his own party.

This was an unexpected development to most analysts and probably, and mostly, to Iran. A large miscalculation of President Biden indeed, along with VP Harris, the US Secretary of State, and the US Department of Defense.

About the Author
Don Davis is a published Middle East analyst and book author. For more than twenty years most of his research material was client confidential and behavioral related. But many of his abridged reports on current or Israeli subjects have been posted as articles or blogs in, The Times of Israel, The Christian Messenger, a newspaper/journal/magazine, and in American news online. Don is also the book author of The Children of Santiago, The Theogonic Resurrections, My three and a half hours at Playboy Mansion West, and Knights of Consuming Fire.
Related Topics
Related Posts
Comments
Advertisement 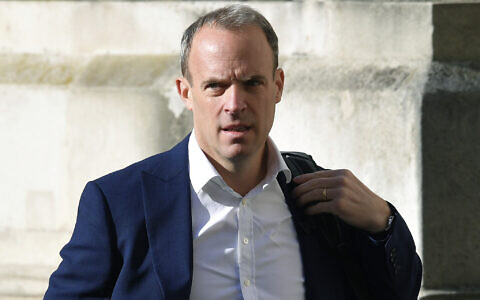