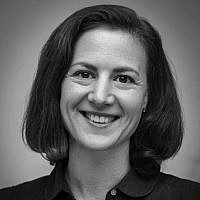 The Blogs
Sharon Ann Musher
Apply for a Blog
Please note that the posts on The Blogs are contributed by third parties. The opinions, facts and any media content in them are presented solely by the authors, and neither The Times of Israel nor its partners assume any responsibility for them. Please contact us in case of abuse. In case of abuse,
Report this post.

Pennsylvania’s so-called “Stand With Israel Act,” a proposed bipartisan bill (House Bill 1018) would prohibit funding to an institution of higher education that engages in a boycott against or divestment from Israel. The bill is one of several currently being debated in legislatures in Israel and across the United States to sanction those who engage in boycotts against Israel. As an academic who has actively opposed the Boycott Divestment and Sanctions (BDS) movement for the past two years, I think it’s a grave mistake to support the measure and others like it. Here’s why:

1. HB 1018 won’t help to defeat BDS; it will only exacerbate tensions on campus: BDS is not right now a mainstream issue but rather a product of the left, located in academia, churches, and unions. As Ari Shavit put it, “The battle is a battle for the left and the fight is a fight within the left, which means that anyone who despises the left can’t win it.” Although numerous student governments have considered divestment resolutions, few of them have passed, and no actual colleges or universities have divested, because Presidents and Boards of Trustees know that such actions would violate their fiduciary responsibilities. So, the problem is not actual divestment as much as it is campaigns for divestment. Those campaigns are for hearts and minds. Such efforts seek to change the opinions of young Americans about Israel. Even when specific resolutions fail, as Samuel and Carol Edelman explain, they succeed in “portraying it [Israel] as a pariah nation, an occupier, a human rights violator, a racist nation, and a denier of Palestinian Rights” (Case Against Academic Boycotts, 240). Rather than boycotting the boycotters, we need an equally strenuous effort to win hearts and minds.

2. We shouldn’t create our own boycotts if we don’t want others to boycott Israel: What we need, as those of us on the left who oppose BDS repeat endlessly, is to open dialogue and discussion – most especially with those with whom we disagree – rather than shut it down. If our struggle is, as I previously argued, primarily to win hearts and minds, we only lose moral ground by arguing that Israel shouldn’t be boycotted but should engage in boycotts itself. This means that we should not boycott, blacklist, shame, isolate, or defund the boycotters, as does HB 1018, in the manner of organizations such as AMCHA and Canary Mission. The attempt to silence alternative perspectives and to employ political litmus tests – in synagogues, JCCs, and Hillel International – are not only ethically wrong but also pragmatically counterproductive. They are seized on by people making anti-Semitic arguments that Jews use money and power to silence dissent. Within the academy, they violate the very arguments for academic freedom that are critical for countering academic boycotts. In addition, they tend to alienate students and young people who are only more drawn to that which is forbidden.

3. HB 1018 doesn’t distinguish between limited and full economic boycotts: HB 1018 defines “Boycott against or divestment from Israel [as] actions that are politically motivated and are intended to penalize Israel or otherwise limit commercial activities.” It draws no distinction between those who boycott all of Israel and those – including many Israeli and American Jews (David Grossman, Amoz Oz, Peter Beinart, etc.) – who boycott economic goods produced in the territories to urge the end of occupation and to press Israel to be true to its democratic origins. I do not support this type of limited economic boycott, but it is a profoundly divisive issue among the 150+ liberal scholars in the Alliance for Academic Freedom, a group I helped to found to oppose academic boycotts and to promote empathy in the debate over the future of Israel and Palestine. By penalizing those who engage in limited economic divestment, HB 1018 will further alienate those on the left – both Jews and non-Jews – from the mainstream Jewish community.

4. HB 1018 will have a chilling effect and might also defund higher education: HB 1018 demands that the Commonwealth cut off “funding of any kind to an institution of higher education that engages in a boycott against or divestment from Israel.” Since no institution of higher education has actually divested and, but for dining services briefly not ordering Sabra hummus, none has engaged in boycotts, perhaps the only real consequence of the Pennsylvania law, like similar ones in Illinois or Israel, will be a chilling effect on campuses. But what if the law conflates individual with institutional commitments to BDS? What if the Commonwealth defunds a school if one faculty member in American Studies engages in an academic boycott? What if a department maintains institutional membership in a professional association, such as the American Studies Association, that has endorsed BDS, or houses a regional branch of that association? What if a department boycotts an Israeli scholar, or if the institution’s student government passes a limited divestment bill? This legislation has the potential to be far more severe than earlier laws that have called for tax dollars not to support attendance at conferences where professional associations have endorsed BDS. If the Jewish community allies itself with such an effort it will lose credibility in opposing the boycott on academic freedom grounds, it will alienate many scholars (especially those on the left), and it will jeopardize much needed alliances with diverse students and their parents, especially those who rely on government-funded institutions for their education.

In addition to being an academic on the frontlines of fighting BDS, I am a Jewish mother of three daughters. I worry about the hostility they will face on campus. We all want to protect our children, especially from speech and actions that have in the last year, at times, crossed a line into anti-Semitism. I imagine that’s what Rep. Steve Santarsiero and others who have proposed similar bills intend to do. But the protection my girls – and all of our children – most need will not come from participating in Hasbara trips to Israel, waving the Israeli flag at a parade or rally, convincing them that anti-Semites are out to get them (although clearly anti-Semitism IS on the rise), or pretending that Israel is a utopia or a Disney Playland. Instead, it comes from educating Jews and non-Jews openly and honestly about Israel as a complicated nation that has had to make difficult choices and that, like most nations, has not always made the right ones. We need to expose all of our children both to Israel’s successes and its shortcomings -– including the occupation -– to help the nation to fulfill its aspirations of being both Jewish and democratic.

Silence and anti-normalization must not be met with further silencing and cutting of the purse strings. We need to engage more people in thoughtful dialogue toward co-existence, rather than dismissing and silencing one another with stereotypes, accusations, misunderstandings, and, yes, counter boycotts.

About the Author
Sharon Ann Musher is Associate Professor of History at Stockton University, a member of the executive committee of the Alliance for Academic Freedom, and author of Democratic Art: The New Deal’s Influence on American Culture (University of Chicago Press, 2015).
Related Topics
Related Posts
Comments