The Blogs
Alex Benjamin
Apply for a Blog
Please note that the posts on The Blogs are contributed by third parties. The opinions, facts and any media content in them are presented solely by the authors, and neither The Times of Israel nor its partners assume any responsibility for them. Please contact us in case of abuse. In case of abuse,
Report this post. 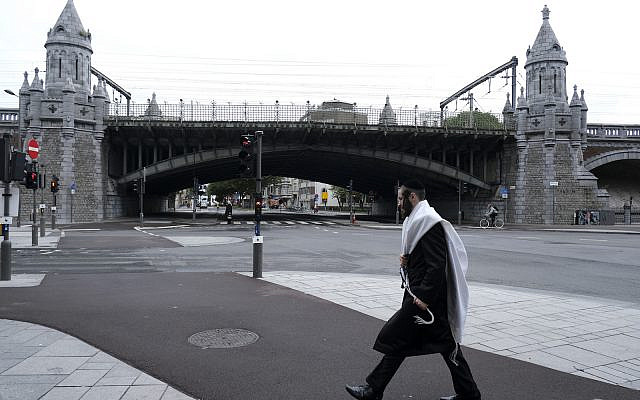 A member of the Jewish community returns from synagogue in Antwerp, Belgium, July 4, 2020. (Stock)

As director of public affairs at the European Jewish Association, I had our press release on the European Court ruling on Kosher slaughter in Belgium all prepared this morning. Our media team had it translated into French, Italian and German. I called the press office of the Court and had them send me the decision and statement the second it was announced. We were primed and ready.

The problem was I had the wrong press release ready. We were wrong.

We had anticipated that the Court would follow the opinion of the Attorney General who back in September said that bans on kosher slaughter were an impediment to the fundamental right of Freedom of Religion, enshrined in the EU’s own charter of fundamental rights.

We thought there was no way the court would slap a community already struggling under the twin weight of the pandemic and across-the-board spikes in anti-Semitism, never mind go against their own attorney general.

We were wrong. The court backed a regulation banning the slaughter of livestock that have not been stunned, putting its idea of animal welfare above freedom of religion.

The European Court of Justice can dress this up in all the legalese language it wants. A clear decision was made today. Jewish rights, Jewish practice, Jewish belief now enjoys second class European status. Behind animal rights, behind hunting.

I can assure you it pains me to write these words. I can also assure that I am in no way sensationalizing the issue. This is what the court decided. Of course, they won’t say it in my words, but as a Jew, I can tell you, that’s what it tells me.

You know the irony of the situation? I keep kosher-style, so a ban on kosher meat doesn’t even affect me or my family per se. But It affects me and every Jew across Europe profoundly, deeply, painfully, whether we are practicing or not.

As a people of faith, our traditions are not archaic remnants, but a living, breathing manifestation of our beliefs. Some of us may not choose to live by all the rules, but they are our rules. They make us who we are as a people. They have sustained us, given us our identity for millennia. It is not a matter of adjusting to the latest vogue trend, or “getting with the times.” This is about how we choose to live, and how we have lived generation after generation.

And just like that, with the stroke of a pen, at 9.42 am, when the court’s email hit my inbox, this entire glorious, proud and tenacious people were relegated to second class European status. Behind men and women on horses chasing foxes and rabbits around fields in order to tear them to pieces with hounds, and worse, behind the cattle that are led into the mass industrial complexes dedicated to their “humane” slaughter by a bolt to the head before the final cut is made.

I’m not going to go, in the short space afforded me here, into the bogus science surrounding slaughter that claims that slaughter without stunning is inherently cruel. I’m not even going to waste my breath on how some speak on the subject with such authority while ignoring the beauty and sanctity of thought that go into the kosher slaughter process; how I don’t’ know a single shochet — ritual slaughterer — who isn’t gentle and kind, whose first and only thought is making the death of the animal as swift and painless as possible.

Instead, I want to talk about the rank hypocrisy of Europe towards Jews. The well-meaning pats on the back when our synagogues are attacked, our people spat on, cursed at, murdered on European streets. “Europe isn’t Europe without Jews,” these people say. They commission reports, they publish them. They line up after a synagogue is firebombed. “We love you,” they say, “we are with you.”

Not for a split second does it occur to them how two-faced this is. How morally reprehensible it is to us to be told that we are important and that we matter, while they legislate our way of life out of existence in Europe.

The dam was broken today. This morning the Jew was once again relegated to second-class status in Europe. And the leaders said nothing.

About the Author
Alex Benjamin is the director of EIPA, a multi-disciplined pro-Israel advocacy Group based in Brussels, with offices in Paris and Berlin. He is also the Director of Public Affairs for EJA: European Jewish Association, a Brussels based NGO which represents and acts on behalf of Jewish communities across the EU and wider European continent, at the heart of the European Institutions and at bilateral level with Member States.
Related Topics
Related Posts
Comments