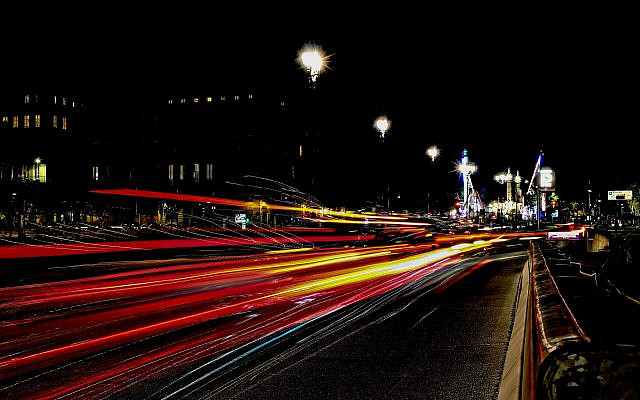 Elul is the final month of the Jewish year, when counting from Rosh Hashanah. The color associated with Elul is red. Red is the color associated with the sefirah of might, whose inner experience is fear or awe. Because Elul precedes Rosh Hashanah—the day of universal judgment—it has traditionally been a month of spiritual bookkeeping, during which we take stock of our spiritual and moral stand trying to prepare ourselves as best we can for Rosh Hashanah. Who is not stricken by fear before standing trial, as the prophet says, “The lion roars; who shall not fear?”1 So the color red seems to go well with the sentiment traditionally filling our experience of Elul. In modern life red has come to symbolize the word “stop.” But, as we all know, the trepidation and anxiousness we feel because of the impending Day of Judgment cannot cause us to freeze in our tracks; they have to lead us down a path of change.

But, let’s face it, isn’t that what we said last year, and the year before, and the year before? Isn’t it true that the first time we found out that there is teshuvah—there is hope for change—we did our best to change. But, the experience of so many years has taught us that change is difficult if not utterly impossible. We are not referring to adding another 15 minutes of Torah study every day (though that is hard too), but to real change in character, real change in personality; a real change in our relationship with the Almighty.

This is where Elul’s mazal—its spiritual energy—comes to play. The mazal of Elul is Virgo, the virgin, a symbol of freshness and newness. As always, to comprehend we must contemplate. In order to fully integrate the energy of Elul’s virginity into our psyche, we must first study—that is the way of Torah and Judaism. And, as always, we need to look at the first virgin mentioned in the Torah—in chapter 24 of Genesis. Eliezer, Abraham’s servant, was sent to find a suitable wife for Isaac, Abraham’s son. The first time that Eliezer sees Rebeccah, the Torah describes her: “And the maiden was very beautiful, a virgin and no man had known her; she went down to the wellspring, filled her jug, and came up.”4 When Eliezer asked her for water to drink, she not only gave him water, but also offered and then proceeded to water all of his camels. Clearly, this was no ordinary girl. The sages tell us that Rebeccah was only 3 years old at the time. How could such a young girl have the self-confidence to even attempt to water an entire caravan?

To fill the gap in our understanding, the Chassidic commentaries5 note that Rebeccah’s greatest attribute was her might. As noted, might and the color red (Elul’s color) definitely go together. Red is the color of blood and on the one hand symbolizes the strength needed to control one’s inclinations, in the idiom of the sages: “Who is a warrior? One who conquers his inclination!” (as such, red indeed symbolizes the power to stop). But, red also symbolizes the heat and strength of one’s convictions; the heat that catalyzes all movement. The source of Rebeccah’s might was her ability to guard her virginity, or, as it is euphemistically referred to by the Torah, her “source of blood.”6 She grew up in a promiscuous environment, in which tremendous self-conviction was needed to stick with one’s ideals. In addition, when the moment came for her to accompany Eliezer back to Abraham’s household, she met her mother and brother’s opposition with characteristic defiance; she said, “I will go” and meant, “I will go—with or without your consent.” In fact, Rebeccah’s adamant reply, “I will go” (אֵלֵךְ ), in Hebrew, equals “red” (אָדוֹם )! Rebeccah’s might is the symbol of virginity.

But, virginity is not only a physical state—it is a state of mind. There are various explanations for the origin of the word “virgin” (בְּתוּלָה ) in Hebrew. One of these is that it stems from the word for “daughter” (בַּת ), with additional suffix letters (ולה ) that emphasize youngness. But, the numerical value of these suffix letters is 41, the same as the value of the word “mother” (אֵם ). Thus, the word “virgin” (בְּתוּלָה ) equals “daughter mother” (בַּת אֵם ). The Hebrew virgin suggests a woman who is both a daughter and a mother, indicating that it is not limited to a state of physical virginity.

Likewise, we find that Abraham regarded Rebeccah as a symbol of eternal virginity. The sages tell us7 that he minted a coin on whose face there was a depiction of an old man and woman and on whose back there was a depiction of a young man and a virgin. Rashi explains that the old man and woman refer to Abraham and his wife Sarah, while the young man and the virgin refer to Isaac and his wife Rebeccah. Throughout her life, Rebeccah continued to exercise her might in order to surmount the challenges her life presented her with and to do so, she continuously called upon her inner virginity.

As we now enter the month of teshuvah and soul-searching, we can call upon the special mazal of this month, virginity in order to find renewed conviction and strength within ourselves. Conviction to ward off foreign influences that try to seduce us away from our heritage as Jews (or, as the case may be, as righteous gentiles dedicated to the seven Noahide laws) and strength to fight and win the battle against our own seemingly deep-rooted failings.

May we all be inscribed in the book of life and health for a good and sweet year.

3.     Note that this year is 5768, but the thousands are not normally noted when referring to it.

Photo by Baptiste BOUCHON on Unsplash