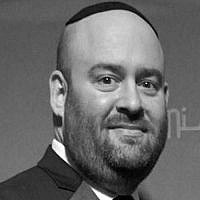 When Martin Luther nailed his 95 Theses to the door of All Saints Church in Wittenberg in 1517, he launched a schism which would forever change Christianity. Before long, the schism became an all-out war, and the inevitable cruelty that followed brought to Europe the brutal slaughter known as the Thirty Years War.

It is safe to say that for many decades, there were few more deadly adversaries than the Catholic and Lutheran Churches. It is also safe to say that there were few more murderous antisemitic movements in the 16th century than the Catholic and Lutheran Churches. This was the height of the Spanish inquisition, when hidden Jews were beleaguered, found out, tortured, and burned; when cities and states across Catholic Europe extorted, raped, exiled, murdered, shamed, and denigrated Jews wherever they lived.

This was also the time when Luther, quickly discovering that the Jews had as little interest in his Christianity as they did in Rome’s, turned on them with a viciousness that would have made Torquemada proud. He wrote in ‘The Jews and Their Lies’ that true Christians should set synagogues ablaze, expropriate any money or property that hadn’t already been taken from the Jews, prohibit Rabbis from teaching or sermonizing, destroy Jewish homes, burn Jewish holy books, and set every Jew to harsh, forced labor.   Luther wrote that Christians were “at fault in not slaying them (the Jews)”. The record of expulsion and murder of Jews toward the end of the 16th century in proto-German states was intense, and it didn’t really abate until the late 18th century. It picked up again at the end of the 19th and culminated in the broad use and great praise for Luther’s work by Nazi luminaries like Julius Streicher and Heinrich Himmler.

Grand Inquisitor Tomas de Torquemada died in 1498, Martin Luther in 1546. One oversaw the persecution, torture and murder of Jews personally, and the other advocated and encouraged it among his followers. They both rationalized it through ‘faith’, but their paths were as divergent as night and day.

I’m a history nerd; I always have been. I am a believer in Karr’s brilliant phrase ‘plus ca change, plus c’est la meme chose’ – the more things change, the more they remain the same. So, it was not hard to find a parallel this month when I read the recent statement by Professor Marc Lamont Hill, lecturer at Temple University and host at Al Jazeera English.

In 2018, Hill told listeners that “Palestine must be freed from the river to the sea”, explicitly calling for Israel’s elimination. This week, he told a Zoom conference hosted by the Democratic Socialists of America that in his view, the Black Lives Matter movement is and should be “very explicitly talking about the dismantling of the Zionist Project” and “explicitly embracing BDS on these grounds”. Expulsion (and consequential murder), destroying Jewish identity and culture, and waging economic war on the Jewish state. These are what Hill continues to advocate.

Earlier this month, I also spent time I cannot ever get back following the sad, mad, and dangerous saga of Representative Marjorie Taylor-Green, of Georgia’s 14th district. Ms. Greene has a long history of championing and supporting the Q-anon conspiracy theories grounded in antisemitic thought and tropes. Among her more conventionally kooky tweets, posts, and likes, she has discussed space lasers deployed by the Rothschilds (read: Jews) to burn a huge swath of California; in 2018 she shared  a video decrying ‘Zionist supremacists’ for bringing immigrants to Europe to overcome its white population; she uses the well-worn trope of calling the Jewish George Soros a Nazi; and she supports the actions of a violent movement demonstrably filled with white supremacists, neo Nazis, antisemites, and racists.

Much as their 16th century forebears did, Hill and Taylor-Greene take vastly different paths. In their divergent ways, they stand up for real or imagined grievances. They insinuate themselves into the intellectual or rhetorical leadership of their movements. They do their best to draw in those who are not objectively and sufficiently informed towards their angry perspective. And then they deploy the ancient canard, the antisemitism that generations of evil people, back to Luther and Torquemada and far, far before them have used to advance their agendas, slaking their thirst for blood and fire.

I’m not even discussing the vile, violent antisemitism of Islamist radicals and their American cousins like Louis Farrakhan, but they are a part of the historical equation too. As I’ve written before, and as the worlds most expert voices on antisemitism have said, we are beset on all sides.

Jewish identity and Jewish lives are threatened. Here. Now. And it is entirely irrelevant to that fact that you supported a Tea Party agenda or a Socialist one. The antisemites don’t give a damn. They want to advance their own agendas at your expense as a part of the Jewish people, pointing at you, in the age-old way, as the root of society’s evils.

If you live and breathe tikkun olam, there’s no amount of fixing the world that will obscure from your putative progressive friends the fact that the national liberation movement of your people is thriving and succeeding despite its serious problems and challenges, and despite the best efforts of our enemies in the intersectional anti-colonialist post-modern radical community. Even more maddening, our Jewish immigrant community overcame many challenges AND extended a hand to others, instead of forever marrying their legitimate grievances to dangerous political movements. It infuriates them. YOU infuriate them.

If you want to advance the MAGA agenda there’s no getting around the fact that many of your peers base their beliefs on conspiracies that paint you as the devil just as surely as Luther did. They still see you as manipulative, greedy, and controlling. And the most angry among them will still feel empowered to walk into your shuls and open fire on your friends, cousins, grandparents, on YOU.

The saving grace of this moment in history is that unlike 500 years ago, we are not powerless. We have a voice. We have resources, we even have friends. We have a sovereign, strong Jewish nation in the ancestral land of our forebears. We are, as the saying goes, not so easy to %#%@ with anymore. But to truly deploy our greatest strengths we must address our greatest weakness, which has plagued us since before the exodus from Egypt. We can’t fight each other, hate each other, cancel each other. There are enough adversaries out there ready, willing and able to fight us, hate us, cancel us. There is an unimaginable strength in a united Jewish people. Strength to build, strength to learn and teach, strength to be compassionate, and strength to remember. Enabling all of these, in a manner our ancestors couldn’t even imagine 500 years ago, is the strength to defend our people on physical and rhetorical battlefields, to deter, deny, and defeat those who countenance or actively seek our destruction.

I’ve committed to this course of action, to reach out my left and my right hand to my brothers and sisters, together to be a sword so strong our adversaries may have second thoughts, and to be shielded when they attack us anyways. I hope that you can, and you will too.

About the Author
Ari Rosenblum is the Director, Community & Donor Relations at the Focus Project, a think tank addressing Israel and anti-Semitism issues in the US. He also serves as CEO of Rosenblum Strategic, consulting to non-profits and philanthropists. A senior professional with experience at several leading Jewish institutions, Ari has written, lectured and educated on Israel advocacy, anti-Semitism, and Jewish thought for over 20 years. He lives in New York.
Related Topics
Related Posts
Comments